TURKEY-USA. End of an alliance

Ankara’s longstanding alliance with Washington and the West may have entered its terminal phase, says Khurshid Dalli 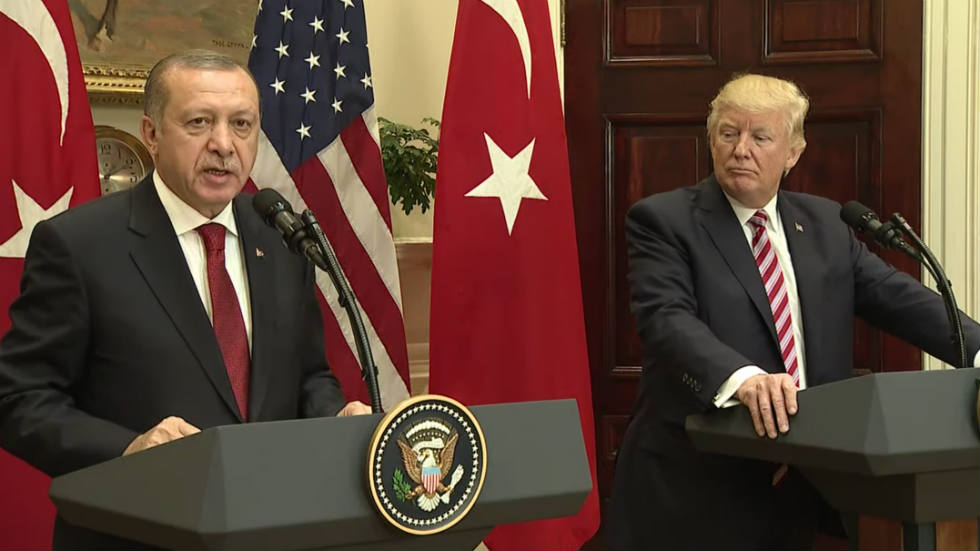 by Khurshid Dalli – al Araby
Turkish President Recep Tayyip Erdogan is deeply convinced that the U.S. administration wanted him dead, or at least under arrest, had last summer’s military coup succeeded. However, Erdogan, who has visited Moscow a number of times since, and has signed strategic deals, such as the purchase the S-400 anti-missile defense system and other similar oil pipelines and nuclear reactor deals, continues to visit Tehran and coordinate with it against an independent Kurdish state, and against the developments initiated by his former ally [Iraqi Kurdistan Province President] Mas’ud Barzani.This same Erdogan has ordered his government to adopt an equally harsh in response to a U.S. decision to suspend issuing U.S. visas to Turkish citizens. In fact, he has gone even further and arrested a second U.S. Istanbul Consulate employee, in an expression of defiance and insistence on equal treatment.This represents behavior the likes of which we have never witnessed ever since Turkey headed Westward and joined NATO in 1952, linking itself strategically to the Western Atlantic system, and playing a proxy role in confronting both the former Soviet Union and the Islamic world.On the other side of the divide in Washington, no one is complying with Ankara’s persistent demands to hand over the preacher Fethullah Gulen whom Turkey accuses of organizing the failed coup. Moreover, the administration continues to ignore the Turkish government’s insistent demands to end U.S. arms’ support for Syria’s Kurds. Instead, it has continued to deliver more arms to them, deploying its forces accompanied by the YPG (Kurdish People’s Protection Units) along the Turkish borders, excluding Turkey from joining in the battle for Raqqa, and relying on the SDF (largely Kurdish Syrian Democratic Forces) alone in this major battle.

At the bilateral level, Turkey is finding it extremely difficult to secure anything or any American position that would demonstrate that the two countries’ old alliance is still in good shape. In fact, it is even finding it difficult to secure arms and spare parts as required by U.S./Turkish military agreements, especially for its F-16 fighter aircraft. In this manner, the disagreements between Washington and Ankara are worsening with each passing day and accumulating with the passage of months and years, so much so that we seem to be on the verge of an open-ended crisis that threatens a strategic divorce.

The fact that Turkish/U.S. relations have reached such a point of tension stems from Turkey’s realization that it is no longer strategically linked to the West, whether to its American or European part, and that it has strategic interests that link it to Russia and Iran for political, economic, and security reasons. This is why its foreign policies have become more daring. And, since it feels that it has a spectrum of strategic options, it now believes that the U.S. has adopted a hostile position, akin to an enemy lying in wait for it.

This is particularly acute when it sees the U.S. backing the PYD (Syrian Kurdish Democratic Union Party), that is the PKK’s (Kurdistan Workers’ Party’s) ally. It also senses this when the U.S. refrains from handing over Gulen against whose supporters the Turkish authorities are waging a ferocious campaign. In fact, anyone scrutinizing the Turkish media these days would sense the extent of Turkish hostility towards the former American ally.

It is clear that despite their strategic and vital role for both sides, Turkish/U.S. relations are no longer determined by the same rules that governed them during the Cold War. Washington no longer behaves as if it is leading an alliance or an axis, as much as it seems to be motivated by its own narrow interests and agenda, even if they may conflict with those of its allies. Moreover, Turkey today is no longer what was in the past, a mere frontline policeman or police station for the U.S. and NATO. Erdogan has his own aspirations and ambitions that go beyond the U.S.’s vision.

Amidst the changes on both sides, the old system of relations is breaking down, but without it being clear whether this will bring this historic relationship to an end. But what is certain, is that it has moved on to a new phase as far both parties’ roles and functions are concerned.