Lights and shadows on the Doha-Ankara axis

The upcoming setting up of a Turkish base on Qatari territory poses major concerns over how such a cooperation may impact the regional scenario. From Erdogan’s ‘neo-Ottomanism’ to the fourth NATO power in the Gulf; and from the strengthening of a Sunni front to a possible mediating role for Doha 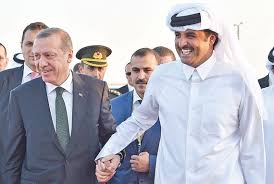 Rome, February 4th, 2016, Nena News – On 2 December 2015, when president Recep Tayyip Erdogan announced the setting up of a military base in Qatar,some analysts noticed how Turkish troops’ coming back to the Gulf – exactly one century after the Ottoman withdrawal from the Arabian peninsula – could symbolically confirm Ankara’s nostalgic regional ambitions. A few weeks later, when the beheading of the Shiite imam, Nimr al-Nimr, in Saudi Arabia officialized the latter’s rivalry with Tehran, Turkish-Qatari cooperation could rather feature as a Sunni achievement. Prompting criticism among Iranian commentators over how Ankara’s foreign policy had turned sectarian. Finally, in the light both of the recent diplomatic crisis with Russia and of the widening rift between the Atlantic Alliance and Moscow, others focused instead on the fourth NATO power in the Gulf, and on how the Ankara-Doha axis could have ‘sealed’ the area in anti-Russian sense.

According to official sources, Ankara will deploy from 3,000 to 5,000 men in Qatar; among ground troops, air and naval forces. It will then provide Qatari army with military training and will share intelligence information relating the two countries’ mutual goals. In return for military protection, Doha will shore up Turkish economy after Ankara’s break with Moscow (roughly $ 3 billions losses on tourism) and shall guarantee gas furniture, if the latter would decide to close taps to Turkey.

Yet, the reason why a military deal between Turkey and Qatar keeps on raising major concerns over the region’s future is that none of the above mentioned hypothesis could automatically exclude the others. To put it differently, the upcoming Turkish presence in Qatar – where is also located the main US military base in the region – certainly occurs with Washington’s consent and within the framework of a broader NATO strategy; though it’s not fully independent from the regional clash between Tehran and Riyadh. Similarly, while the Saudi approval suggests a Sunni front’s regrouping in anti-Iranian sense, we shouldn’t equally forget the autonomy that both Ankara and Doha managed to gain since 2011.

In other words, besides some convergent strategic interests, Turkey and Qatar share a shrewd foreign policy; especially from the Arab revolts’ aftermath onward. Regime collapses in Tunisia, Egypt and Libya, matched by a worsening Syrian crisis and Washington’s progressive withdrawal from the Middle East, freed indeed greater spaces for rising regional powers. Spaces that both Recep Tayyip Erdogan and Emir Sheik Hamad bin Khalifa al-Thani were keen to fill.

The first, initially more cautious and diplomatic on Libya and Bahrain, took an increasingly unscrupulous posture towards Syria:unconditionally supporting the opposition and unilaterally opening its borders to thousands of foreign fighters. The second, who extensively funded rebel groups in Libya and Syria – and the Muslim Brotherhood in Egypt – was eventually forced to abdicate in favour of his son Tamim. The move featured as an attempt to calibrate an aggressive foreign policy, which had both provoked Cairo and Riyadh’s enmity, and many international actors’ distrust. Since his rise to power, Emir Sheik Tamim bin Hamad al-Thani opted instead for more neutral and less intrusive policies;promoting diplomacy whileshying away from Saudi-sponsored sectarian logics.

To this extent, Doha gave show of extraordinary balancing skills.It mediated for hostages’ release in Syria, Lebanon and Yemen;it conserved diplomatic ties with the Shi’a universe and it didn’t opposed Iran’s nuclear deal either. On the contrary, firmly committed to gain a prominent regional role, Ankara gradually abandoned neutrality and became increasingly involved in the Syria; where along with Saudi Arabia it now represents Iran’s main antagonist. The downing of a Russian jet in Turkish skies, late in November, eventually widened both such polarisation and the gap between NATO and Moscow.

Within this context, Turkey-Qatar renewed cooperation was justified as a solution to face ‘common enemies’. Yet it fits into a much more tangled pattern. A pattern of alliances and rivalries, where nothing is reducible to the pact’s bilateral nature and everything remains uncertain if measured on the political and religious rifts featuring in the region. While Syrian talks difficultly unfold in Geneva, it is thus safe to question whether – and how – such a controversial alliance would impact the conflictscurrently raging on. From Damascus to Sana’a and from Tripoli to Baghdad. Nena News