What’s next for Turkey?

With the Justice and Development Party losing its parliamentary majority in the general elections, a viable coalition is now unlikely and all signs point to a political crisis. 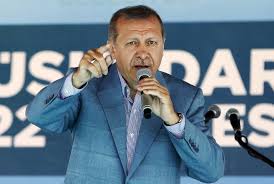 By noon Turkish time on June 8, 96.6% of the ballots in the more than174,000 polling stations in Turkey’s parliamentary elections were counted. The results are in: The ruling Justice and Development Party (AKP) has lost its parliamentary majority and the pro-Kurdish Peoples’ Democratic Party (HDP), the new darling of Turkish pro-democracy forces and liberals, has passed the undemocratic 10% threshold with a 13.1% share of the vote.

The distribution of seats in the new Turkish parliament is as follows:

Turnout was very high, with 86% of the electorate voting. This means some 3% more voters participated this year, compared with 83.16% in the 2011 general elections.

There is no debate that the victor this year is the HDP. The loser, just as certainly, is President Recep Tayyip Erdogan, in what is widely seen as a tacit referendum on his presidency. Elected to the post less than a year ago with 52% in the first round, Erdogan had vigorously campaigned for a strong following to enable amending the constitution to give Turkey a presidential system and himself executive powers.

Selahattin Demirtas, the rising Kurdish star of Turkish politics, said in his victory speech late on election night, “As of this hour, the debate about the presidency, the debate about dictatorship is over. Turkey averted a disaster at the brink.” His statement was met with the cheers of a jubilant crowd. Addressing Erdogan, the crowd said, “We prevented you from becoming the president [you wanted to be].”

In the beginning of the campaign, Erdogan sought 400 seats for the AKP. Then, he lowered his hopes to 330 seats, the number necessary to hold a referendum for constitutional amendment. Finally, in the last weeks he resigned himself to 276 seats, the minimum majority to form a single-party government.

The result is clear: The AKP lost not only around 10% of its previous support, but despite being the leading party, lost nearly 70 seats and fell 18 seats short of the number needed for single-party rule. For the first time since 2002, the AKP, which had won with safe margins in 2007 and 2011, lost its right to form a single-party government.

This significant setback for Erdogan and the AKP immediately gave way to speculation on what is next. Since there can be no single-party government with the current distribution of the 550 parliament seats, a coalition of parties must receive a vote of confidence and start running the country. Another option is forming a minority government if there is a supportive consensus. Needless to say, any such government will be at the mercy of the parties it has to count on.

Under Turkey’s constitution, the president can call for another election if the parties fail to form a government and receive a vote of confidence within 45 days. The election must be repeated within three months of that period.

Erdogan, however, still holds some cards to play, though he might be reluctant to act because a redo would be double-edged sword for him and the AKP.

The election results are indicators of Turkey’s new balance of power, which is not likely to change in three months. And if it does, it might change further to the detriment of the standing of Erdogan and the AKP, since it is now obvious that Erdogan can be stopped and the AKP is no longer invincible.

One of the first consequences of the elections will be an internal debate in the AKP. Although the AKP chairman, Prime Minister Ahmet Davutoglu, made a victory speech from the balcony of the AKP headquarters in Ankara, his remarks were far from convincing.

A tweet that circulated widely read, “Somebody should remind Davutoglu that they are not in power anymore, lost 10%, nearly 6.5 million votes and dropped from 311 seats to 258.”

Diken, an influential digital media outlet, reminded readers that Davutoglu stated on May 9 that if the AKP does not win the elections with a parliamentary majority, he would “resign on June 8.”

A debate that may erupt among the AKP ranks will possibly draw former president and party founder Abdullah Gul back to the AKP ranks. The blame game will be played: Is it because of Erdogan or his “inadequate” successor, Davutoglu? This lack of unity makes the option of a minority AKP government quite a weak possibility with Davutoglu at the helm, even if he manages to stay there.

It is too early to tell what Erdogan’s game plan will be. For the first time in months, he did not appear before the cameras and made only a sober written statement the day after the election. Whether he will push for a change in the AKP leadership, or the ranks of the party will rise against him, is too early to tell. None of these possibilities can be ruled out at the moment.

Arinc suggested June 8 that the three opposition parties — the CHP, MHP and HDP — form a coalition government. However, perhaps inadvertently, MHP chairman Devlet Bahceli declared on election night that the MHP will stay out of any coalition, proposing an AKP-CHP-HDP coalition instead. He also stressed that the MHP is ready for an early election.

The HDP leadership has also released a statement ruling out any coalition with or any support for the AKP. No coalition involving both the HDP and the MHP seems viable or at all likely.

The AKP is on the verge of an internal crisis and appears a shell-shocked political force in decline. A coalition with the AKP would be a fatal spider’s kiss for the ascending parties or for the CHP, which did not make any gains but maintained its status in Turkey’s complex political equation.

All signs point to a political crisis or impasse for Turkey. There is at this very moment no likelier alternative, in terms of a coalition government, a minority government or a new election cycle.

We are in for intensive political maneuvering. The passage of time might be accompanied by dire economic developments that would further complicate a way out based on a national consensus. Nevertheless, none of these uncertainties came as a surprise. They were all predicted.

No matter what is in store for the days to come, it is a day for celebration in Turkey for a very simple reason: On June 7, the worst was averted.