West Bank. Are the Israeli authorities really against hate crimes? 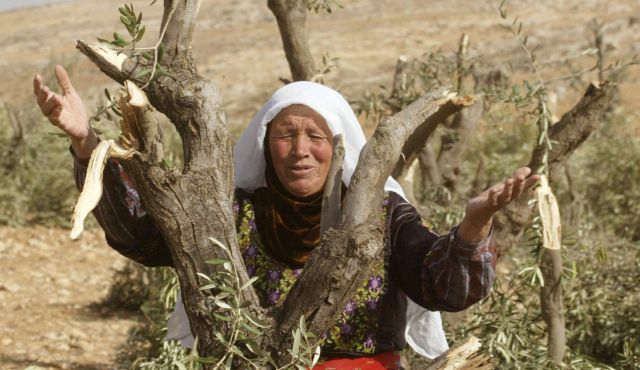 Roma, 5 maggio 2014, Nena News – Is there a connection between the regular harassment of schoolchildren by settlers from outpost X and the vandalism of Palestinian trees near outpost X? According to the IDF, the answer is no. So we learn from an April 28 deposition by Gilad Lev, who last year was a battalion commander in the southern Hebron Hills area. And do the police know what the “hilltop youth” are? No. So we learn from a March 25 deposition by Shmuel Jerbi, a commander in the Judea and Samaria District Police Nationalist Crime Department.

The statements were submitted for a preliminary hearing in a lawsuit that was heard Sunday before Jerusalem Magistrate’s Court Judge Einat Avman-Muller. The plaintiffs are the Amour family from the town of Yatta in the southern West Bank. In May 2013, half the trees in their orchard near the village of Al-Tawani were destroyed by unidentified vandals. This was preceded by two similar incidents in 2006 and 2011.

Call it the “Amour test” of the sincerity of the declarations by the authorities against hate crimes. The first parts of this test took place and were already reported on in this paper (December 26, 2013 and February 14, 2014). You give the grade, we’ll give the reminder.

The IDF did not accede to the Amour family’s request for lighting to be installed around the orchard to prevent future vandalism, supposedly because the family “chose to bring the matter to the legal system.” (So what? The lawsuit concerns something that already happened, the request for lighting has to do with the future.)

The state prosecutor, via attorney Moshe Willinger, argued that the plaintiffs themselves were to blame for the vandalism of their orchard since they had not installed lighting on their own (this in Area C, where just pitching a stake in the ground, not to mention connecting to the electricity grid, entails endless amounts of red tape for Palestinians).

The police closed the investigation into the vandalism “for lack of evidence,” even though army trackers found footprints leading directly from the orchard to the home of a settler named Yissachar Mann in the nearby Maon Farm outpost.

Ahead of the hearing the family’s attorney, Itai Mack, asked the sate (i.e., the police and the IDF) to respond to 38 questions in a deposition. One of the questions was: “Please confirm that Yissachar Mann is known to the security forces and the police from previous incidents.” The police documents describing the May 2013 vandalism note that Mann was previously arrested and convicted.

The court’s online archive contains an indictment by the Judea and Samaria District Police against Mann and others who were armed, for throwing stones at farmers from Al-Tawani and at leftist activists. The archive also contains a record of a case in which Mann was convicted in Jerusalem of “crimes against public order.”

But police commander Jerbi’s response to Mack’s question was: “The question is not clear.”

When Mack asked if the state “is aware of the presence of ‘hilltop youth’ and far-right activists at Maon Farm,” Jerbi answered: “The term is not clear. Jewish settlers live at Maon Farm.” Asked by Mack whether Maon Farm is an illegal and unauthorized outpost, this was his answer: “That is a legal question.” In other words: The violation of the law by their very presence there is a theoretical and abstract matter.

It was harder to obtain a statement from the IDF. Major Shai, an investigator for the Defense Ministry, wrote with total assurance: “… I conducted a review with all the relevant parties in the IDF, and found there was no IDF involvement in this event (of May 2013).”

The discrepancy between the results of this “review” and the reality led Mack to write another letter requesting that the state complete the deposition. The former battalion commander in the area, Gilad Lev, was recruited for this task.

Asked how the lessons of the previous events of 2006 and 2011 were implemented,” Lev replied: “Learning lessons [from incidents] is a matter of routine for the defense forces.”

Yet April 15 to April 28 saw a sharp increase in the number of harassment incidents by West Bank settlers on Palestinians − from an average of five incidents a week to nine. Attacks against A-Tawani villagers by their Jewish “neighbors” (who mostly come from Maon Farm) are a regular event. Between 2005 and 2013, Yesh Din filed 35 complaints with the police regarding attacks on Palestinians by Israelis in the A-Tawani area. These incidents included beatings, destruction of trees, arson, attacks on shepherds, the killing of livestock, stone throwing and trespassing.

Because of the regularity of the abuse by the Maon Farm settlers, since 2004 the IDF has been escorting a group of schoolchildren from two small nearby villages on their way to school in A-Tawani and back. Sometimes the soldiers don’t show up for the assignment and the terrified children make their way through the rocky hills below Maon Farm alone.

This is what happened on April 24. Two Israelis on quad bikes appeared from the direction of Maon Farm and hurled stones at four children and their mother as they returned from school without a military escort. A 7-year-old girl was hit in the head and had to be taken to hospital for stitches.

Lev’s response to Mack’s request for confirmation that “IDF soldiers escort schoolchildren to school in A-Tawani in wake of violence from Israeli extremists”: “The question is not relevant to the lawsuit, which is about vandalism of olive trees”. Nena News.