Israel has used all kinds of methods, ranging from claims of security concerns to legal pretexts such as the absentees property law, to confiscate apartments belonging to Jerusalem residents and give them to settlers. The latest method used to take over dozens of apartments in the Silwan neighborhood was sale contracts through intermediaries. Overnight, these apartments became the property of Israeli settlers. 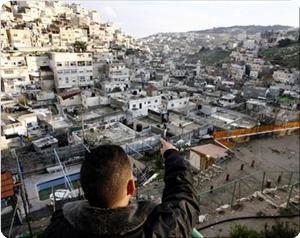 Ramallah, 8th of October 2014, Nena News – On September 30, the town of Silwan located south of al-Aqsa Mosque in occupied Jerusalem witnessed an attack by settlers through a legal pretext. Israeli Economy Minister Naftali Bennett called it a “historic achievement,” as Israel seized 26 residential apartments in eight buildings in the town.

Although Israeli settlers entered these vacant apartments as though they were the owners, Israeli police escorted them throughout many neighborhoods inside Silwan, resulting in confrontations with Jerusalem youth.

It is the first time that a seizure of apartments takes place on such a dramatic scale, which prompted the presidential spokesperson, Nabil Abu Rudeina, to describe it as “blatant Israeli aggression.” But there was no other option for “the president of the Palestinian Authority, Mahmoud Abbas, but to resort to international organizations.”
Jerusalemites in Silwan are asking, who sold and who bought? When did it happen and how did the apartments end up in the settlers’ hands? In answering these questions, accusations of selling the houses were leveled against people from Silwan and others from occupied 1948 Palestine. The name that repeatedly came up was that of Farid al-Hajj Yehia from the town of Tayibe.

Witnesses who saw what happened say they were surprised to see settlers surround the area and enter the apartments. Among them is Elias al-Karaki, 62, who says he has documents proving that his son, Nabil, sold a house in the Baydoun neighborhood to a Palestinian from 1948 Palestine called Farid al-Hajj Yehia seven months ago. He pointed out that the sale was finalized three months ago and the payment for the house was collected. Karaki is afraid that the life of his family is going to become hell now that the settlers have moved into houses near them.

Ashraf Serhan, whose family owns a five-storey building, said that his father sold a house two years ago to a person from the Sbeih family “on condition that the first party will have precedence to buy first if the second party wants to sell later on.” He, however, was surprised that the buyers are the settlers. According to a report cited by an information center in Jerusalem, a man by the name of Hani al-Abbasi sold his house to a person called Yousef Zawahra, who made additions to the house and left it only hours before the settlers came.

Al-Akhbar called the director of Wadi Hilweh Information Center, Jawad Siam, who said that there’s been no “direct sale to the settlers.” He believes that the apartments were bought through a fake US company called Kendall Finance or through “figures that hid behind charitable projects.” However, settlement and map expert in Jerusalem, Khalil al-Tafakji, said the houses were indeed sold, “and whoever says otherwise, let him bring something to refute the documents I have which prove that residents sold their apartments.”

In conjunction with the media hype that accompanied this incident, the Islamic Movement in 1948 Palestine was accused that one of its cadres is the intermediary for selling the apartments to the settlers. The Islamic Movement (northern branch), however, issued a statement saying that Jerusalem is entrusted to us and Farid al-Hajj Yehia was never a member of the movement and did not hold any position in it.

A statement was also issued by the Islamic Movement (southern branch) that described selling the Silwan homes “a heinous crime and a betrayal of God and country.” The statement hinted that al-Haj Yehia was terminated at al-Aqsa Association in 2010 and “charitable parties were informed of this with official letters at the time.”

Al-Hajj Yehia himself went on interviews in which he denied the news that was attributed to him. He said the issue has been “exaggerated in an unbearable way” stressing his willingness to go to Ramallah to be killed there for treason if it was proven that “one inch of Palestinian land was sold to any Israeli.” He said he bought a piece of property in Silwan “to prevent bloodshed (an issue of vengeance) between the Sbeih, al-Yamani and al-Karaki families.” He admitted, however, that the sale document which Karaki talked about regarding selling his son Nabil’s apartment is true “but I sold the house to a trusted person from Umm al-Fahm.” He went on: “Let’s say I sold this house to settlers, who sold the other houses?”

Tafakji believes that Israel is focusing its settlement attack on Silwan in an attempt to reverse the demographic balance and to settle the issue of the “Holy Basin” once and for all “because the town is located south of al-Aqsa Mosque. Israel claims that Jewish history began 3,000 years ago in what it calls the City of David in Silwan.

According to the available information, the number of settlement blocs in Silwan are 27 so far. They include about 88 housing units that were taken by settler associations either by claiming that they are Jewish property or under the pretext that it is absentee property or by sale as happened recently or by forging documents. Also, security excuses can be used for the same purpose.

Siam believes that most of the contracts that were signed by “those who were deceived can be repealed in court.” This was confirmed by attorney Mohammed Dahlah who said that a number of purchases conducted by the settler association Elad were previously repealed. Dahlah explains that the legal leeway is that the contracts themselves are not valid “someone who does not have the right to sell sold, or the property is publicly owned or the shares sold have not been divvied up among the owners.” In addition, there is sometimes the preemption right, especially for those who have the right to purchase the property such as the neighbors or those with privacy concerns.

Siam said they had proposed several projects for institutions and official Palestinian parties to cooperate with businessmen and encourage them to buy and invest in property in Jerusalem, adding: “We asked the famous businessman Munib al-Masri more than 15 years ago to buy a piece of property in Silwan before it was leaked to the settlers. The reply came from his office that the project has no economic feasibility.” Keep in mind that the Palestinian government’s budget for 2013 allocated to the Jerusalem Ministry is no more than 50 million shekels ($13.5 million). $130 daily for those who live in the Silwan homes

Settlers posted on social networking sites an announcement that the Elad settler association will pay 500 shekels ($135) daily to any settler who agrees to live in the houses that were overtaken by the settlers in Silwan on condition that he “knows how to use weapons and shoot.” The Israeli daily Haaretz published a report revealing that the percentage of settlers in Silwan is currently at 3.5 percent but could reach 18 percent of the total number of residents after the seizure of the latest residential apartments.

Observer of Israeli affairs, Mohammed Abu Allan, noted in an interview with Al-Akhbar the rise in the budget of the settlement department in the past two months from 54 million (~$15 million) shekels to 440 million (~$119 million). He thought perhaps this rise is related to the latest incident. Abu Allan underscored the importance of what Israeli prime minister, Benjamin Netanyahu, said about Silwan being Israeli land and that he will not prevent any Israeli from purchasing residential units anywhere he wants.