The Palestinian Authority is on the brink of collapse

Only achieving statehood could save the West Bank from an impending wave of violence, crime, chaos, disease, says major Palestinian report. 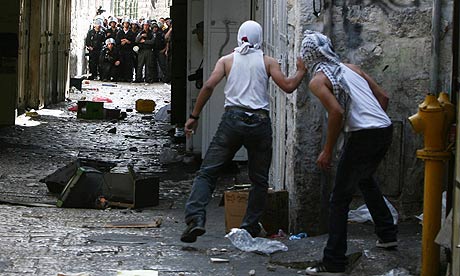 The breakdown of the Palestinian Authority would turn the West Bank into a violent, criminal, chaotic, disease-ridden place. But even though most Palestinians want the PA to survive, either for the sake of basic social order or personal interest, and although Israel dreads having to resume responsibility for 3 million West Bankers, President Mahmoud Abbas’ regime will collapse before too long if Israel continues to thwart Palestinian aspirations for independence.

This is the conclusion of a massive six-month study by the highly-regarded PalestinianCenter for Policy and Survey Research in Ramallah, directed by Dr. Khalil Shikaki.

A great many Palestinians have a deeply vested interest in the PA’s continued existence, Shikaki notes. Connections with the PA bring “financial well being, social and political status in society, and there are circles that depend on their relation to PA. Anything that happens to the PA will take all of that away from them. These could be organizations, business interests or individuals who have positions of power that allow them to reward sympathizers.

“If they could call the shots, they would do their best to prevent [the PA’s collapse],” Shikaki said, “But even those who have a vested interest in satisfying Israel, for the sake of preserving the PA, cannot do it for too long.”

If ordinary Palestinians still support the existence of the PA, it’s because they have a need for some kind of order, he adds. “People do not want to see themselves without a central authority that prevents chaos and anarchy in the streets, even if they have a lot of criticism of the PA and its functioning. But the Palestinians are willing to risk it collapsing completely, if it happens in the midst of a struggle for a change in the status quo. If there is a good reason for it to collapse, then [the attitude is] let it be.”

The PA is 20 years old, but voices questioning its efficacy were already being heard at the start of the second intifada in 2000. They’ve returned and intensified over the past two or three years, as it has become clear that the PA is not delivering on either of the two goals it was established to achieve: statehood and the provision of public services. Add to this the increasing economic difficulties and the rupture with the Gaza Strip, and the picture of failure is complete.

“The ‘Day After’ Final Report: The Likelihood, Consequences and Policy Implications of a PA Collapse or Dissolution” is unprecedented in its scope and willingness to grapple with this issue. More than 200 Palestinian professionals participated in the discussions that led to the 250-page report.

The PA could break up in one of three ways, the study concluded. One, the least likely scenario, is a voluntary decision by the Palestinian leadership to dissolve it. The second is collapse as the result of Israel’s punishing economic, military and political power, and political and economic pressure, mostly American, in response to Palestinian steps that violate the status quo, such as petitioning the International Criminal Court or leading a non-militarized uprising. The third possibility is a breakup that results from internal Palestinian unrest and rebellion.

Among participants, there are those who view the disintegration of the PA as a near certainty, given Israel’s refusal to reach a two-state solution in line with international principles and decisions. According to Shikaki, those who see the collapse of the PA as a positive thing are in the minority for now, and tend to be those who support a single, binational state. But it’s clear that the three main players – the PA itself, Israel, and the international community – are not interested in the PA’s disappearance.

Shikaki said he asked the Israelis “under what circumstances Israel might lose interest in preservation of the PA, and their assumption was that Palestinians are not stupid and don’t want to go too far so that we [Israel] would change our priorities.” This Israeli perspective seems to reinforce the position of Palestinian critics who claim that the PA serves Israel’s interests. Indeed, Shikaki says, “All Palestinians who participated in the discussion shared the view that Israel and the PA have a common interest in keeping the PA functioning. Palestinian society in general understands that the PA is able to exist as long as Israel is happy with it, and as long as Palestinians find it useful to them.”

Did the Israeli interviewees understand that Israeli policies were liable to topple the PA? Yes, Shikaki said. “They think that [Israeli policy] could worsen conditions significantly, but that Israel will step in at the last minute and prevent a collapse.”

Shikaki noted that all the participants assumed that “at all levels there will be an attempt to prevent a collapse.” Paradoxically, he said, “This gives each of the actors the comfort to believe that they can do a lot of harm to the other party without risking that other party’s collapse.” Thus, the Israeli-PA relationship becomes like a game of chicken, an analogy used in the discussions which focused on ways the Palestinians could force the Israelis to blink first.

If there is a voluntary decision to dismantle the PA, “Palestinians might seek to force Israel to either deepen its occupation, reverting to the situation that prevailed before 1994, or change its policies by seriously negotiating the end of its occupation, or unilaterally withdraw from most of the West Bank,” according to the center’s final document. Alternatively, in the event of a collapse resulting from external or internal pressures, “This expected [security] instability might force Israel to re-examine its options.”

The report concludes that the results of a PA shutdown would depend largely on whether the various components of the Palestinian leadership break long-time habits of poor planning, lack of transparency, excessive centralization, lack of consulting bodies and the immediate gratification of personal and sectarian interests. Preferably, the Palestinian leadership would decide to restore the status of the PLO and include Islamic movements in its ranks; decentralize planning and management and transfer those responsibilities to civil organizations and institutions; build an alternative management mechanism; or establish a government in exile.

Hamas would be big winner

These are some of the preliminary steps that participants in the study recommended to mitigate the severe repercussions of the PA’s collapse. These include economic damage to the public and private sector; widespread poverty; social and political disintegration; the spread of disease, with particular harm to children’s health; looting of infrastructure facilities; strengthening of tribes and clans; deepening of the rift between the Gaza Strip and West Bank; rise of armed gangs and security chaos; and a return to violence as the primary avenue of the struggle. One certain result is that Hamas, and in particular the Hamas government in Gaza, would be strengthened.

Participants in the study included university professors, current and former government ministers, legislators from all the factions, business people and executives of nongovernmental organizations. The looked at the effect of a PA shutdown on security, economy, Fatah-Hamas relations and political life, health, education, infrastructure, telephony and communications, local government, the judiciary, and the future of the struggle for independence.

The center also conducted interviews with 180 Palestinians to gain a deeper understanding of prevalent attitudes. In addition, Shikaki interviewed 12 Israelis from the military, Civil Administration, various political factions (though not from the extreme right) and research institutes, though Shikaki declined to name them.