The battle for Qalamoun

Fighting in the Qalamoun Mountain area near the Lebanese border with Syria is adding to tensions between Lebanon’s main political groups, writes Hassan Al-Qishawi. 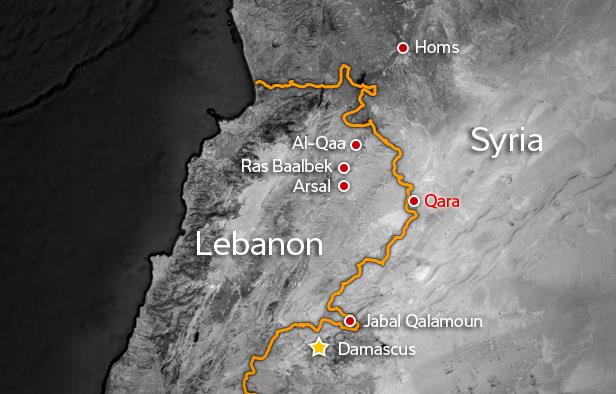 The ongoing battles in the Qalamoun Mountain areas near the Lebanese border with Syria have added to the tensions between Lebanon’s main rival groups, the Hizbullah-led 8 May Alliance and the Future Current-led 14 May Alliance.

Leading the battles on the Syrian opposition side is the Jaysh Al-Fatah (JF), or Army of Conquest, a temporary outfit that includes members of Al-Nusra Front and the Free Syrian Army (FSA).

The JF was formed only two months ago and has since made gains in its battles in the town of Idlib, against the regime led by Syrian President Bashar Al-Assad. Despite its name, the JF is not a standing army, but rather an umbrella group carrying out battles in which various factions may fight under one banner without mentioning their original affiliations.

In the Qalamoun battles, the JF has accused the Islamic State (IS) group of collaborating with the Syrian army and Hizbullah, a claim that is common in opposition circles although there is no hard evidence to back it.

It has been the strategy of IS to undermine the other armed groups in the country by attacking them when they are engaged in battles against the regime. Both the regime and Hizbullah have also refrained from attacking IS, either because they recognise its value as a bogyman that may make the Al-Assad regime more palatable to the outside world, or because of its actions to undermine the other opposition groups in general.

It was not long ago that the regime knowingly allowed a faction of IS to break into the Yarmouk Palestinian Refugee Camp and decimate the Aknaf Beit Al-Maqdis, an armed group believed to be affiliated with Hamas.

Sporadic fighting between Al-Nusra Front and IS has also taken place on the hilltops surrounding Arsal, a Lebanese border town that hosts nearly 100,000 Syrian refugees. According to unconfirmed reports, Hizbullah refrained from attacking IS positions during the latest round of fighting, but focused instead on Al-Nusra Front and the JF.

The aim of IS, analysts say, is to subsume all the other armed groups in the country, either by buying their loyalty or by coercing them into submission by attacking them and degrading their military capabilities. From the IS point of view, this makes sense as the group sees itself as a “caliphate” and therefore as the only legitimate military power in the country. Others must either submit to its authority or suffer the consequences.

As a result, the kind of alliances that Al-Nusra Front, the official Al-Qaeda affiliate in Syria, is making are not something in which the IS commanders are interested. Although both Al-Nusra Front and IS seem to act in cahoots from time to time, the relationship between the two is on the whole one of rivalry if not outright animosity.

It is not clear why Hizbullah had to go to war in Qalamoun at a time when rumours have it that negotiations leading to the release of Lebanese military personnel held by Al-Nusra Front and IS have been making progress. However, Hizbullah seems to be intent on maintaining a stronghold in this mountain region, perhaps fearing that regime forces may collapse there, leaving thousands of its fighters trapped across the border.

A Lebanese expert, speaking on condition of anonymity, said that Hizbullah had started the battles to lift the morale of the Syrian army after the latter’s loss of Jisr Al-Shughur, a strategic town in northwest Syria, earlier this month.

Hizbullah has reported major victories in the Qalamoun, boasting that it has seized large areas of land, including major strategic mountaintops. However, these reports have been challenged by the opposition, whose commanders say they have inflicted heavy losses on Hizbullah’s ranks.

Meanwhile, extremist militants from both Al-Nusra Front and IS continue to be holed up in various mountain areas on the Lebanese-Syrian border, especially near the city of Arsal. Their presence is a cause of concern to both Hizbullah and the Lebanese army, which is trying to prevent the Syrian conflict from spilling over into the country.