Fleeing the ongoing carnage of the civil war, Syrian rockers have found a new outlet for expression in Beirut 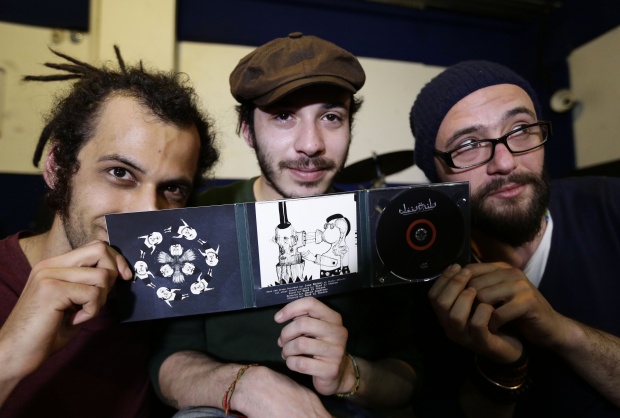 Roma, 29 aprile 2015, Nena News - Syrian rock bands fleeing war are finding safety and new fans in neighbouring Lebanon, where they are revitalising a Westernised scene with their focus on Arabic musical heritage.

Dozens of Syrian bands and independent artists have now become mainstays of the Beirut music scene, performing emotive and often bleak songs in front of concert-goers eager for fresh faces.

In a bright Beirut apartment, two members of Khebez Dawle, an alternative rock band from Damascus, practise surrounded by freshly hung laundry, balls of yarn and cups of tea.

“You’re still alive, under the siege?” sings Anas Maghrebi, the band’s lead singer, in their song “Ayesh,” which means “alive” in Arabic. “You loved and you grew up. You spent your life savings on a house — and now that house is gone. And you’re still alive.”

Syria’s four-year-old conflict has left more than 220,000 people dead and has forced millions, including artists and musicians, to flee to neighbouring countries. Many civilians in Syria live in areas besieged by the regime or armed groups, cutting off their access to food and medical aid.

While some Syrian artists sing about everyday challenges and societal pressures, many use their music to talk about their experiences of war.

Khebez Dawle — the Arabic term for Syria’s ubiquitous state-subsidised bread — say their self-titled first album, released in December, attempts to give a young man’s “narrative of what happened in Syria”. “We just tell the story as if we’re telling it to a friend,” Maghrebi tells AFP.

Khebez Dawle have much to recount about Syria’s war, which they fled in 2013, a year after a fellow band member was killed.

‘No pressure in Beirut’

They say arriving to the safety of Beirut breathed new life into the band after their friend’s death. “The main thing that allowed us to start up again was that we were in Beirut. Half the problem was gone,” Maghrebi says.

In contrast to Syria, where they faced violence and few venues, studios or opportunities for growth, rock bands see Beirut as an incubator for their talents.

“When we came to Beirut, and we saw that there’s no pressure here, we said we want to take advantage of everything. Everything we couldn’t have in Syria, we want to have here,” says Bashar Darwish, Khebez Dawle’s guitarist.

In Lebanon, Syrian musicians have made connections with producers, filmmakers, venue owners and financiers.

While practising in their cluttered single-room underground studio one day, the band got a surprise visit from their Lebanese neighbour.

But instead of asking them to turn their music down, Raed al-Khazen complimented Tanjaret Daghet on their hard rock sounds and eventually became their producer. “The opportunity that these guys got here, they would have never gotten in Syria,” says Khazen.

The Syrian bands are now a regular sight at Lebanese underground venues, where they say high-energy audiences have encouraged them.

“The audience here helped us out a lot because they’re willing to pay for a ticket to come see someone who writes their own music,” says Tarek Khuluki, guitarist for Tanjaret Daghet.

“We met so many people here who opened up our minds and made us say, why not?” says Khaled Omran, the band’s lead singer and songwriter.

“Now, there’s movement, there’s life. There are even mixed Syrian-Lebanese bands,” he says.

For Khazen, this positive influence comes from Syrian musicians’ strong link with traditional Middle Eastern music and their command of the Arabic language.

While Lebanese bands often sing in English, the Syrian bands tend to perform in Arabic, and use more traditional Middle Eastern scales and harmonies.

“This is what gives their music the depth that you don’t find much here,” Khazen says.

“The way they approach music, art, and musical instruments should be an example for Lebanese guys.”

“Now if you go look at the young music scene, there isn’t one scene in Lebanon and one scene in Syria,” he says.

“There’s a new scene for both”. Nena News