Israel’s bluewashing at this time of crisis serves to project a diplomatic and humanitarian face whilst covering its true nature, its crimes and aggressive policies towards Lebanon 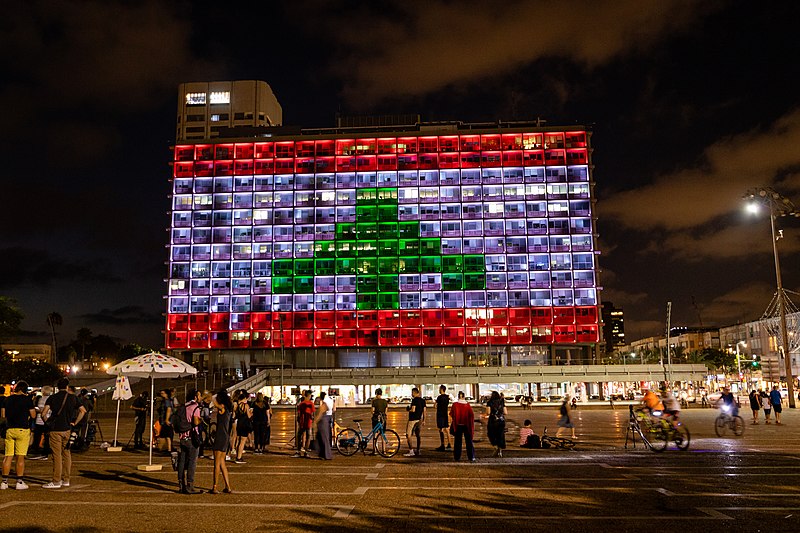 Rome, 11th of August 2020, Nena News – The explosion at the port of Beirut on 4 August looked and felt like a small nuclear bomb to the Lebanese, both for the damage and the emotional trauma and horror it has caused to the population. Coincidentally it happened only two days before the 75th anniversary of the world’s most horrendous act, when the United States detonated two nuclear bombs on the Japanese cities of Hiroshima and Nagasaki on the 6 and 9 August 1945.

For Lebanon, the explosion, its impact and its consequences felt like an atomic bomb had just gone off.  For the Lebanese and the entire region, it is not only a reminder of war but also of the volatile times we live in, pervaded by rampant corruption, untrustworthy politicians, and unpopular neoliberal policies.  All the while being aware of the fact that Lebanon is but one piece of the geopolitical chessboard, a dirty game they have no say in. The Lebanese people are now lost.  The uncertainty and hopelessness are devastating as much as it is heartbreaking for Lebanon, the Middle East and the world, although it might not seem that obvious on the surface.

The Lebanese people are of course in shock as they count their dead and injured, and so is the rest of the Arab world as the region has seen continued bloodshed over the past decades, for internal as well as external reasons.  The region has been at the center of the world stage in the struggles between the sectarian divides heightened by the invasion of Iraq in 2003, when the United States exacerbated these regional rivalries linked to western interests in the region; most notably, securing Israel’s primacy in the region at all costs and allowing it to impose its will on the Palestinians.

When amidst this tragedy salt is rubbed into the wound – by Israel disingenuously offering its help – it is even more disturbing and infuriating for the Lebanese. Lebanon, like Palestine and Syria, have all suffered at the hands of the Israeli army over the years.  Palestinians, Syrians and Lebanese know, like Israelis know, even if the rest of the world does not.

While the rest of the world may interpret Lebanon’s refusal to accept aid from Israel as another example of how the Lebanese are intolerant or non-accepting of Israel, the truth is much more complicated than that. People cannot clearly see this truth because of Israel’s ‘bluewashing’ in this case. The term bluewashing – with the color blue representing the United Nations flag, associated with humanitarianism – is added to the concept of ‘whitewashing’, which is a metaphor used to describe censorship of crimes, a polishing of one’s image, putting up a façade, and deflecting attention.

Israel’s PR strategies aim to project a clean image of itself, while hiding or taking attention away from its criminal policies, occupation, racism and interests, and to sidetrack from the criticism and condemnation it has been subjected to.

Israel’s bluewashing at this time of crisis serves to project a diplomatic and humanitarian face whilst covering its true nature, its crimes and aggressive policies towards Lebanon.  It also allows Israel to point its finger at its enemy, in this case Hezbollah, as the outgoing Israeli ambassador to the United Nations Danny Danon clearly stated when he said that the Lebanese people should now oust Hezbollah, as he has blamed them – without evidence – for the explosion.

Although the cause has not yet been determined, and might not be for a very long time, Israel is quick to offer answers. But let us remember that Lebanon has yet to find out the truth about the assassination of their most trusted and loved Prime Minister – the businessman that invested into rebuilding Lebanon after the civil war – Rafiq Hariri, killed on 14 February 2005.

The Lebanese President Michel Aoun has stated that there is a possibility of external links to the 4 August explosion, through a rocket or a bomb, because it was the biggest blast in Beirut’s history.  And if you ask the Lebanese people who they believe would have a vested interest in destroying the port, the city and the country – if external forces were at work – the answers would very likely include their southern neighbor, now selling itself as a possible savior through bluewashing.

The way the Lebanese people see it, and the way most of the Arab world sees it, is that by offering assistance Israel is pretending to care, when in actual fact Israeli Defense Minister Benny Gantz had just pledged to destroy Lebanese infrastructure following days of tension at the border.

At the same time, a former member of the Israeli Parliament, Moshe Feiglin, declared that the blast was a gift from God and that it was a spectacular show and a day to rejoice. The Israeli President Reuven Rivlin offered his condolences to Lebanon and the Lebanese flag was projected onto City Hall in Tel Aviv, as though the Lebanese people could be fooled into forgetting the renowned Israeli Dahiya Doctrine, which is a military strategy allowing for the destruction of civilian infrastructure by justifying that it is necessary to prevent Israel’s enemies from using it.

But this Israeli strategy is well known to the Lebanese, because it takes the name of a Lebanese neighborhood that was completely flattened by Israel in the bloody war waged against it in 2006.

The Lebanese cannot forget that in 2006 Israeli children were seen signing missiles that were going to be launched against civilians in Lebanon.  And in 1982, let us recall that Israel invaded Lebanon to attack the Palestinians there, laying siege to Beirut and brutally murdering between 15,000-20,000 people.  After Israel’s invasion in 1982 it occupied southern Lebanon for 22 years, until it finally withdrew following a UN resolution. Israel is the same country that has killed and injured tens of thousands of Palestinian and Lebanese civilians, and that has bombarded every piece of the country, targeting civilian areas and regularly violating Lebanese airspace and sovereignty.

But Israel has never hidden its intentions.  Former Israeli Defense Minister Naftali Bennett stated they would send Lebanon back to the Middle Ages if Israel had been attacked at the border by the Lebanese political party Hezbollah’s armed groups. This sentiment was repeated even when tensions escalated along Israel’s northern frontier with Lebanon and Syria, in the occupied Syrian territory of the Golan Heights, when a Hezbollah fighter was killed in an Israeli attack near Damascus.

Israel also regularly bombs Syria, and threatens Lebanon and the Palestinians, as their public statements show. Israeli leader Benny Gantz has proudly declared that Israel had destroyed the Gaza Strip and sent it back to the Stone Age.

These declarations and the reality of Israel’s history in the region clash with their attempted bluewashing.  The truth is that Israel is seen as a destroyer that brings humanitarian tragedies, not humanitarian aid.  Its offer of aid is simply viewed as a provocation and adds insult to injury.

Bluewashing is but one of the many propaganda tools Israel uses to look like the good guy.  However, every Lebanese knows that Israel does not care and actually celebrates their tragedy.  So tweeting condolences amidst this catastrophe only demonstrates to the Lebanese – and others in the Arab World – that Israel’s hypocrisy has no limits.