Israeli strike on the Golan: tactical achievement turning into a strategic burden

This is perhaps one of the rare instances when a tactical achievement turns into a strategic burden: only hours after their initial euphoria, Israeli officials became fearful and concerned, in the manner of someone who had just stepped on a mine and is waiting for it to explode. 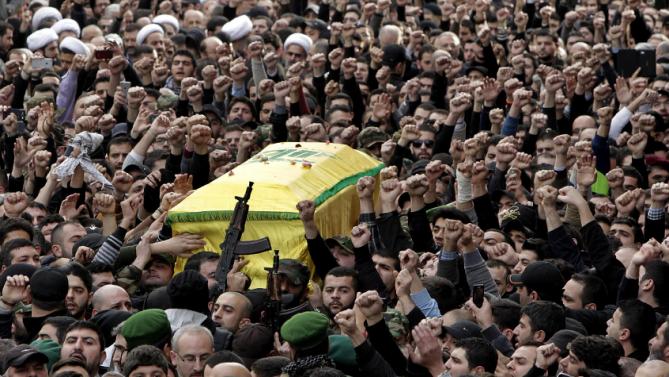 The funeral of Jihad Mughniyeh, killed Sunday in a Israeli raid in Golan (Photo AP)

Beirut, 22th of January 2015, Nena News – The most prominent sign of this concern was Israel’s attempt to deny that it had previous knowledge of the Iranian general’s presence in the targeted convoy, after the commander of the Iranian Revolutionary Guards threatened Israel with a “devastating storm” in response to the murder.

Writing in the Israeli newspaper Yediot Ahronot, military commentator Alex Fishman summed up the sentiment in Israel by saying that Israel regrets its success more than it should. He further elaborated that the Israeli attack has now turned into a strategic crisis, prompting the authorities to rush to deploy Iron Dome batteries in the north. He also wrote, without saying who was responsible for the assassination: “We can assume that the planners had not dreamt of a more glaring success. We hit three birds with two missiles: Breached Syrian sovereignty, hit a Hezbollah symbol, and assassinated an Iranian general.” The commentator also said that if Israel knew who and what it attacked in the Golan, “then we have a problem in strategic thinking [Translated quote].”

Fishman noted that not only Israel has remained silent, but all foreign ministers in the world, as well. He said that everyone is backing down and burying their heads in the sand, hoping the situation would blow over. In the event of a storm, he continued, the hope in Israel is that it would be short.

Israel is now searching for indications of how Hezbollah intends to respond to the attack. In regards to Iran’s disclosure of the identity of its martyrs, and the popular funerals held for Hezbollah’s martyrs, Fishman said these are signals to their respective home fronts and the world that “we intend to respond.” Yossi Yehoshua, a political commentator at the same newspaper, wrote that, despite being a resounding success for the attack, Iran’s announcement of the death of a Revolutionary Guard general increases risks for Israel.

Zvi Bar’el, Arab affairs commentator in Haaretz, however, wrote that the attack shatters the status quo, and drives Israel towards more intervention in the Syrian crisis — towards drawing new red lines. Bar’el added that various groups control parts of the Golan, including those affiliated with al-Qaeda, but that Israel does not view them as a threat. The involvement of Hezbollah forces and Iranian fighters, meanwhile, is considered a strategic shift that will be met with a violent Israeli response.

Amos Harel, a military analyst for Haaretz, said that even though no one was interested in escalating the situation, including both Israel and Hezbollah, the Iranian general’s death would make the situation more complicated. Harel wrote that this factor will be at the heart of the tension between Israel and Iran, not to speak of Hezbollah. Therefore, he said, the question is whether Tehran will choose to keep the anticipated response in the hands of Hezbollah.

Harel revealed what could be considered the motive behind Israel’s decision to target Hezbollah fighters, writing that Hezbollah was currently preoccupied with the fight against jihadist groups, which would restrict its movements against Israel. Harel cited Israeli military intelligence reports that said Hezbollah was not interested in an escalation, but he warned that similar assessments were being circulated on the eve of the Second Lebanon War in 2006. Harel predicted that Hezbollah would respond by hitting Israeli targets in foreign countries while maintaining deniability.

Harel suggested that the attack on Hezbollah, like many similar Israeli operations, was pursued despite warnings from officers within the Joint Chiefs of Staff about possible consequences. He added that Security Minister Moshe Ya’alon is strongly in favor of aggressive attacks of this kind, based on his experience in such operations, most notably in the elite Sayeret Matkal commando unit, which he led during the 1988 assassination of Palestinian leader Khalil al-Wazir (Abu Jihad) in Tunisia.

The military commentator analyzed the policy pursued by Israeli Prime Minister Benjamin Netanyahu in this context. He said that the official Israeli position was deliberately vague. On the one hand, it was not admitting responsibility for the attack in Golan; on the other hand, it endorsed it indirectly via Israel Hayom, which he described as a state mouthpiece, whose headline read: “Our forces attacked a cell of senior terrorists in the Syrian Golan.” Harel wrote that such duplicity allowed Netanyahu to simultaneously carry out an attack and distance himself from it.