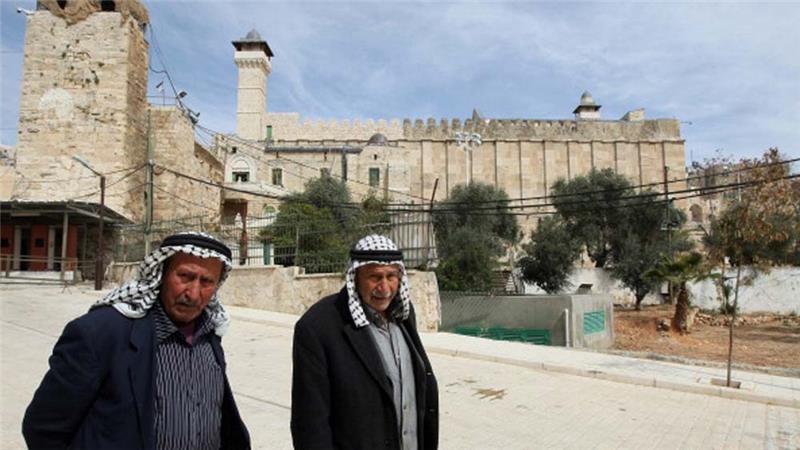 Following the massacre, the Ibrahimi Mosque was divided, with Muslim access to the holy site reduced [Getty Images]

Roma, 26 febbraio 2016, Nena News – Hebron, occupied West Bank – Kneeling at the back of the Ibrahimi Mosque, Hosni Issa al-Rajabeh called out to his son across the floor. “Go back a little. Right. That’s it. That’s exactly where I was praying,” he said, gesturing to the spot where his son Ayoub stood, a few metres in front of the pulpit. “And from there, I crawled forward to check on the imam.” Twenty-two years have passed since Israeli settler Baruch Goldstein murdered 29 Palestinians at this Hebron mosque, but Rajabeh can recall the events leading up to that deadly morning with precision.

In late February 1994, the Muslim holy month of Ramadan and the Jewish Purim holiday overlapped. There had been a disagreement at the Ibrahimi Mosque on Thursday evening, Rajabeh recalled, when a large crowd of Jews wanted to enter the mosque at the same time as Muslims were due to pray. There was no violence that night, but the mood was extremely tense.

“The next morning, I came for dawn prayer with my wife and children around 4:30am. When we arrived at the mosque, a settler greeted us and welcomed us into the mosque, which was very strange,” he told Al Jazeera. “Then, the women and young children were told by security that they should pray in a separate room away from the men. That was also strange”.

Rajabeh recalled entering the main room of the mosque and beginning the daily dawn ritual as usual. “The imam began to read the Sajdah verse. He read for four minutes, and when the first people kneeled down, I heard shooting and the power cut out. “At first, I thought it might be fireworks for the Jewish holiday, but after five seconds, the man next to me fell forward. I realised he had been shot; so had the person in front of me, and so had I,” Rajabeh said.

Goldstein was an American immigrant to Israel who was active in the extremist Kach political movement in the nearby Israeli settlement of Kiryat Arba, and he was known to Israeli intelligence. He was found and beaten to death by a crowd soon after the massacre. The Israeli government has maintained that Goldstein acted alone, but numerous eyewitnesses at the time reported seeing two or three attackers.

Like Rajabeh, Sharif Ghaith was in the mosque that morning and survived the massacre by a matter of centimetres. He was shot once in the face. The bullet entered his right cheek just above the mouth, and exited through his lower jaw.
Today, the scars are hidden by Sharif’s salt-and-pepper beard, but they remain, along with his psychological wounds.

“Every time it is Ramadan, I remember that morning. Every time I see injured people, I remember the morning. It is unforgettable,” Ghaith told Al Jazeera. “Every time I go to the mosque, I feel frustrated and depressed. Every time, I see the dead bodies and the injured, and I remember what happened to me. It’s worse because the Israeli soldiers do not always allow me into the mosque. They know me and that I survived the massacre, and have denied me entry on many occasions.”

Following the massacre, the Israeli government imposed a series of security measures across occupied Hebron. The Ibrahimi Mosque itself was divided, with Muslim access reduced from the entire space to around 40 percent of the site. The other 60 percent was allocated to Jewish worshippers, who accessed the site from a separate entrance.

Parts of the city close to Israeli settlements were closed off to Palestinian residents, including the economic centre of Shuhada Street. Checkpoints were set up around the entrance to the mosque, manned by Israeli soldiers. Hefthi Yassin Abu Sneina works for the Palestinian Waqf, and is the current head of security at the Ibrahimi Mosque. While the Waqf is officially in charge of security of the holy site, he said that the military effectively took over after the massacre.

“Israel makes our work extremely challenging,” Abu Sneina told Al Jazeera. “At the checkpoint outside the mosque, the army is terrifying people every day and stopping people from entering the mosque. “They even prevent the mosque staff from coming to work sometimes. It is very common for our employees to be delayed. We have these special ID cards which are supposed to prevent this from happening, but they don’t respect it and still harass us.”

While complaints of harassment and mistreatment at checkpoints have become common in Hebron over the past two decades, the division of the mosque was the most difficult outcome for Rajabeh.

“It was so painful to come back here after what happened and see that they had taken away two-thirds of the mosque. It was an injustice. Instead of offering a hand to those who were killed and injured, the Israelis gave the settlers more space and access to the mosque. It was as if they were rewarding the murderers”. Nena News