The Palestinian prisoners’ hunger strike may yet overcome the Palestinians’ internal differences and spark a new revolt against Israeli occupation, says ‘Urayb ar-Rintawi 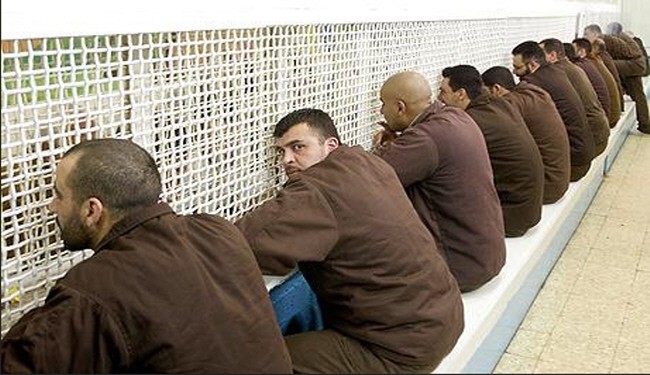 The contagion of inter-Palestinian splits has now been passed on to the patriotic movement inside Israeli prisons. Fatah’s internal disagreements have kept more than half its prisoners outside the strike declared and led by imprisoned leader Marwan al-Barghouti. And the Fatah/Hamas conflict has prevented Hamas’ prisoners from participating by way of punishing Fatah and the PA for what Hamas refers to as the PA’s ‘punitive measures’ against the Gaza Strip, and based on the pretext that Barghouti took the decision unilaterally. The remaining factions have left the matter to their prisoners to decide on an individual basis with an apparent eagerness on the part of the PFLP’s prisoners to take part.

The fact of the matter is that the patriotic movement inside Israeli prisons has never been immune to the inter-Palestinian disagreements and splits, even if its leaders have consistently exerted intensive efforts to contain these disagreements and keep them outside the bounds of Israeli prisons. The patriotic movement also played a role from inside the prisons and behind bars in formulating the 2006 national reconciliation document, which was adopted by the various factions as one of the terms of reference for inter-Palestinian dialogue and reconciliation, and as a founding document for national unity.

The prison movement has not lost its glitter and influence despite these splits. The open-ended strike inaugurated by the prisoners coincided with Palestinian Prisoner’s Day. This set off a new wave of popular resistance to the occupation in solidarity with the prisoners and their cause. The persistence of this strike, which is now ten days old, is most likely to escalate the level of popular confrontation with the occupation and the settlers. It will also accelerate the pace of stabbings and car-ramming attacks, which have turned into an easily accessible tool in the hands of all those seeking revenge against the occupation, and every fighter who seeks to get rid of its pollution (and even a means of resolving marriage conflicts, as Israel claims).

A little less than a quarter of all [approx. 6,000] Palestinian prisoners and detainees are now taking part in the strike, while reports say that additional prisons, factions, and prisoners will join in the coming days. If it continues and holds its ground, the strike will launch a vast force that attracts new prisoners to its ranks, and will drive thousands of Palestinians to the streets and public squares in solidarity with the prisoners and in support of their cause, which is at the heart of the cause of Palestinian national liberation.

The strike’s repercussions and consequences have already begun to reverberate in the Palestinian Diaspora and among the forces friendly to and allied with Palestine’s people, as well as with boycott activists. And this solidarity is gaining pace, while the prisoners’ cause is assuming a worrisome international dimension that is expected to grow and redouble in the coming days. Meanwhile, the occupation’s Zionist propaganda stands unable to promote its narrative of the prisoners as criminals, murderers, and terrorists.

In confronting Netanyahu’s attempts (that have been adopted by [U.S. President Trump’s Chief Middle East Negotiator] Jason Greenblatt) to criminalize and demonize the prisoners and describe them as terrorists, the freedom-fighters behind the bars have imposed their own special pace on the PA, and the Palestinian leadership, factions, and people.

They have once again proven that their status among their people is almost ‘sacred,’ and that all attempts to demonize them and to stop the salaries paid to their families, as well as the attempt to portray their defense as an incitement to terrorism, are destined to meet resounding failure, no matter how much pressure the racist [Israeli] troika’s government may exert and regardless what positions the Trump administration – the most biased in Israel’s favor – may assume.

In light of all this, it is not unlikely that if it expands and is joined by others, the prison revolution will set off a popular uprising outside prisons. For the truth is that all the reasons that may drive the Palestinians to rebel and rise up are there and are simmering under the surface. Israel’s prisons may therefore provide the spark that will light the fire.

I hope that the factions’ leaders and the PA, and especially the two sides to the inter-Palestinian split [Hamas and Fatah], will decide to calm their conflict and declare a media and political ceasefire, at least throughout the strike. I hope they can all agree to set their disagreements aside, and work under the banner of ‘let us unite on the battlefield’ that the Palestinians have developed in a creative manner in previous intifadas and strikes.

And the ‘battlefield’ here is not confined to the prisons but includes the public squares and arenas, as well as the points of contact with Israel’s settlements and checkpoints. For this is not the time for settling scores or punishing anyone, or for declaring any party or province to be mutinous and an outlaw [as PA President ‘Abbas has allegedly been considering as regards Hamas/Gaza]. The time now is for backing the strike and bolstering the strikers.

“The time now is for echoing their resounding cry along the various lines of contact with the occupation and with the settlements,” concludes Rintawi.