Never mind Israel, it’s time to show the red card to the PA

The failure of the PA to seek the suspension of Israel from FIFA has nothing to do with Israel’s “international effort”. It was all about the spinelessness of the Palestinian Authority and its utter dependency on Israeli and Western largesse. Rajoub’s farcical performance in Zurich confirms that the Ramallah authority cannot be trusted, Daud Abdullah writes. 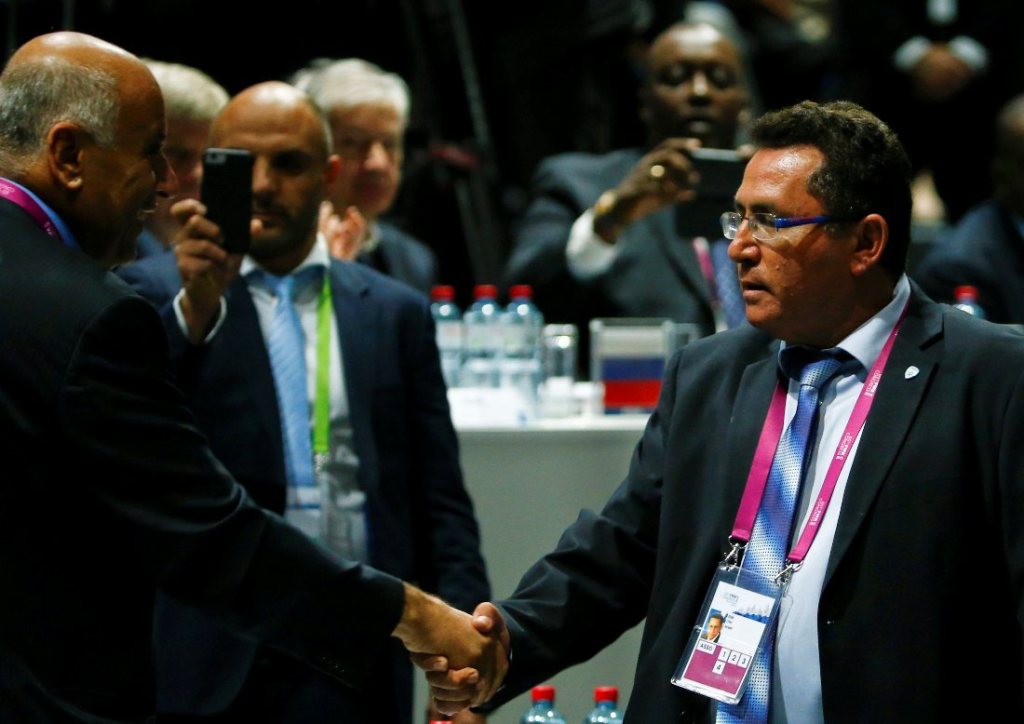 For many observers, the fact that Sepp Blatter was re-elected as president of FIFA came as no surprise. As expected, he was determined to stay in office despite the arrests and corruption charges this week. That Israel, unlike the European countries, supported Blatter’s candidacy is also not surprising; it is a state whose own political leaders have been tainted by corruption charges over the years.

The most shocking news from the FIFA congress in Zurich was actually the decision by Palestinian Football Association chief Jibril Rajoub to withdraw the resolution for a vote to suspend Israel from world football’s governing body. Although the Palestinian Authority (PA) is notorious for its wanton squandering of international goodwill, this latest example is arguably the worst of all. It was a golden opportunity to take the international boycott of apartheid Israel to a new level. Rajoub’s claim that he was pressured by African and Asian countries is a lame and shameless excuse. His past history as head of the PA’s preventive security agency and thus a willing collaborator with Israel on security issues demonstrates clearly where his loyalties lie on such matters.

While much of what goes on at FIFA is often shrouded in secrecy, the universal support for the Palestinian case among the member federations was well known. If anyone doubts the level of international support that was there for the taking, just consider how petrified Israeli officials became in the days leading up to the Zurich meeting.

Israeli President Reuven Rivlin described the imminent suspension from FIFA and popular calls for a cultural boycott as a “strategic threat” to his country. Prime Minister Benjamin Netanyahu issued the now customary volley of threats to the PA, to Jibril Rajoub (he claims) and FIFA itself. To his credit, the Israeli leader did, at least, stand up to protect his country’s interests, which is more than can be said for the Palestinian leadership. Yet again, the PA proved that it desperately lacks the political will to do the same.

If nothing else, Rajoub’s farcical performance in Zurich confirms that the Ramallah authority cannot be trusted. It has now made it standard practice to betray the collective will and expectations of the Palestinian people. In 2008, for example, the PA obstructed the passage of a UN resolution proposed by the State of Qatar calling for an end to the blockade of the Gaza Strip. The following year, it abandoned a resolution for the Human Rights Council to forward Judge Richard Goldstone’s report on war crimes in Gaza to the UN Security Council. The PA has thus acquired a unique record of putting Israel’s interests before that of the Palestinians.

In a bizarre and theatrical manner, Rajoub took to the stage in Zurich carrying a red card – which he obviously had no intention of using – to announce that he was withdrawing the resolution because he was aware of the harm it would bring to Israel. His words amounted to an apology to the Israelis, as if their suspension from FIFA or a sporting boycott of the apartheid state was a crime.

Gideon Levy, the Israeli columnist for Haaretz newspaper, would have made a better representative for the Palestinians than Rajoub. “A soccer ban doesn’t kill anyone,” he wrote. “A boycott spills no blood. It is a legitimate weapon to establish justice and apply international law.”

That said, there are others, including Rajoub, who claim that politics should be kept out of sports. Of course, they would say that wouldn’t they, especially when it suits their interests to do so. But didn’t the US lead an international boycott of the 1980 summer Olympics in Moscow after the former Soviet Union invaded Afghanistan? Didn’t the Thatcher government in Britain as well as France and Australia support the boycott, leaving the decision about whether or not to compete to individual athletes? Similarly today, it is up to every individual citizen of the world to take a stand on Israeli apartheid. To advocate anything else would be sheer hypocrisy.

Whatever disappointment and outrage Palestinians and the thousands of people who had been campaigning vigorously for the ban may feel after Zurich, all is not lost. This latest encounter with apartheid Israel has placed the nuclear option of a sporting and cultural boycott of the rogue state well within the reach of the masses. They do not have to wait for the approval of FIFA or even the Palestinian Authority to set it in motion.

In retrospect, the failure of the PA to seek the suspension of Israel from FIFA has nothing to do with Israel’s “international effort” as Netanyahu claimed triumphantly. It was all about the spinelessness of the Palestinian Authority and its utter dependency on Israeli and Western largesse. Forget about showing Israel the red card; it is high time for the PA to be sent for an early bath for its repeated failures to represent the people of Palestine and defend their national interests.