Who will be Talabani’s successor in Iraq?

Iraqi Kurds face uncertainty over presidency as Iraqi President’s term is at its end. Whether they keep the post after this week’s parliamentary elections is an issue that could deepen the disconnect between Baghdad and the three-province Kurdish region, which are at odds over a string of long-running disputes 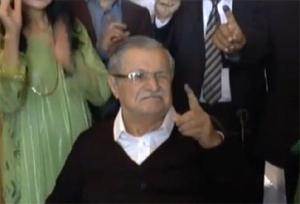 SULAIMANIYAH, Iraq – Iraqi Kurds face uncertainty over whether they will retain the presidency, an important symbol after decades of central government oppression and a link between their autonomous region and Baghdad.

Whether they keep the post after this week’s parliamentary elections is an issue that could deepen the disconnect between Baghdad and the three-province Kurdish region, which are at odds over a string of long-running disputes.

President Jalal Talabani, a revered figure for many Kurds, has held the post since 2006, helping to mediate conflicts between Iraq’s religious and ethnic groups.

But he has been abroad for medical treatment for more than a year, and his final term is at its end, leaving the question of his successor in doubt.

For Qubad Talabani, a senior Kurdish official and one of the outgoing president’s sons, having a Kurd as president is a “step in recreating an Iraq that is for everybody.”

While the presidency is largely ceremonial, having a Kurd as head of state is important to many Kurds after years of government oppression that saw tens of thousands of Kurds killed by now-executed dictator Saddam Hussein’s regime, including in infamous chemical weapons attacks such as Halabja.

“It means everything to me,” Aram Abdulkarim, a 29-year-old member of the Kurdish peshmerga security forces dressed in civilian clothes, said at a school in Sulaimaniyah serving as a voting centre.

“For years, the president has been Arab and we have been oppressed,” he said.

Wahid Hamedamin, an ageing man wearing traditional Kurdish clothing who walked with the aid of a cane, agreed.

“I don’t care who the president is, as long as they are Kurdish,” said Hamedamin, speaking at another Sulaimaniyah polling centre.

He explained that an area where he lived was one of those targeted with chemical weapons, killing dozens.

There are three top posts in Iraq’s federal government, and under a de facto agreement the prime minister is typically a Shiite Arab, the president a Kurd and the speaker of parliament a Sunni Arab.

The new premier is all but guaranteed to be drawn from Iraq’s Shiite majority again, but who will fill the other two positions is still undecided, with a Sunni Arab or a Kurd potential options for both.

Kirk Sowell, an Amman-based political risk analyst and the publisher of Inside Iraqi Politics, said the division of the top posts “will not be an all-in negotiating process,” and instead will stem from who becomes the next prime minister.

Some Kurds say that obtaining one of the top three government posts is more important than holding the presidency specifically, and that they would be open to a Kurd taking the post of parliament speaker instead.

“It is very important for us that one… should go to the Kurds,” said Aram Shekh Muhammed, a parliamentary candidate from the Kurdish Goran movement and the head of its election office.

Michael Knights, a fellow at the Washington Institute for Near East Policy, said “there is still a sense that a Kurd must either be president or speaker.

“If the Kurds got neither, that would be a major upset and signal the Arabs were falling into old anti-Kurdish habits.”

If that were the case, it would add to already numerous disputes between the two sides, which are at odds over natural resources, territory, power-sharing, and federal payments to the Kurdish region that politicians say have been delayed and insufficient this year, causing salaries to go unpaid.

For the Kurds, the presidency still holds a special allure, Knights said.

And Asos Hardi, a Sulaimaniyah-based journalist and analyst said that it “makes the people here in Kurdistan feel that something is connecting them with Iraq.” Nena News