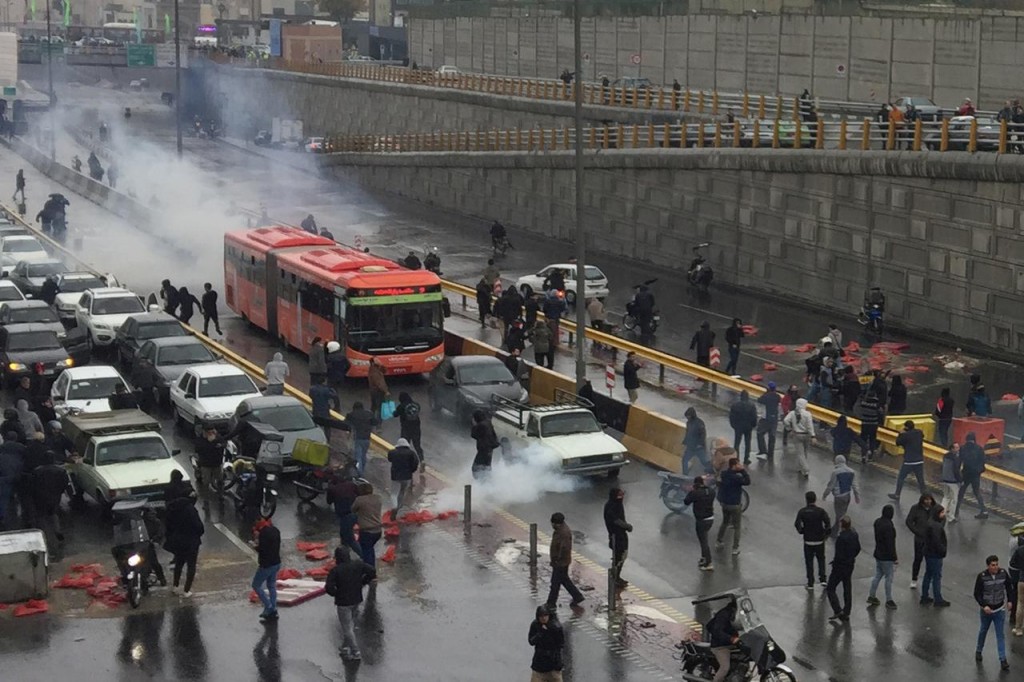 1) The protests in Iran about gasoline prices turned rapidly political. How can the protesters be characterized socially and politically?

Gasoline prices were just the spark that reignited the protests in Iran, as there were more important issues like political, civil and personal freedoms. As there are protests in the neighboring countries now, the Iranians are following them and reacting to them on social media. The Iranian people have endured four decades of oppression, and they went on protest against the regime last winter. Many huge protests took place within the span of last few years, and they weren’t just about gasoline prices or food. The main reason for the protests in Iran is the regime’s behavior. It squanders the oil’s money on its proxy forces in other countries like Iraq, Lebanon and the Palestinian Territories, and the Iranian people are extremely upset about this.

2) How can the social politics of Iran in the last 10 years be described? Did social programs expand? What kind of programs?

The Supreme Leader of Iran wants to compete on with the great powers on the issue of demographics. As for the social and basic services, many border provinces like Sistan and Baluchestan and Kurdistan are totally deprived. Even Khuzestan that is rich in oil is poor. Many Iranian cities lack good drinking water, with increasing desertification and dust covering cities for long periods being one of the biggest issues that the people are suffering from. As for women, they are stripped of all their fundamental rights. The regime propaganda is strong and deceiving, but in reality women in Iran are suffering from abuse and inequality in inheritance laws and employment opportunities, and they are prohibited from traveling without a male guardian in company. Even divorce is more like a man’s exclusive right, as women can’t ask for a divorce. The regime claims they are applying Islamic rules and teachings, but did Islam ever prohibit women from riding bikes?

3) How did the Iranian government/regime react to the US-embargo? What kind of “story telling” did the regime adopt?

The regime has formed special units to smuggle oil through Iranian mafias that have connections with regional and international mafias. And those mafias are close to the regime’s members and could even be the sons of Iranian officials. For example, Babak Zanjani who succeeded in smuggling oil through regional contacts was a personal driver for a former minister. He is now imprisoned and sentenced to death on charges of corruption, withholding government money and harming the economy. There are many corrupt officials that are protected by government officials. As for the US sanctions, the regime’s story that they keep repeating is that the nuclear program is intended for good purposes, and that the program is peaceful and used only to generate electricity. And that the “imperialist” nations don’t like our progress. The strange thing is the regime doesn’t care to explain why they don’t rely on other sources of energy like solar or wind energy that are easier to obtain, cost less and has less risks, and more importantly, other countries wouldn’t care if they used it, unlike the nuclear energy. The regime doesn’t even care to explain to its people why they have to suffer and pay the price of the conflict between the regime and the great powers; the conflict that has been created by the aspirations of the regime’s leaders.

4) Iran, like Iraq, seems to be a “scene/field” where the opposite imperialist interests are having their fight trying to use the popular uprising. How do the protesters react on that?

Yes, I agree with you, Iran is like Iraq in that many countries want to control its resources, and that’s been going on since the beginning of time. Most countries want to take advantage of other countries by interfering in their internal affairs, but does that mean the protests were supported by other countries? I don’t think so. They are 100% civilian protests in both Iraq and Iran. And if there’s some entity trying to take advantage of them, then that’s another argument. Didn’t the Iranian regime meddle in the Syrian conflict? Didn’t the regime interfere in Lebanon? Isn’t the regime still interfering in Iraq? The Iranian regime even meddled in Nigeria and had issues with the Nigerian government because of the militia led by Ibrahim Zakzaky. The Iranian regime has a long history of interfering in other countries’ conflicts. They even interfered in the Balkans’ War of the 1990s in favor of the Muslim Bosnians. The Iraqi people are upset with the Iranian regime’s sending General Soleimani every now and then to meet with Iraqi Shia party leaders who are allies of Tehran. And he is here again today, giving advice on selecting a new prime minister in Iraq. As for your inquiry about the foreign interference in the Iranian protests, it’s enough to say that the people want to get rid of oppression and take down the regime that has deprived them of basic life necessities, and I think they know how to stop whoever that thinks they can interfere in their protests.

5) The protests in Iran finished after 10 days. But how is the social conflict going on? Are there some workers or students protests?

Here I have to disagree. The protests in Iran never ended. Even though the regime has pacified the protests in larger cities, smaller cities are still protesting. And in the final analysis, the protests are like amber under ashes, and they are likely to set the whole nation aflame again. But you won’t hear about these protests in the news due to continuous internet ban in the small cities. And as for the other part of your question, in the previous protests that were led by intellectuals and students, the middle class didn’t care much. But everyone participated in the recent protests, even in the rich neighborhoods of northern Tehran, and we saw the workers, retailers and students taking part in this movement. Previously, there were workers’ protests demanding higher salaries, but many of these protesters were arrested, tortured and charged with conspiracy against the regime, and as I said the middle class didn’t take part in these protests. But in the recent protests almost all the various sectors of society participated. However, the regime used excessive force to suppress the protests.

In the end, I want to add one important point: in most third-world countries, the multinational corporations are looting these countries resources. But in Iraq and Iran, it’s oddly different, as these two countries’ resources are being looted by their own rulers. It’s true that the regime has granted rights for oil exploration, tariffing, fishing and other advantages to the Russians and the Chinese, but there’s an inside deep state in Iran that is composed of the Revolutionary Guards and some other factions. This deep state has taken over the economy and is monopolizing all the development and construction projects. In the case of Iraq, the entire state is run by the militias of the parties that are allied to the Iranian regime. And as there is almost zero production in the country, those militias are strictly controlling imports through their clients and contacts. This applies to selling oil, too. But unfortunately, oil money isn’t used to rebuild the country. It is spent on buying weapons and funding the militias that belong to the powerful parties in the government in order to advance the regional interests of the Iranian regime. Nena News