US-made cluster bombs kill civilians in Yemen – but who answers for it?

Amid Saudi bombing campaign, civil society must make use of US domestic law and international norms to seek a ban on cluster bombs 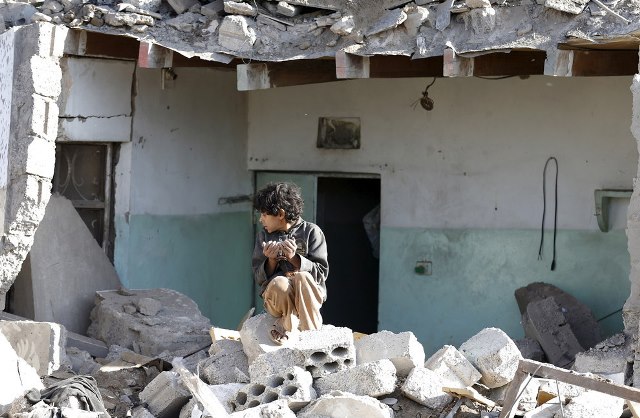 16th of January 2016, Nena News – Human Rights Watch recently reported that further evidence on the use of cluster bombs had been uncovered on Al Zira’a Street in the Yemeni capital Sanaa. Residents found pockmarks from the tiny bomblets released from these deadly devices along the street in homes, on their vehicles and even at the local kindergarten.

The bomb in question, which was dropped by the Saudi-led coalition in their campaign of air raids, recovered in the area revealed markings that lead it back to a US factory in Tennessee . The facts above are damning but for the complexities and futility of international law, most likely no one will be called to account.

Cluster munitions are bad weapons. Air raids in themselves are highly condemnable for the probable damage to infrastructure and civilian harm they cause, particularly in populated areas. However, these are not just single explosives – cluster bombs release many smaller submunitions – the one found on Al Zira’a Street possibly released up to 650 submunitions – which have the effect of hitting ground objects such as vehicles and people. They are also impossible to direct.

Since the Saudi-led coalition started its offensive in Yemen, the use of cluster bombs has been documented via air raids and its path has led back to the US. The Convention on Cluster Munitions, an international treaty joined by 118 states, bans the use of cluster munitions in armed conflict but the US and Saudi Arabia are not signatories.

However, according to US domestic law, the Cluster Munitions Civilian Protection Act 2011 limits the use and transfer of cluster munitions to those that have less than a one per cent failure rate, and prohibits their use in civilian areas. It also requires a clean-up plan if US cluster munitions are used as undetonated munitions – which essentially act as landmines.

The markings on the bomb found in Sanaa indicate it was manufactured in 1978, prior to efforts made by the US to increase the reliability of their manufactured stockpile. Also, although the target in this case was military, it was used around a populated area in direct contravention of US policy as well as the international law of armed conflict. Article 51(1)(b) of the Additional Protocol to Geneva Convention I states that an unlawful act that is indiscriminate in nature is one that cannot be specifically directed to a military target and cluster bombs, by their nature, in populated areas will affect non-military objects.

The US’s liability is evident on two grounds. Firstly, it is a party to the conflict by providing intelligence and it is providing arms to a state that is potentially responsible for grave human rights abuses. Since the start of the conflict, Saudi Arabia’s air strikes have caused widespread civilian casualties that have ignited calls for a UN inquiry. Secondly, the US is providing arms as a so-called “legal” transfer to a state that is liable for human rights abuses.

However, without any planes in the air or boots on the ground, will the legal apparatus in place bring the US to account? The International Law Commission has been clear on this and has deemed a state responsible for a wrongful act by aiding another state in that act when they know the circumstances of that act. They have had no problem in applying this to state arms transfers and this rationale has been transferred to the Arms Trade Treaty of which the US is a party and signatory.

Notwithstanding international law, the US is contravening its own domestic law. The Foreign Assistance Act of 1961 and its amendment include section 620M states:

“No assistance shall be furnished … to any unit of the security forces of a foreign country if the Secretary of State has credible information that such unit has committed a gross violation of human rights.”

The precedent of indicting third parties is weak. One example perhaps provides some glimmer of hope in that prosecutions have happened in the case of Charles Taylor, who was indicted by the Sierra Leone Special Court (SCSL) after providing weapons to rebels during Sierra Leone’s civil war, where war crimes had been committed by the rebel, Revolutionary United Front. It is, at the least, an example of where criminal responsibility can be exacted for providing material support to perpetrators of human rights abuses.

When there are internationally binding treaties and conventions as well as national legislation, the foundation is there to compel the US to halt sales or face repercussions.

However, strong precedent shows that neither will happen. The US is one of the permanent members of the Security Council that will veto all major decisions relating to a UN investigation, which is necessary to establish whether human rights abuses have taken place, despite there being prima facie evidence of such crimes. Saudi Arabia is also chairing the Human Rights Council, which has already stalled efforts to launch an investigation.

When the US is one of the largest exporters of arms and Saudi Arabia is of one its largest importers, there will be a strong counter operation against advocacy efforts in establishing any inquiry, which would almost inevitably harm the longstanding bi-lateral relationship with Saudi Arabia.

As far as domestic law goes, section 620M of the Foreign Assistance Act shows no advancement in being invoked in arms deals where human rights considerations should have been to the fore. Arms deals to both Israel and Colombia, in instances where evidence existed of human rights abuses on the part of both militaries, continued with no repercussions.

The problem does not appear to be the law. Rather, it’s the mechanism by which these laws are enforced. What is required is the ongoing cry of civil society to demand action on cluster weapons. This could expose congressional shortcomings, outdated UN practices and put pressure for more states, including the US, to ban cluster munitions completely just as it succeeded to do in its global campaign to ban landmines.

Sophia Akram is a researcher and communications professional with a special interest in human rights particularly across the Middle East and Asia.