If the discourse is changed and the question of Palestine was redefined and historical accuracy re-established, BDS would in fact be seen by everyone as a legitimate, non-violent tool to challenge an apartheid system that discriminates against the Palestinians, who are in fact fighting for their basic rights 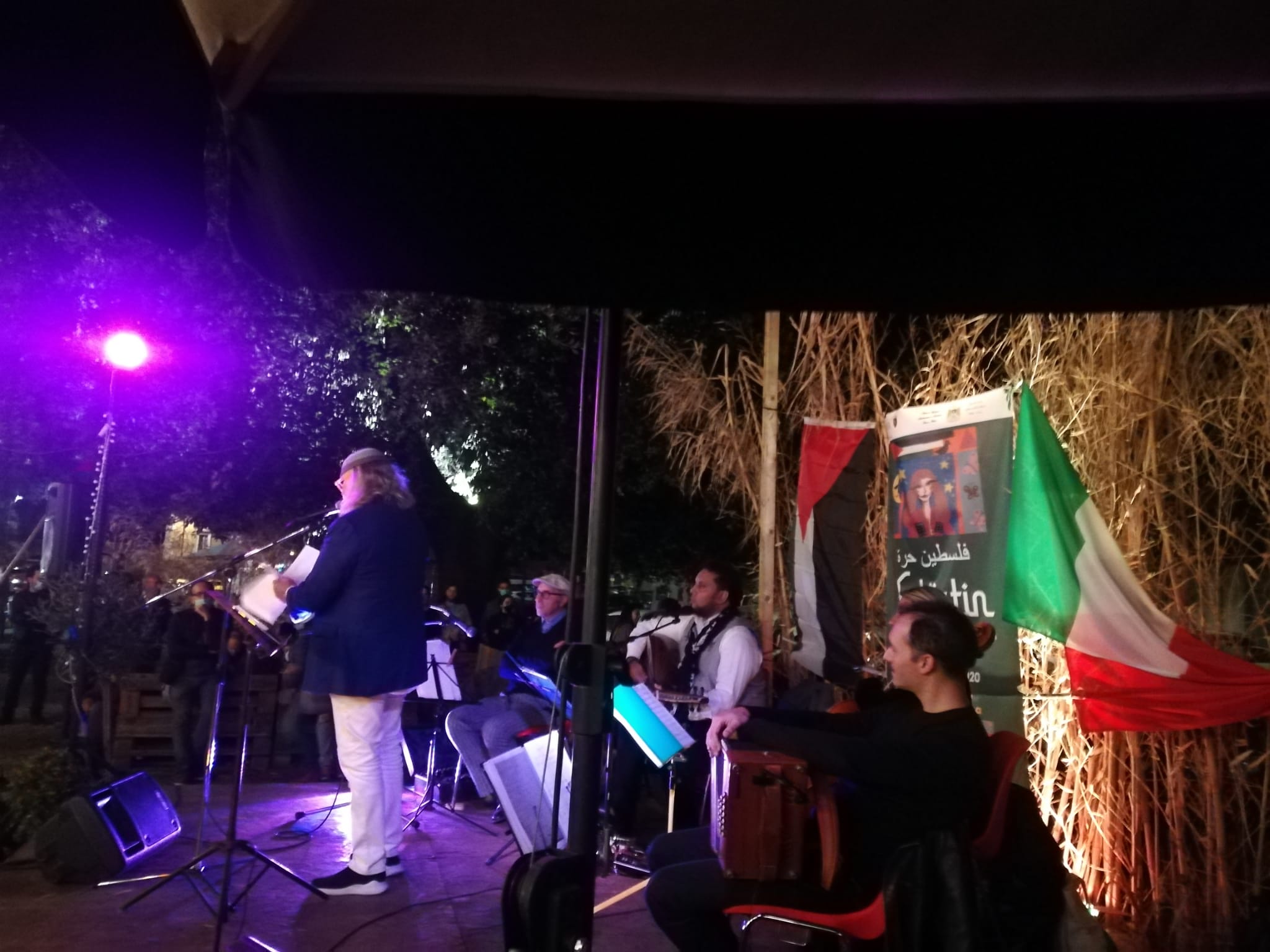 Roma, 9 ottobre 2020, Nena News – The first Palestinian cultural festival “Falastin” took place in Rome, Italy, from the 1-4 October and was an overwhelming success. The festival demonstrated that there is strong support in Italy for the plight of Palestinians, along with a profound and sincere interest in discovering the various aspects of Palestinian culture.

The program included a variety of guests ranging from journalists such as Tommaso Di Francesco, Alberto Negri and Michele Esposito, as well as the well-known Algerian journalist Nacera Benali; and politicians like Stefano Fassina, Pino Cabras and the former Vice President of the European Parliament Luisa Morgantini, who is a longtime supporter of Palestinian rights and founder of one of the most well-established associations in Italy working on Palestinian issues, Assopace. The festival hosted high-caliber guests such as best-selling author Suad Amiry and world-renowned Palestinian fashion designer Jamal Taslaq, and the most outspoken and respected Italian Jewish defender of Palestinian rights, Moni Ovadia, who is a playwright, actor, author, and musician.

After a first day dedicated to Palestinian youth and activism, and a second day themed Palestine, Italy and Europe, the third focused on some of the key issues pertaining to the Palestinian question such as the role of media; the status of Jerusalem; and the right of return, and included the presence of the highly respected attorney Michela Arricale, member of Democratic Jurists who recently won a case against the Italian state television RAI for incorrectly stating that Jerusalem was the capital of Israel during a quiz show called l‘eredità.

The fourth and final day was the most extraordinary, whose theme revolved around “the courage of women”, and saw world-renowned author Suad Amiry being interviewed by a young Palestinian activist, Dalia Ismail, on Amiry’s most recent novel The Story of an English Suit and a Jewish Cow (published in Italy by Mondadori). Following the book presentation, fashion designer Jamal Taslaq was interviewed by Rania Hammad, while the Palestinian Mariam Hassan graciously modeled an evening dress by Taslaq, which included intricate Palestinian embroidery. Alessandra Mecozzi from Cultura’ e Liberta’ – an Italian association that promotes Palestinian culture – moderated the final debate of the festival by engaging with exceptional women such as Vania Bagni, vice president of ANPI (the Italian National Association of Partisans); Miryam Marino, member of Jews against the occupation; and Naheda Slayih,who spoke about Palestinian citizens of Israel (or Arab-Israelis) and discrimination. 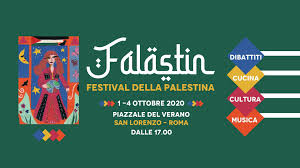 However, the festival did not take place without some controversy. The organizers of the event, the Association of the Palestinian community of Rome and Lazio, was the target of an inflammatory campaign that labeled the festival as dangerous, violent and antisemitic, and that promoted hate and terrorism while also featuring undesired guests. This campaign required that the Palestinian community and the various Italian associations involved in the festival focus on rebuking the unjustified attacks coming from various entities: including the Comunita’ Ebraica di Roma (the Jewish Community in Rome), the Israeli embassy and the Wiesenthal Centre, who’s director Shimon Samuels even wrote a letter to the Italian Prime Minister, Giuseppe Conte, asking him to shut down the festival.

The attacks were so intense that they even caused a crisis inside the Democratic Party, primarily targeted against the President of the municipality that gave its patronage to the event, Francesca Del Bello. She was victim of an unjust campaign to discredit her, with the intention of forcing her to cancel the event altogether.

The Italian political party Italia Viva, headed by Matteo Renzi, also sided with the Jewish community against Del Bello. The politician of the Lega, Paolo Formentini, even declared that the Boycott Divestment and Sanctions (BDS) movement – present at the event, with well-known expert Stephanie Westbrook and young Palestinian activist Anwar Odeh of Progetto Palestina – has links to terrorist movements like the Hamas government in Gaza and the Al Fatah party in the West Bank, headed by the Palestinian President Mahmoud Abbas. These of course are unfounded and defamatory accusations. Formentini also declared that the BDS movement legitimizes hate towards the Jewish state and uses antisemitic propaganda, comparable to Nazism. These extremely dangerous and defamatory accusations were met with a strong and united response by the Palestinian community, their supporters, and several key individuals who supported the festival: Moni Ovadia, the playwright, actor, author, and musician, and the President of the Municipality, Francesca Del Bello, who were both very courageous in their support. 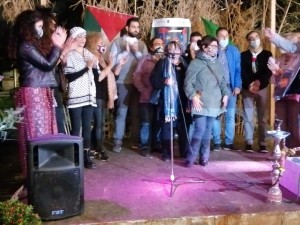 The President of the Municipality, Francesca Del Bello, at the Festival “Falastin” (Foto: Rania Hammad)

The festival organizers responded to the accusations by explaining the main objectives of the festival, which was to showcase the cultural richness of the Palestinian people through music, film, book presentations and art, as well as informative debates by leading Italian and Palestinian experts, journalists and intellectuals on issues related to Palestine. These debates included a segment with the participation of the BDS movement.

The organizers explained that the BDS movement is an international anti-racist, non-violent movement that was launched by Palestinian civil society and is a campaign to apply pressure to Israel in order to end its human rights violations against Palestinians.

The movement has indeed become stronger and more visible over the years, likely due to the continued failure of ‘peace processes’ over the past 25 years. Moreover, many notable figures such as Angela Davis and Desmond Tutu, and movements like Black Lives Matter support the BDS. There are also Nobel Peace Prize and Oscar winners, churches, unions, universities, associations, Jewish and Israeli organizations around the world that support BDS.

The BDS movement has been recognized as a legitimate form of freedom of speech and association, as recently confirmed by the European Court of Justice and Amnesty International that consider BDS supporters to be defenders of human rights. However, as long as the BDS is not framed and communicated correctly and coherently, and as long as the language that continues to define the Palestinian-Israeli conflict as a conflict between two equal parties – and not as an anti-colonial struggle – the problem will remain, manifested as a power struggle and a war for the ‘truth’. We must recognize there is a problem with the use of the term conflict when applied to Palestine; language should be framed in such a way to capture that violence associated with colonization can be met with the right of resistance by the colonized. 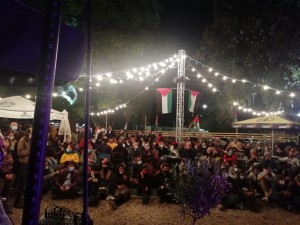 Emphasizing conflict over the root cause of the issue – colonialism – diverts attention from the reality of the situation and gives strength to those in power and their control over the prevailing narrative, while denying justice to the Palestinians. Defining the struggle as a conflict frames the issues in an inaccurate, inappropriate way, and allows the more powerful party to control the narrative in politics, diplomacy or in a peace process, while demonizing the Palestinians for their very basic right to resist occupation, colonialism and apartheid.

If the discourse is changed and the question of Palestine was redefined and historical accuracy re-established – in particular that Israel is in fact a settler colonial state – then the correct framing of any Palestinian resistance to the facts being created on the ground would not be conflict, but rather anti-colonial struggle. When viewed through this lense, BDS would in fact be seen by everyone as a legitimate, non-violent tool to challenge an apartheid system that discriminates against the Palestinians, who are in fact fighting for their basic human rights. Nena News