The discourse is clear – unemployment is the responsibility of the unemployed, who are lazy and irresponsible – and falls into the trap of classical economic liberalism that leaves no space for all the non-economic complexities of reality 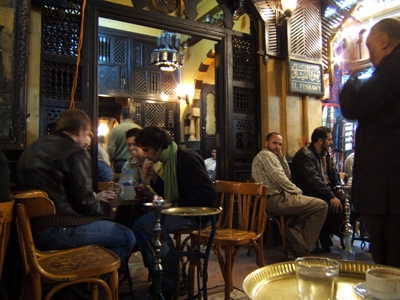 Il Cairo, 15th of April 2016, Nena News – I watch the TV program “Hona al-Asema” (Here’s the Capital), which airs on the privately owned CBC and is hosted by anchor Lamis al-Hadidy, on a regular basis. Not only because it offers a more professional level of analysis of the government’s economic policies than most other TV programs, but also because Hadidy — compared to other figures in both state-owned and privately owned media outlets in Egypt — is particularly representative of the economic views of the local capitalist class.

What she says can be considered more than just the personal opinion of a TV presenter or economic commentator, and we should engage with it as a discourse that is active in shaping public opinion, as well as representative of the economically conservative front, or what could be described as the “Egyptian right wing” (in the economic, social, and political sense).

A few days ago, Hadidy raised the issue of increasing unemployment in Egypt, especially among educated youth. She reproachfully addressed “those youngsters,” arguing that they have no excuse to loiter at cafés while waiting for jobs that appeal to them, and continue relying on pocket money from their parents in the meantime. Her remarks — which more than just a simple expression of distress — presented the issue as one of poor choices made individually by young people, choices that were creating social and economic problems for the state. The discourse was clear, simple and direct: unemployment was the responsibility of the unemployed, who are lazy and irresponsible and prefer to sit in cafés and hang out on the streets. She portrayed the youth as parasitic, due to their continuous financial dependence on their families, despite being at an employable age. And, perhaps they’re also somewhat greedy, waiting for jobs that they consider worthy.

Victim blaming the is, of course, a fundamental tenet of any right-wing discourse, the premise and purpose of which is to justify the social and economic status quo, defending the way it functions by placing responsibility for the issue on the victim or the marginalized. It’s a recurrent discourse that has a myriad of manifestations, starting with the claim that the ignorance and erroneous ideas of the poor are to blame for the misery of their condition, to stigmatizing those who die from torture as “thugs,” right down to crudely classist discourse that perceives poverty or misery as an inescapable genetic or cultural inheritance.

Right-wing social discourse is apologetic in its justification of the existing social system. It fulfills its function by personalizing the causes of any problem, believing that the solution for unemployment is providing the youth with computer courses, human development programs and yoga classes.

It is not unusual in Egypt to hear the elite blaming unemployment on the idea that the youth, or Egyptians in general, “don’t want to work.” What these arguments ignore — and are perhaps ignorant of — are economic and sociological studies of unemployment, which see the issue as more than just a cultural specificity of a nation or a social group, or as simply stemming from unwise choices collectively made by all jobless people.

Countries in the Middle East and North Africa have the highest unemployment rates in the world, up to 26 percent among youth, according to estimates by the United Nations Development Program in 2012 — almost double the global average. The consensus in statistical and economic studies is that such high rates are caused by structural factors that transcend personal characteristics, intellectual values or the moral decline of the unemployed, and that these structural factors fall on the side of job supply. The underlying cause here is that most of the region’s economies, including Egypt’s, are not developing at a sufficiently high rate to create enough jobs to absorb new entrants into the market. This is another structural demographic factor that is slow and long-term.

Besides the economy’s inability to create enough jobs, there is also an issue of demand, one that stems mainly from the fact that education in the past three decades has been out of sync with the skills required by the labor market. This has led to a high degree of structural unemployment resulting from dissonance between the jobs on offer and the skills and qualifications produced by schools, academies and universities. In addition to these factors, there is severe discrimination against educated women in the private sector, caused by deeply rooted social and cultural prejudices about the role of women within the family versus their role in public life.

It is obvious that acquiring an education, or professional training, requires the allocation of resources, either private (families funding the education of their children) or public (state subsidies at different stages of education). The expectation then is that for the cost of education to be justifiable, it will have to bring back some revenue, both personal and social. It is therefore understandable that a university graduate, or anyone with any level of higher education — whether in Egypt, the Middle East, or anywhere else in the world — will expect a job they consider socially, financially and psychologically rewarding, one that justifies the resources spent on their post-secondary education. This should also be the state’s policy. It is futile for the state to pour scarce resources into the education of its citizens, only for them to graduate from academies and universities and work in low-skilled jobs, as if it was natural for university graduates to work as shoemakers or carpenters. While those are definitely worthy professions, they require different skill preparations, which cost less than a university education. Thus, a graduate of the Faculty of Commerce working as a carpenter amounts to a plunder of educational resources.

The problem of unemployment is layered and complicated. On the one hand, it is related to economic growth and the capacity to generate jobs. On the other hand, it is connected to the educational structure and its place in the economy and the labor market. It is definitely a bigger issue that goes beyond the personal choices of the unemployed. There is no way to address the issue of unemployment in a country like Egypt, or in any other country for that matter, without reforming the system in public policies and institutions — a self-evident truth that seems to escape the conservative right in Egypt.

The necessities of ideological diversity prescribe the existence of a politically conservative current that defends the status quo, whether out of conviction or to protect specific interests. In principle, this is completely legitimate and acceptable. However, since the economically and socially conservative current is largely influential in running the country — due to the significant weight it assumes both within the private sector and the state apparatus — it should be able to produce a discourse that indicates a better understanding of society’s problems. Instead, conservatives continue to spew the kind of doublespeak that only serves to widen the gap between them and the wider public, reducing the already poor chances of developing a political discourse that could serve the capitalist transformation that they call and push for.

The discourse of the right wing in Egypt falls into the trap of classical economic liberalism, with its cropped vision of the world that does stretch beyond mathematical models of the market and its agents, and leaves no space for all the non-economic complexities of reality, whether political, social or cultural. These complexities are — regardless of the claims of classical economics — an indivisible part of the economic phenomenon itself, and not in any way separate from wider social and political relations. This is particularly relevant in a country like Egypt, which lacks rule of law, and where economic practices are still deeply embroiled in social structures — like family structures and values, religious groups, and the excessive interconnectedness on all fronts between wealth and political power.

Since the foundation of “the world as it should be,” as viewed by classical economists, is non-existent in a country like Egypt, the social discourse of the proponents of classical economics usually revolves around describing and analyzing non-existent things. Examples include the claim that people are stupid, ignorant or lazy; that the number of state employees should be halved; or that Alexandria’s problem is that it has two million citizens too many. This, as far as public discourses go — discourses that are supposed to respond to the country’s problems by diagnosing them and proposing political solutions — can only be described as ridiculous.

The deep antagonism to politics in the discourse of the conservative right wing in Egypt lets economists and technocrats, who think that they have sufficient experience to address the country’s issues, come up with presumptuous formulas that do not go beyond ready-made recipes and prescriptions. If we add that to the fact that the leftist discourse in Egypt is still captive to a Nasserist popularism, which often combines poverty of the imagination with the unrealistic romanticization of a failed experiment, we may begin to understand why identity politics have dominated the political and cultural public spheres since the 1970s to the present day. This is a discourse rejected even by the conservative right, which prefers the authoritarian state to retain its current relationship to religion in the public sphere, and more importantly, to maintain the unchanging status of the ruling elite.

The conservative right in Egypt urgently needs to be saved from itself. It needs to be taught the basic fundamentals of politics, in the hope that it may one day find itself capable of transforming its passion for a free-market economy in Egypt to a political project which has some relevance to the wider public.