What Egypt and Turkey have in common? Saudi Arabia

Since Mohammed Morsi’s overthrow back in 2013, Egypt and Turkey have been pursuing opposite goals, both on the domestic and the regional domain. But today Ankara is trying a rapprochement to avoid isolation 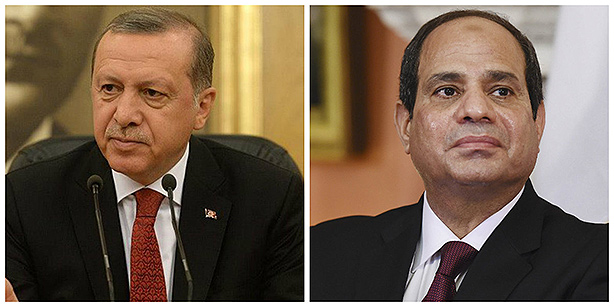 Rome, March 3th 2016. Nena News – If Abdel Fattah al-Sisi were born in Ankara, rather than in Cairo, he would probably represent everything president Erdogan should be worried about. A strong military man, grew up in the deep state’s corridors, ready to take advantage from popular dissent to overthrow an islamists president, send him to jail, convict him to death, outlaw his political movement and eventually replace him. Everything in the name of ‘the country’s stability’. Conversely, if Reçep Tayyip Erdogan were son of a member of the Egyptian Coast Guard, and had he equally followed the path of political Islam with same zeal, maybe he would now be the man that president Sisi wants put to death.

However, after almost three years of diplomatic silence between Egypt and Turkey, something could soon change; and collaboration between the two countries may not belong to the past anymore. Erdogan and Sisi certainly have few affinities. One is among the Muslim Brothers’ main supporter, the other represents their fiercest enemy; one is paranoid about his generals’ threat, the other is a former general who made the same threat concrete; one is among the Syrian rebels’ main funders, the other seems to be quite sympathetic towards their dictator. Yet, keeping these divergences aside, the Turkish president and his Egyptian counterpart have something in common: and it isn’t a shared antipathy for dissident journalists, but rather an ally – with Riyadh as capital – which both are inevitably tied to.

In other words, while the region polarizes in the wake of a proxy-war between Saudi Arabia and Iran, Egypt and Turkey find themselves on the same side of history. And in spite of very different identities and legacies – as long as similar hegemonic ambitions -, their homogeneous Sunni population, with no Shiite minorities which Tehran may leverage on, push them in King Salman’s orbit. While Egypt depends on Saudi aids to keep its economy afloat – even more after the terroristic threat gave a fatal blow to tourism -, Ankara stakes everything on Riyadh, along which it plays a crucial game in Syria. Moreover – as various analysts observed -, after seriously compromising its ties with Moscow and deteriorating its relationship with Tehran for its support to Syrian rebels, Ankara is scared of isolation and hastily seeks to restore former diplomatic relations with old allies: Israel and Egypt high on the list.

Silence with Israel had begun six years ago, when the Mavi Marmara– a Turkish ship transporting humanitarian aids to Gaza – got attacked by the Israeli army on May 2010. Nine Turkish members of the crew lost their lives in the attack. With Egypt, diplomatic relations had been cut instead in July 2013, when Gen. Sisi overthrew Mohammed Morsi’s democratically elected government – which Ankara supported -, sending its leadership to jail. Within this framework, while members of the Turkish government declared that a reconciliation document may be soon signed with Israel, the rapprochement between Reçep Tayyip Erdogan and Abdel Fattah al-Sisi could instead suffer from wider divergences; divergences that only Saudis would be able to smooth out.

The two main issues relate Ankara’s foreign policy – along with its troubled relations with Islamic extremism – and Sisi’s iron fist against the Muslim Brotherhood. Erdogan finds it indeed unacceptable that the movement is treated as a terrorist group, forced to box in the shadows with its higher ranks in jail. On the contrary, Cairo dislikes Ankara’s closeness to Hamas – the Brotherhood’s rib in Palestine -, especially as the Turkish government uses its rapprochement to Israel to demand the lifting of the naval blockade on the Strip. From which Sisi fears Hamas already assistssome armed groups in Sinai.

Moreover, Egypt took quite a different line from Turkey and Saudi Arabia on Syria. Where Riyadh and Ankara openly support rebels, aiming to overthrow Assad; while Cairo is more concerned with defeating Daesh, hoping to hit its moral in Egypt and Libya. Within this context, Sisi may mitigate his posture towards some members of the brotherhood, but it seems unlikely that a rapprochement with Ankara would be coterminous with an amnesty for the whole movement. Turkey, by its side, could acknowledge Sisi’s government full political legitimacy, and maybe relax its grip on Gaza – more a symbolic than a strategic goal -, but it will never give up on Syria; where its foreign policy’s entire fate seems to bereally at stake.

In the meantime, Ankara officially invited the Egyptian president to Istanbul, where a summit of the Organization for Islamic Cooperation will take place in April. While over the last days, some Turkish media reported that president Erdogan would be keen to include Cairo in a working-group on Libya. From this perspective, a resumption of the dialogue seems more indispensable for Turkey than for Egypt; even though a rapprochement would be also praised by Riyadh; which considers the strengthening of the Sunni front as a major priority and that would be quite happy to realign such an axis in anti-iranian function.

Hence, if Erdogan and Sisi didn’t find an agreement, Riyadh could decide to step in; and the $ 8 billions in economic aids that Saudis granted to Egypt late in Decembermay be enough of an incentive.