UN setting the ground for Israel’s expanded siege on Gaza

Fifty-one days of war were not enough to erase the consequences of seven years of siege, which affected every facet of life in the Gaza Strip. After the havoc and devastation caused by the war, it now seems that the siege has been reproduced in different ways. Since before the end of the Israeli shelling, international conditions stipulated that no one was allowed to bring in reconstruction material to Gaza except the “legitimate authorities” [the Palestinian Authority], who only gave “formal” support to Gaza yet was quick to declare that it had reached a tripartite agreement with Israel and the United Nations 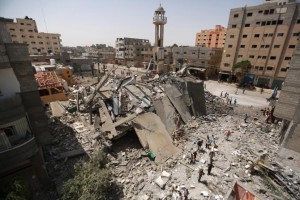 Gaza, 17th November 2014, Nena News – – While Israel was the first to leak information about this agreement, the Palestinian Authority (PA) did not deny it later. But resistance factions in Gaza, particularly Hamas, officially rejected its terms after several of them were put into force. Hamas declared that it had not known the agreement would lead to an “electronic siege by Israel” in a plan under the name of [UN peace envoy in the Middle East] Robert Serry.

A lot has been written about the details of the agreement, including the fact that the Zionist state has been seeking guarantees to tightly monitor building materials so they don’t reach the Resistance.

To this end, Israel imposed “booby-trapped” conditions, including setting up monitoring cameras that work around the clock in storage locations in a territory where electricity is supplied barely six hours a day. This is in addition to deploying guards – who must have a “history of good conduct” – in these warehouses, surrounded by fences that must have a specific height, all in parallel with GPS trackers that the occupation forces wants installed on vehicles and heavy machinery.

At first glance, it seems that the PA’s approval of these conditions is normal and to be expected, given its commitment to Israel’s security and keenness on coordinating with Israelis on all matters. However, what is not understood is the silence of the other Palestinian factions. To be sure, Hamas had rejected the crossings agreement back in 2005, which contained conditions for opening the crossings, especially Rafah, because of “Israeli surveillance through cameras and international presence.” So why has Hamas changed its position now?

It is even worse for Hamas not to know than to know and be silent about the matter. Yet all that Hamas official and spokesperson Taher al-Nunu said in this regard was that his group “was not up to speed from the beginning about this plan.”

“With [the plan] coming into force and as its details came to light, it turned out to be perpetuating and reformulating the siege,” Nunu said. According to him, Hamas realized that reconstruction following this mechanism will take four to 10 years. “[This] is illogical and we refuse it,” he said.

Asked about his group’s silence, Nunu told Al-Akhbar, “Hamas is no longer the government. It is the consensus government that is responsible for the Strip. We therefore cannot reject Serry’s plan like we had rejected the crossings plan.” The alternative, Nunu continued, would be “to demand that the consensus government reject the plan and search for another effective one.”

As soon as the UN got wind of a possible rejection, it made threats, saying that opposition to its envoy’s plan would disrupt the reconstruction process. The Hamas official reacted to this by saying, “The Gaza Strip does not respond to blackmail. The UN is not in a position to threaten to halt reconstruction.”

While researching the controversial details of what is best described as a new “electronic siege,” Al-Akhbar came across new equally controversial information: The UN had asked people wishing to rebuild their destroyed homes to supply complete data about themselves, including not only their names and ID card numbers, but also recent personal photos, the locations of their previous homes, where exactly they intend to rebuild, and blueprints of both old and new homes.

In light of this, it was necessary to return to the Palestinian side authorized to deal with UNRWA, namely, the Ministry of Housing and Public Works. The ministry presently operates in Gaza under a minister from the consensus government. An official at the ministry said that they agreed to Serry’s plan, “but in a way that is compatible with Gaza’s security.” For this reason, he continued, the data they sent only had the names and ID cards of the citizens, in addition to data on the required quantities of building materials to restore their homes. However, the UN rejected this and returned the information, sparking off a new crisis that culminated with the suspension of all cooperation between the two sides. In other words, the process of reconstruction has now stopped.

For his part, Naji Sarhan, an official at the Ministry of Housing and Public Works, said that the ministry rejected Serry’s plan “because it is futile and will prolong the reconstruction process.”

Meanwhile, the consensus government in Ramallah has called on Gaza to implement the plan despite its reservations. For this reason, Sarhan said, “They [the government] will not take part in besieging the Strip.” “The damage survey was carried out by international agencies, so why are there concerns about bringing in building materials?” he asked.

Even in economic terms, Serry’s plan was nothing to be “happy” about. One company that received security approval to store and distribute building materials said that it was forced to install surveillance equipment, including cameras, at the UN’s request.

The director of Awad Shamali Sons, Hatem Shamali, said that he had to install eight cameras, as well as a generator and batteries to power them, adding that a UN inspector has been conducting surprise visits and “obtaining reports on every single gram that we sell.”

Shamali continued, “It is not worth it. We buy a ton of cement from them for 500 shekels ($133), and have to sell it for 520 shekels (a profit margin of $5). This is not enough to cover the cost of labor and transportation, not to mention the surveillance.” Shamali added that if he sells under different terms, all dealings with his company would be suspended.

It was not possible to reach the UNRWA spokesperson in Gaza, currently on leave, for this article. Since he is the only one authorized to comment on the issue, Al-Akhbar could not obtain a comment on the “electronic siege” that will shift the international agency’s role from the realm of humanitarianism to the political and security arena.

However, the foreign relations official in Islamic Jihad, Khaled al-Batsh, said his group views Serry’s plan as a means to formalize the illegal Israeli blockade under the guise of an international cover.

Speaking to Al-Akhbar, Batsh said that the UN plan agreed to by Israel and the PA not only prevents the entry of building materials to the resistance, “but also seeks to provide sensitive security information and details on the owners of all homes damaged in the war, in order to update Israeli databases on Gaza.” “Israel will be able to re-engineer the homes in Gaza by controlling their location and the way they are built,” he added. Batsh also revealed that part of the reconstruction funds “will go to the consensus government to cover the Palestinian Authority’s debts.”

“Twenty percent will be for wages and bonuses for international observers, and we also learned that the UN took $5 million as a fee for transferring funds. This is business, not humanitarian work,” he said.

Regarding the threat to freeze reconstruction, Batsh stressed that his group will not pay much attention to such threats and will continue to reject the plan. “The UN has to make up its mind, is it a partner in reconstruction or a partner in the blockade?” he asked.

The Islamic Jihad official then promised to start working for an alternative plan that will not help internationalize the blockade. Nena News