Turkish elections: the tyranny of majority

Almost the entire campaigning platform of the AKP was based on keeping people’s fears alive, constantly reminding them of “dark old days”. It was not clear to what extend the AKP orchestrated the post-election chaos, but it is certain that it largely benefited from it. 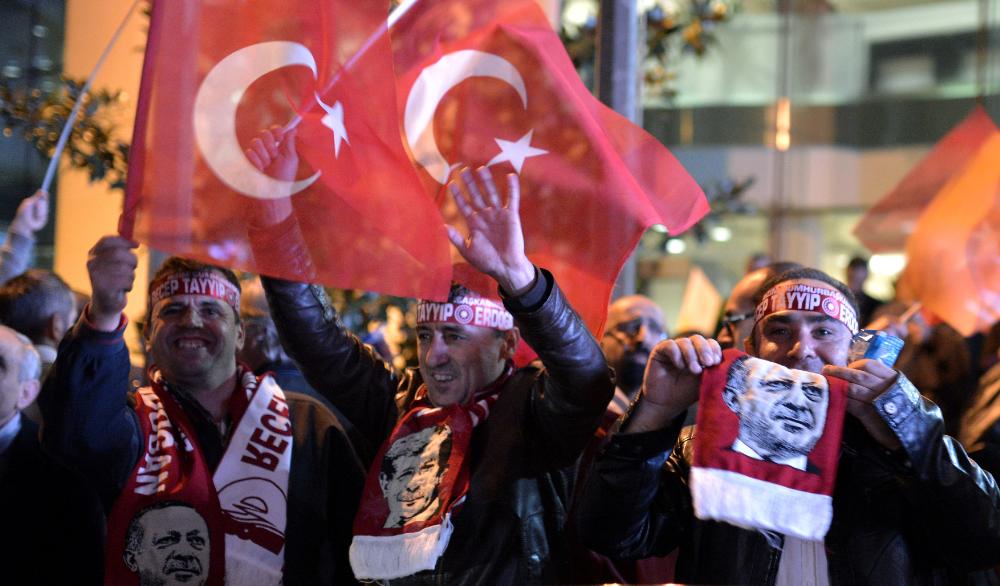 The stunning electoral victory in Turkey, a surprise even for the ruling AKP party, is bad news for Turkey’s minorities, critics and the media. A large conservative base, in addition to Kurds and nationalist Turks, emboldened a government that has been undermining the country’s rule of law and democracy.

On Sunday, people in Turkey flocked to the polls to elect their representatives for the parliament. The ruling party, exceeding the wildest expectations of every single polling company, received 49 percent of the vote – an eight percent increase since previous elections – regaining the single party rule it lost just five months ago.

The pro-Kurdish People’s Democracy Party (HDP) and the Nationalist Movement Party (MHP) lost at least 3 percent of the votes since the June 7 parliamentary elections. The Republican People’s Party (CHP), a leading opposition and a secular front, preserved its votes. At least 4.5 million voters shifted their allegiances from other parties and voted for the ruling AKP. The results are surprising, and worrisome.

Many factors obviously contributed to the dramatic change in voter’s decisions. But the single most important reason is a prevailing fear that an escalating violence could have spun out of control and engulf the entire country that has enjoyed relative stability and more than a decade-long robust economic growth.

President Recep Tayyip Erdogan and Prime Minister Ahmet Davutoglu played into the fear of people, repeatedly highlighting that their government is synonymous with stability. Almost the entire campaigning platform of the AKP was based on keeping people’s fears alive, constantly reminding them of “dark old days.”

For example, Davutoglu told a crowd that “white cars” – infamous for transporting Kurdish dissidents for torture and eventually death – may return to streets if his government is forced out of the power. Erdogan even went further by suggesting that the post-election violence in Turkey could have been avoided if the AKP received necessary votes to rewrite the constitution and expand presidential powers.

In an outrageous statement, a ruling party official said following the Nov. 1 elections that no more Turkish soldiers will die, a remark that sent chills across the country and raised suspicions that the government could be benefitting from the violence.

More than 200 Kurdish civilians and 170 Turkish soldiers were killed, along with hundreds of PKK militants, in a two-month surge of violence during the summer. The HDP could not hold a meaningful campaign on security grounds, but did surpass the electoral threshold, becoming the third largest party in parliament.

As the HDP surged in polls in June and repeatedly renounced violence, it perhaps disturbed and challenged the very existence of the PKK. Shortly after a suicide bombing attack in the city of Suruc in Southern Turkey, the PKK assassinated two Turkish police officers in cold blood, prompting a cycle of violence characterized the post-election period.

The PKK knew that its campaign of violence would hurt the HDP, but carried on with its more ruthless youth branch in urban areas, further alienating conservative Kurds.

Significant number of anti-PKK voters, both from the Kurdish and Turkish nationalist front, left their parties to join the AKP. It was not clear to what extend the AKP orchestrated the post-election chaos, but it is certain that it largely benefitted from it.

A high turnout, relatively free elections and wider voter choices deserve celebration for any democracy, including Turkey. But in a country where one-man rule has significantly undermined the achievements in the last decade and buried hard-won democracy, there is little reason to welcome the outcome of Sunday’s election.

The polls on Sunday were free – people cast their votes unhindered – but far from fair. Only several days to the elections, two critical newspapers and two TV channels were seized by the authorities, not to mention detention and harassment of journalists and the unprecedented pressure on the media.

The AKP victory does not address the deeply-polarized society divided along party lines. For two years, the AKP has ramped up its divisive, bellicose and pugnacious rhetoric to consolidate its conservative electorate. It is now up to them to heal the wounds and bridge the gap.

After the anti-government protests in the summer of 2013, in Istanbul’s Gezi park, people of Turkey had a chance to raise their voice in four tandem elections. The polls, as in many democracies, kept polarized society from upheaval. We won’t have another round elections until 2019. And there is no free media where people can’t see their voices conveyed.

Unless the AKP-led government makes efforts in de-escalating tensions, Gezi-style anti-government protests could likely to resume.

Mahir Zeynalov is a journalist with Turkish English-language daily Today’s Zaman. He is also the managing editor of the Caucasus International magazine. You can follow him on Twitter @MahirZeynalov