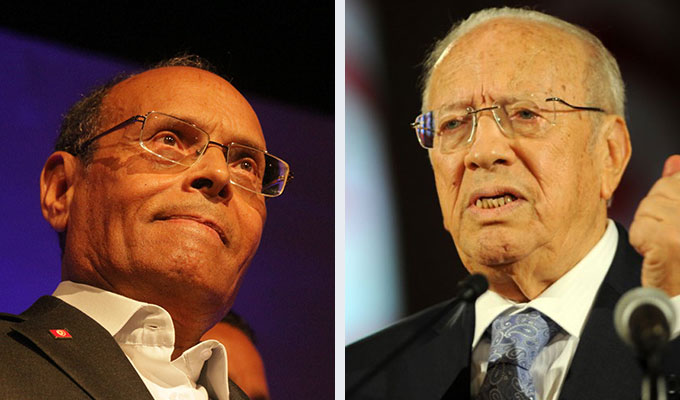 December 20, 2014, Nena News - Marzouki, medical doctor turned human rights activist, says election choice is between democratic progress and a return to authoritarianism. Essebsi led the first round of Presidential elections with 39.5 % of the vote after other old regime figures threw their support behind him

It is no coincidence that Moncef Marzouki was the only one of Tunisia’s two presidential candidates who on 17 December – the fourth anniversary of the Arab Spring – visited the place where it all began.

A medical doctor who became one of the country’s best-known human rights activists, Marzouki chose to make one of his last campaign stops before Sunday’s election in the southern town of Sidi Bouzid. It’s here that the impoverished stall-holder, Mohamed Bouazizi, immolated himself.

His death struck a chord which led to the massive street protests that toppled Tunisian strongman Zine El Abidine Ben Ali and led to similar protests in Cairo, Sanaa, Tripoli and beyond.

Everywhere that Marzouki, who will be 70 next year, has campaigned for president, he has sought to revive the spirit of the Arab Spring, arguing that the election choice on 21 December will be between democratic progress and a return to authoritarianism.

His opponent, Beji Caid Essebsi, who led Marzouki by little more than 6 percent in the first round, was the speaker of parliament at the start of Ben Ali’s rule, and is supported by most of the country’s old elite.

His party, Nidaa Tounes, won the parliamentary elections in October and is set to nominate a prime minister and the new government as soon as the presidency is decided.

In his speech in Sidi Bouzid Marzouki told voters a victory for himself on Sunday would ensure that both the presidency and the government were not in the same hands.

“A balance of power is essential to guarantee there is no return to dictatorship as well as to reinforce the foundations of our nascent democracy,” he declared.

Marzouki’s effort to portray the election in these terms is a clear repudiation of Essebsi’s tactics which claim that Sunday’s vote is a choice between secularism and Islamism.

He has tried to paint Marzouki as a puppet of Ennahda, the party which won the country’s first free elections in 2011 but has subsequently lost ground. Ennahda is often referred to as Tunisia’s Muslim Brotherhood branch but it grew out of very specific local concerns and is not seen as dogmatic, showing itself willing to compromise and share power.

While Marzouki was elected to become Tunisia’s interim president in 2011 by the constituent assembly in which Ennahda had most seats, he disagrees with the party on many issues. For instance, Marzouki is a firm secularist who has long opposed capital punishment, a position that Ennahda does not support. However, the president’s role is limited, and there was a limit to how much influence Marzouki could wield.

Marzouki’s qualified backing and respect for Ennahda instead largely stems from his concern about human rights protections and his recognition all groups are legitimate part of Tunisian society.

His father emigrated to Morocco in the 1950s under political pressure for opposing President Habib Bourguiba, and Moncef Marzouki only returned to his homeland in 1979.

He founded the African Network for Prevention of Child Abuse and joined the Tunisian League for Human Rights. He publicly confronted the new President Ben Ali and urged him to observe the law when the dictator suppressed Ennahda, jailing many of its leaders and driving others into exile.

In 2001, Marzouki founded the Congress for the Republic, a small party which won four seats in the elections this October.

Concern for human rights also led Marzouki, as President in 2012, to break diplomatic relations with Bashar al-Assad’s Syria. His current opponents, Nidaa Tounes, have hinted they will restore them if Essebsi wins on Sunday.

Similarly, Marzouki roundly condemned last year’s coup in Egypt and the subsequent plethora of human rights abuses, including the banning of the Muslim Brotherhood.

A key element in Sunday’s vote is the role that Ennahda supporters will play, given that the party leadership has come out against endorsing either candidate.

Many will no doubt vote for Marzouki regardless and will do so because they agree with his view that an Essebsi victory would make a return to authoritarianism more likely. Marzouki has deliberately avoided calling for Ennahda’s backing so as not to encourage the line that the choice on Sunday is about Islamism or secularism.

The question is whether enough Ennahda supporters will be energised to allow Marzouki to close the 6 per cent gap between him and Essebsi in the first round.

But to suggest Marzouki is putty in Ennahda’s hands is incorrect. For one thing it is not clear Ennahda’s leaders want him to win.  Ennahda’s leadership is being careful not to support Marzouki publicly or attack Essebsi, precisely because many senior Ennahda figures would like to form a coalition government with Nidaa Tounes.

Some Ennahda leaders, reportedly including its president, Rachid Ghannouchi, see this as genuinely the best option. Others see it as a necessary survival strategy in case Essebsi rather than Marzouki wins on Sunday. To many of Ennahda’s rank and file both positions seem ultra-cautious and an abdication of the party’s responsibility.

It has also upset some Ennhada leaders. Hamadi Jebali, Ennahda’s secretary-general who served briefly as prime minister resigned from the party earlier this month. He said he wanted to “serve the objectives of the revolution”. His words were similar to what we have heard so far from Marzouki, who continues to insist that everything is left to play for in Sunday’s vote.

As the run-off for the presidency of Tunisia approaches, leading candidate, Beji Caid Essebsi is banking heavily on his connection to Tunisia’s first president, Habib Bourguiba, to secure a victory.

Internationally, Mr Essebsi has been painted as the leader of an anti-Islamist charge against the Ennahda party, but domestically the veteran politician has promoted himself less by opposing religious politics and more by channelling admiration for a bygone leader.

As early as 1965, Essebsi was appointed interior minister under Bourguiba, a role he held for more than four years before being made minister of defence in 1969. Essebsi then went on to serve in the highly sought-after post of Tunisian ambassador in Paris.

In 1980, Essebsi was recalled by Bourguiba to serve as minister delegate to then prime minister, Mohamed Mzali, and in 1981 he became minister of foreign affairs, a position he held for more than five years until the near end of Bourguiba’s reign.

In addition to his ministerial posts Essebsi also authored a book, “Habib Bourguiba: Le bon grain et l’ivraie (the wheat and the chaff)”, which forms his own personal account of the Bourguiba years and details how Essebsi believes Bourguiba fundamentally shaped modern Tunisia.

Essebsi also served three times as MP for the Tunis constituency, both under Bourguiba and ousted leader, Zine El Abidine Ben Ali, and in 1990 became president of the chamber of deputies during the Ben Ali regime.

But far from seeking to underplay his pre-revolutionary regime role, Essebsi has carefully marketed himself as a Bourguiba successor. When Essebsi launched his presidential campaign on 2 November, he chose to do so at the mausoleum of Habib Bourguiba in the city of Monastir.

For some, Mr Essebsi’s pitch to return the stability of old is highly attractive. “Beji will be just like Habib Bourguiba and will bring back pride to Tunisia,” said Mr Riahi, a transit manager for Tunisair.

“He is old in years, but he has the mind to match and is a real leader. He has the stateman’s knowledge of how to get things done,” he said.

However, Bourguiba’s legacy is mixed. Although he is credited with spreading education and advancing women’s rights, his rule was also decidedly authoritarian with little room allowed for dissident and little democratic decision making. In all three of the presidential elections held under Bourguiba (in 1964, 1969, and 1974) the President received 100 percent of the vote.

Essebsi’s use of the Bourguiba legacy has also been criticised by Bourguiba supporters, some of whom have pointed out that Essebsi did not side with the ageing autocrat when Ben Ali effectively removed him from power in 1987.

However, Essebsi’s strategy of using his Bourguiba connection appears to have brought significant success. Essebsi led the first round of Presidential elections with 39.5 percent of the vote to Marzouki’s 33.4 percent after other old regime figures threw their support behind him at the last minute.

Essebsi’s pitch has also found favour outside of Tunisia. Following a trip to the United Arab Emirates by Essebsi in May, a gift of two luxury bulletproof cars was delivered to Nidaa Tounes from the Emirates.

Essebsi’s opponent, Marzouki has made attempts to use his Bourguiba strategy against him. At a rally in the town of Beja on 12 December, Marzouki claimed an Essebsi victory would “bring the country back to square one and ensure the return of the old regime”.

“Tunisia would lose everything that it has achieved in the three years since the revolution,” Marzouki told assembled supporters.

For their part, Nidaa Tounes have criticised Marzouki’s rhetoric and accusations of fraud in the first round of elections as a “threat to social peace”.

The Islamist Ennahda party chose not to field a candidate in the race, and at an Ennahda Shura council meeting on 13 December, the party decided to go further still and remain neutral in the election, refraining from backing Moncef Marzouki’s bid.

The decision was far from unanimous. High profile members including former Prime Minister, Hamadi Jebali dissenting from the decision threatened to split the party, according to Vice President, Abdelfattah Morou.

Ennahda’s decision is likely to Essebsi’s benefit. However privately Nidaa Tounes campaigners concede that this presidential campaign will be Essebsi’s last, win or lose.

Whether Tunisians will be sufficiently convinced by his pledge to return the supposed glory of the Bourguiba days, or he will become merely the last chaff of a dying legacy to be separated from the wheat remains to be seen. Nena News