The Turkish flag over Afrin

Erdogan has denied that he wants to annex Afrin to Turkey. Those who doubt his intentions may view raising the Turkish flag in the heart of the city as the first step towards its ‘Turkification” writes Abdelbari Atwan 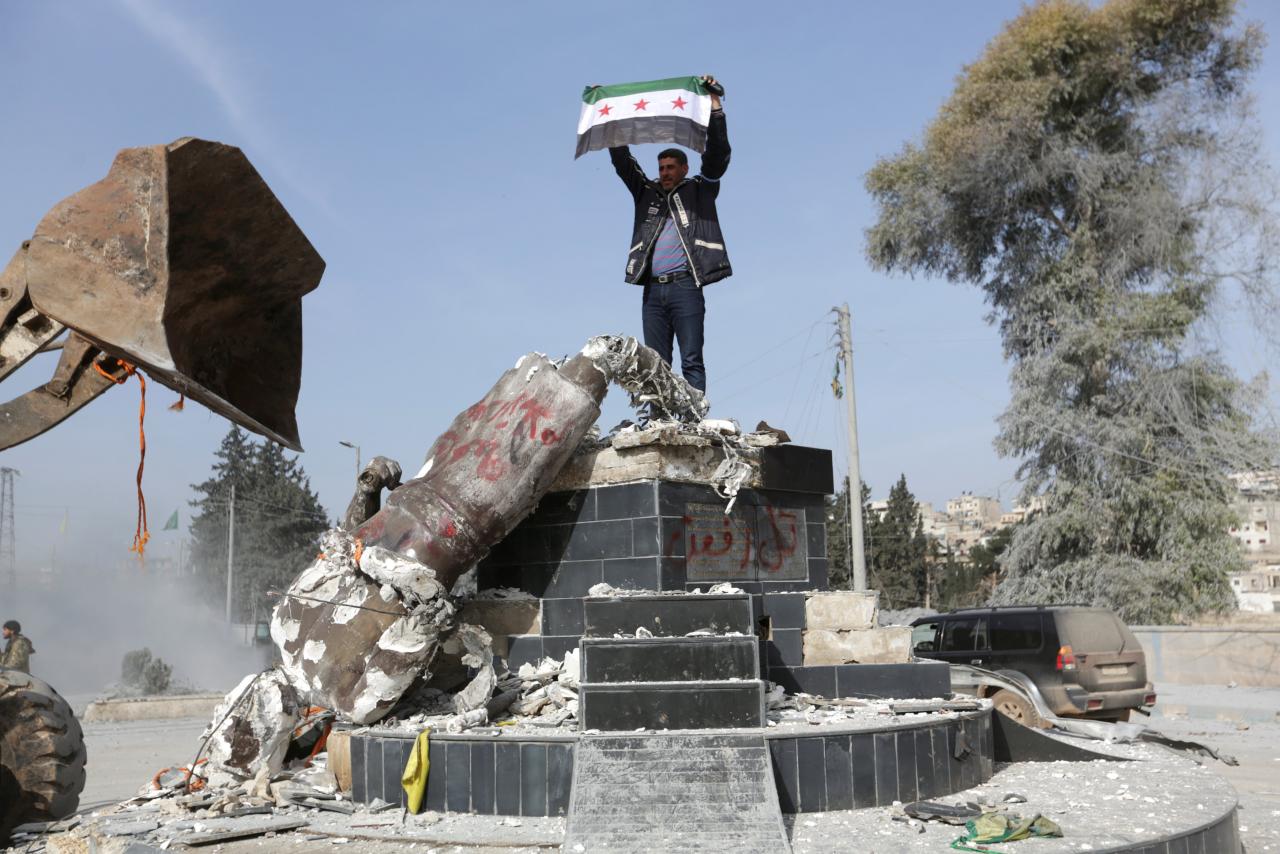 On Sunday, Turkish forces and the FSA (Free Syrian Army) units loyal to them officially took control of the city of ‘Afrin in Northern Syria. This follows a military operation that has lasted for two months in which 1500 fighters from the YPG (Kurdish People’s Protection Units), 400 members of the FSA, 46 Turkish soldiers, and over 300 civilians including 43 children were killed – according to a report by the pro-opposition SOHR (Syrian Observatory for Human Rights).

A number of indications could decide the main features of may happen next after the Turkish forces and their allies’ entry into the city:

– First, the Turkish flag was raised over the Municipal Council building in the city center and President Recep Tayyip Erdogan announced this in a speech delivered to his party’s supporters. So does this mean that ‘Afrin is now Turkish territory? Has it been stripped of its Syrian identity?

– Second, both the Syrian state and its Russian allies have kept silent in response to the city’s capture. Does this mean that a deal was struck that facilitated the Turkish forces’ entry – according to which ‘if you help us take back the Eastern Ghouta, we will keep silent about your capture of ‘Afrin, if only for a while’?

– Third, President Erdogan has announced on more than one occasion that capturing ‘Afrin would be the prelude or a launching pad for an attack to capture neighboring Manbij. So, when will this attack take place? And will there be a clash between Turkish forces and the American troops stationed in Manbij since the latter have refused to comply with President Erdogan’s demands to withdraw from the city, as the Russian forces stationed in ‘Afrin did?

– Fourth, according to reports, the Kurdish YPG withdrew from ‘Afrin after their resistance collapsed in light of the scale of Turkish mobilization and the aerial bombardment of the besieged city. Therefore, the pressing question concerns what these Kurdish forces will do next: Will they accept defeat, or will they opt for a guerilla war to undermine Turkish control?

President Erdogan’s plan to capture ‘Afrin is based on three main objectives: First, to destroy the YPG forces that he views as an extension of the separatist PKK (Kurdistan Workers’ Party); second, to prevent the establishment of Kurdish autonomy in ‘Afrin near the Turkish borders; and third, to return hundreds of thousands of refugees from the area who had fled to Turkey together with millions of Syrian refugees and establish a safe zone between 30 kilometers and 50 kilometers deep.

President Erdogan has repeatedly denied that he wants to annex ‘Afrin to Turkish territories in a manner similar to what happened to Iskenderun province [Turkish Hatay]. But those who doubt his intentions may view raising the Turkish flag in the heart of the city as the first step towards its ‘Turkification,’ despite the fact that this flag was raised alongside the FSA’s [Syrian] flag.

The opposition SDF (largely Kurdish Syrian Democratic Forces) have fiercely attacked Russia and accused it of collusion with the Turkish military intervention when it withdrew its forces [from ‘Afrin] and opened the city’s airspace to Turkish warplanes that bombarded ‘Afrin’s defenders. This means that relations between the Kurds (or most of them) and the Russians have sunk below zero.

For its part, ‘Afrin’s [Kurdish] Self-Administration Authority has warned Turkey that it will fight until all the areas captured by Ankara are recaptured. A statement it issued said: ‘Our war against the Turkish occupation and the takfiri force that goes by the name FSA has now entered a new phase, where we will move from direct confrontation to hit-and-run tactics’ – that is to say, the kind of guerilla warfare at which the Kurds are so adept.

The Syrian authorities’ official silence regarding Turkey’s assault on ‘Afrin raises a number of questions. We do not exclude the possibility that it is a result of coordination between these authorities and their Russian allies. The Syrian leadership has always viewed any Turkish intervention in ‘Afrin as a violation of Syrian sovereignty. It deployed units from the Popular Forces loyal to it so as to fight Turkish forces alongside the Kurds.

There are a number of explanations for this official Syrian silence:

– First, the leadership in Damascus may have received Russian assurances that the Turkish presence in ‘Afrin is temporary and that it will end after the Kurdish armed elements there are destroyed. That is something that the Syrian leadership does not oppose.

– Second, this leadership may have plans or wishes for ‘Afrin to turn into a lethal trap for the Turkish forces and their allies, drowning them in a bloody war of attrition during which the Syrian leadership would provide military backing for the YPG.

– Third, this leadership may be wagering on a Turkish/U.S. clash in the Manbij area, hoping for ‘a plague on both their houses.’

We cannot claim that any one of these explanations is more likely than the other. The current and future situation of ‘Afrin remains ambiguous, and it would be wise to wait until the dust settles, the positions on the ground clarify, and the reactions of the various parties to the conflict become clearer. However, what is certain is that the Turkish forces’ entry into the city and raising the Turkish flag over its main buildings give the impression that a new and very dangerous chapter in the war on Syria has begun.

Can one say that the ‘Afrin trap for Turkey is, in one form or another, a repetition of the Kuwait trap for Iraq and its president Saddam Hussein that was set up for him 28 years ago with U.S. and Arab collusion?

We leave the answer to the coming weeks and months’ developments