Israel may be ready to offer some facilities to Hamas in Gaza but only in return for consolidating the inter-Palestinian split, says Hani al-Masri in Palestinian al-Ayyam 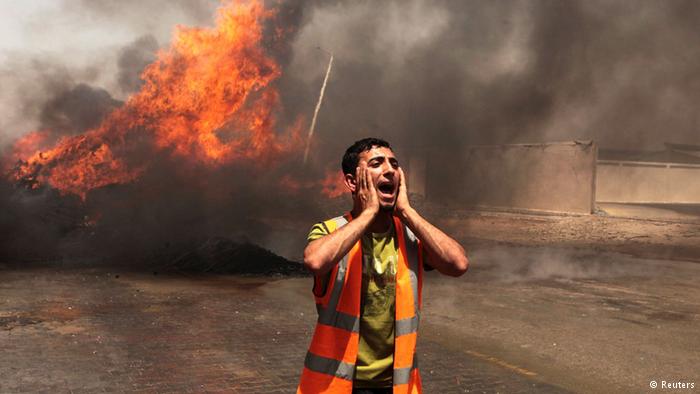 During the latest Israeli aggression on the Gaza Strip, the Netanyahu government, with the approval of the U.S. and some European and international circles, hinted that it may be willing to allow a seaport and an airport to be built, lift the siege, and allow for reconstruction, if Hamas were to agree to a long-term truce and disarm and end its resistance – in other words, apply the West Bank model to Gaza.

Israeli circles inside and outside the former government preferred allowing Abu Mazin’s PA to extend its full authority over Gaza, because that would help ensure Israel’s security, the resumption of negotiations, and an agreement that permits the establishment of a Palestinian state based on Israeli preconditions – namely, at the expense of the refugee’s cause, and without Jerusalem, without sovereignty, on disconnected areas and on only a part of the West Bank. In other words, stripping it of all the requirements of genuine statehood other than the name.

Hamas vacillated between two options: a readiness to consider Israel’s proposal but without accepting to disarm the resistance while accepting a long-term truce; and remaining under the PA’s umbrella, especially after the formation of the national accord government [in April 2014] while maintaining the sources of power that allow it to control the PA but without being in government. It forgot that Israel will negotiate with it in exactly the same manner as it negotiates with the PA. That is to say, it wants everything upfront while offering little in return, and which it will later try to take back.

Hamas realizes that its deteriorating relations with Egypt, the fact that its relations with Iran have not returned to their former status, and in light of its financial crisis that has prevented it from paying its government employees’ salaries regularly, leave it with few options.

It cannot lift the siege, open the crossing points, and reconstruct the Strip if it – and not the PA that is recognized internationally and by the Arabs – is the umbrella under which all these things are to be achieved. This is why it agreed to the formation of a joint Palestinian delegation headed by [Fateh official] ‘Azzam al-Ahmad to negotiate the truce’s terms, while trying to ensure that it has the final word regarding any such agreement. But the negotiations ended and all it got was a ceasefire [without conditions] with the result that the situation got worse than it was before the aggression.

According to numerous Hamas, Israeli, Arab, and international sources, Hamas and Israel have held indirect talks via Qatari, Turkish, European, and international mediators conducted against the background of a ceasefire agreement, but without an agreement on opening the seaport and airport, or on lifting the siege and starting reconstruction.

Negotiations over these matters were to be continued, but nothing has happened so far, and it does not seem about to happen any time soon. At the same time, the national accord government has not fulfilled its responsibilities regarding the Gaza Strip because the PA – as it says – does not want to be used to offer cover for the Hamas government while it remains in effective charge. The PA wants the accord government to actually rule. Hamas, on the other hand, rejects this without a comprehensive agreement over all issues. Meanwhile, the Gazan citizen remains the victim, ground between the two jaws of the inter-Palestinian split, and trapped between the Israeli siege and aggression and the [Egyptian] closure of the Rafah crossing.

During its indirect negotiations with Israel, Hamas has been motivated by the loss of any hope of achieving reconciliation soon; by the Strip’s worsening crisis, and by its fear that the current conditions will lead to total collapse or an explosion if things remain as is.

It believes that Gaza’s steadfastness and the brave resistance it embodied during the last aggression, as well as Israel’s fear of a new confrontation or the collapse of the Hamas authority – which could lead to total chaos and a vacuum that is most likely to be filled by extremist Islamist elements that are under no one’s control, since the national accord government and Fateh cannot fill that vacuum – could convince Israel to reopen the seaport at least, even if international supervision, but without disarming the resistance, all in return for a long-term 5 to 15 years truce.

When matters got serious, Israel asked Hamas via mediators to end the smuggling and development of weapons, and end the tunneling, especially that of offensive tunnels dug along the borders targeting Israel first and foremost. This is because the Netanyahu government’s wager is that the dire straits in which the Strip and Hamas find themselves could drive them to accept Israeli preconditions.

In fact, the Israeli government’s main concern is to ensure that any step must contribute to prolonging and deepening the inter-Palestinian split, transforming it into total separation. This is because this could totally block any solution that ends the occupation and establishes a Palestinian state on the territories occupied in 1967, and paves the road towards completing a fait accompli on the ground, leaving the Israeli solution as the only practical option.

So far, Hamas is adamantly denying what President Abu Mazin has been repeating, namely that it has held direct negotiations with Israel, despite the fact that a number of its leading figures have confirmed that there have been ‘contacts’ and ‘conversations,’ while others have gone so far as to express their readiness to hold direct negotiations, while clinging to the Palestinians fixed national principles and resistance, and without repeating the concessions offered by Fateh and the PLO on such issues. They say they are willing to negotiate, especially if the aim is to deal with livelihood and humanitarian issues, such as prisoner-exchanges, lifting the siege, reopening the crossing points, and reconstruction.

The fact is that direct negotiations may have already begun, or may happen soon, if the door of national unity is not reopened. So far, no agreement has been reached, and it would be difficult to reach one if each side continues to cling to its preconditions regarding disarmament or the resistance’s weapons. Moreover, the success of the extremist right in the recent Israeli elections and the formation of the most extreme government since Israel’s establishment may improve the chances of reaching an agreement between Israel and Hamas, or at least improve the existing situation but without reaching an agreement.

If [Labor Party led] ‘Zionist Camp’ had won the recent elections or had taken part in the government, the balance would have tilted in favor of extending Abu Mazin’s PA’s power to the Gaza Strip, with stricter policies towards Hamas. This is because Zionist Camp is open to negotiations and fears the consequences of the current stalemate on the ‘peace process,’ leading to the emergence of options and alternatives that are not in Israel’s favor, including the one-state option that threatens Israel’s survival as a ‘Jewish’ state.

This is because Netanyahu’s fourth cabinet is even more strongly opposed to the establishment of a Palestinian state than his previous cabinets, even if this is based on Israeli preconditions. For the most that this fourth cabinet can agree to is a ‘self-rule authority’ in return for ending the conflict and a final agreement. It is, after all, the government of settlers and the advocates of ‘the entire land of Israel.’

And this is not changed by the fact that Netanyahu has returned to trickery and maneuvering by speaking of the Palestinian state. For what is more important than what he says is the fact that the government’s program does not include any reference to the Palestinian state. Moreover, all that this government is doing and planning to do renders the establishment of that state more impossible than at any previous time.

This is especially true of this government’s expansion of settlements, its plans to transform the illegal settlement outposts into parts of the existing settlements or into ‘legal’ settlements, as happened in the past, with tens of such outposts, and all against the background of the completion of the process of ‘Judaization’ and ‘Israelization’ of Jerusalem, the transformation of the West Bank’s separation from the Gaza Strip into something permanent, and the deepening of the fact that the PA in the West Bank is an Authority without any authority.

To achieve all these aims and in order to avoid being dragged into a new confrontation at a time that is inappropriate for it, Israel prefers a situation in which the Hamas authority continues to control the Gaza Strip. This is not out of love for Hamas, but because that ensures that the inter-Palestinian split will continue and will be used to blackmail President Abu Mazin and squeeze new concessions from him, such as an agreement to resume negotiations without preconditions or in accordance with soft preconditions, or his willingness to consider solutions that would damage Palestinian rights. Moreover, this can ensure that Hamas continues to be held responsible for what is happening in the Strip, provided it remains weak vis-à-vis Israel. This is why, every time Hamas becomes stronger, a new aggression is waged against it, forcing it and the Strip to pay a huge price for clinging to the option of resistance, to the smuggling and development of arms, and to digging tunnels.

In order to implement this policy and prevent the situation in the Gaza Strip from collapsing or exploding, Israel has agreed to offer numerous concessions, allowing money to enter the Strip to pay the salaries of the Hamas government employees, as well as the entry of goods and some reconstruction material. Israel has also granted permits to tens-of-thousands of Gazan workers to work in Israel, and increased or extended the permits for VIPs and the businessmen to enter Israel and move between the West Bank and Gaza.

The continuing inter-Palestinian split and the fact that both parties are unwilling to offer concessions and adopt positions that would end it and restore national unity on the basis of common denominators, full and real partnership in the PA and the PLO, and referral to the people based on the rules of an accord democracy, means that they will continue to compete to win Israel’s favor.

Israel would then choose the party that offers it most; but the most that it can offer the PA in the West Bank is ‘self-rule’ but under the occupation state’s sovereignty, and the most it can offer in Gaza is a ‘mini-state’ in return for a long-term truce.

By contrast, the road to unity and resistance based on an agreed-upon strategy could open up broad horizons that may save the cause, the land, and the people.