The child soldiers of Yemen

Lured by money and a sense of purpose, a growing number of young boys are being recruited by Yemen’s warring factions 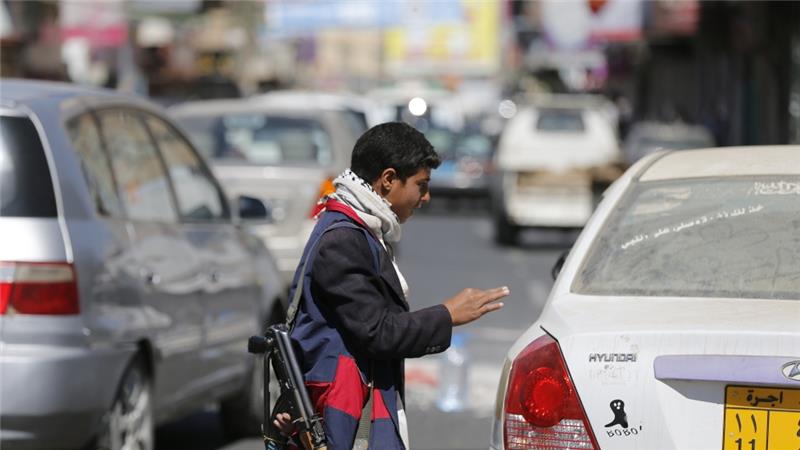 Roma, 9 marzo 2015, Nena News – Sanaa, one of the oldest cities of the world, is now a patchwork of many checkpoints. Last September, the heavily fortified Yemeni capital fell to Houthi fighters, and in just six months the rebels dissolved the assembly and took over the government. As the world reacted with concern and foreign embassies in the capital closed in a hurry, Yemen seemed to be devolving into a brutal power struggle between the Houthis in Sanaa and a UN-backed president in Aden.

Many of the foot soldiers of this conflict, guarding turf along the battle lines, are children. Young boys between 14 and 16 are often seen with rifles and handguns strapped to their sides, protecting the recently seized streets of Sanaa.  These young boys are usually recruited from within the locality, lured by money and a sense of purpose in fighting for the community. Yemeni activists say they earn 500 Yemeni rials ($2) a day, along with a hot meal, in return for a day in the sun and vigils at night.

“You will find them at every checkpoint, every area in Sanaa, near the parliament, near the cabinet. We have never seen these young boys before January when Houthis took over the [presidential] palace,” Nasim al-Moulki, coordinator of the Child Protection Initiative, a quasi-governmental body in Yemen, told Al Jazeera.

The recruitment of children by armed groups is broadly prevalent, and in some cases a reality perpetuated even by the nation’s army. In 2011, child soldiers were recruited by the Yemeni Armed Forces and pro-government fighters against the Houthis in the north during the popular uprising against former President Ali Abdullah Saleh.

“The recruitment of young children grew since the beginning of war in Saada in 2004. Children were enlisted by the army, different tribes and armed groups. In 2011, there was clear recruitment by everyone – especially by the military and the tribes,” a Yemeni child rights activist, Omklthom Mohammed Alshami, told Al Jazeera.

Lack of access, coupled with a precarious security situation and a fear of reprisal among locals from armed groups, have made it difficult for monitoring groups to put an exact figure on the number of children involved in armed conflict in Yemen. “The number of Houthi fighters is more realistically closer to 20,000 to 30,000, of which a rough guesstimate of 30 to 40 percent are under 18, and 15 to 25 percent under 16,” Yemen analyst Hisham al-Omeisy told Al Jazeera.

Last year, the United Nations verified the recruitment of more than 100 children, some as young as six. Almost half of them were inducted during recruitment drives at mosques and markets by Salafists from southern provinces in the fight against the Houthis. “You see it when you drive around the country or in Sanaa, very young boys with weapons manning checkpoints. That is wrong. Children should be in school,” Julien Harneis, the UNICEF representative in Yemen, told Al Jazeera.

Child soldiers are also initiated into regional conflicts by other armed groups, such as al-Qaeda in the Arabian Peninsula and its affiliate, Ansar Al Sharia, with money and the promise of  glory in death.

A 2013 report by the UN secretary-general on Children and Armed Conflict in Yemen says there are reports of young boys being recruited by Ansar Al Sharia with the clear purpose of sexual exploitation. These cases are largely under-reported because of the social stigma attached to it. The report also highlights the use of drugs to sedate children, noting they have been forced into the battlefield.

The prospect of a steady source of income for families wracked by poverty has led many young boys to drop out of school and join these armed groups. Often, they work at checkpoints, manage kitchens or are embedded as spies. Yemen is the poorest country in the Middle East, with 45 percent of the population going to bed hungry every day. Poverty, lack of education, family retribution and a deeply entrenched sense of masculinity and filial duty, activists say, all contribute to the militarisation of young children.

For international agencies like the UN, 2014 came with a promise of hope when an action plan was finally set in motion in partnership with the Yemeni government to end the recruitment of children. A dialogue with the Houthi leadership to release child soldiers and reintegrate them began two years ago. However, given the present political uncertainty and an upsurge in nationwide violence, progress on this front seems tenuous.
Leila Zerrougui, the UN special representative for children and armed conflict, told Al Jazeera that in the past year, there have been reports of a rise in the recruitment of children, notably by Houthi forces and other local militias, while the Yemeni armed forces have continued to enlist children.
“Throughout 2014, the UN maintained its engagement, but there was no follow-up from Houthis in the past few months. A commitment to protect children followed by constructive engagement means that when a crisis strikes, children will continue to be protected. I call on the armed group to honour its commitment and to shield children from the impact of conflict,” Zerrougui said.

But pro-Houthi political activist Hussain al-Bukhaiti says Yemen’s capital is safe because of the young boys guarding it. He says they are part of “popular committees” formed by locals, especially in tribal areas, where families – in keeping with Yemeni tradition – send their children to protect their neighbourhoods. He insists that only trained fighters are sent to conflict zones, and denies that Houthis pay the children for their service.

“These international agencies are just telling lies… We consider boys who are 15 to 16, as adults. It is part of the American propaganda. Most of the agencies are from the West and supported by the Gulf countries,” Bukhaiti told Al Jazeera. “Everything they say depends on their relationship with the US”. Nena News