Those deluded into believing that ‘Arab’ ground troops will join the war against ISIS should understand that the only alternative is to reach a deal with the Syrian regime, says ‘Urayb ar-Rintawi 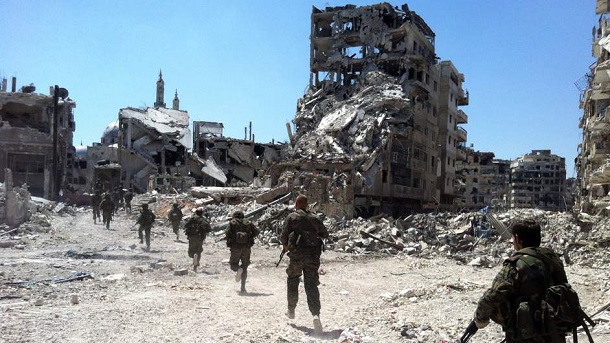 Certain views that are echoing in the hallways of international decision-making suggest that the ‘Arabs’ should be fighting the ground war on ISIS. Washington is displaying a special interest in forming such a force after coming to the conclusion that the war on terrorism cannot be decided ‘from the air’ and that it is necessary to prepare ground forces to confront the ‘Caliph’s army’ in its own areas of deployment and control. And this is against the background of a Democratic/Republican consensus against any involvement in a new ground war in the Middle East.

This idea faces a number of obstacles, and it is difficult to see how they can be overcome. These include which ‘Arabs’ are we speaking of? Which states are willing to send their sons to the battlefield? Is it possible to reach an ‘Arab’ accord over the war’s aims and what happens afterwards? And what about the countries that are already stricken by the terrorist threat – basically, Syria and Iraq?

Moreover, where would these forces be deployed? From where will they be launched and via which borders will they enter the war zones? And what about the neighboring countries’ position, that of Turkey, in particular? Is it possible to build an Arab/Turkish accord in light of the deteriorating relations between Ankara and most, if not all, Arab capitals? And, finally, what about Jordan? Will it be a partner in this ground force now that it has highlighted its participation in the air strikes and its intelligence and logistical cooperation with the coalition forces?

To begin with, the candidates for joining a ground war with ISIS are basically the Gulf states + Egypt + Jordan. For their part, the Gulf states have never displayed any special talent in ground wars, including those that have raged on their borders. Their armies have no special expertise in fighting wars of this or any other kind, especially the street battles and urban warfare of the sort they would be deployed to fight. In fact they rely on a wide range of Arab and foreign allies to preserve their own internal security.

As for Egypt, it is barely able to confront the terrorism challenge in Sinai and on its own western borders [with Libya], not to mention preserving security and stability within the country itself. It is not expected to make a significant contribution in this field.

And when it comes to Jordan, it has continued to leak reports that it refuses to get involved in a ground war, while leaving the door open for limited, localized and surgical operations that its elite and Special Forces may carry out in certain circumstances based on specific intelligence information.

So who among the Arabs will command and participate in this war? I do not believe that there is a single Arab country that has any desire or eagerness to fight a ground war against ISIS. Even those who may harbor such a desire cannot achieve victory. And who are both willing and able, have more pressing matters preoccupying them and they are devoting their armed forces’ energies and military equipment to addressing their priorities.

Moreover, Iraq has declared its absolute opposition to the presence of any foreign troops on its soil. It has said on more than one occasion that it is not suffering from lack of soldiers but lack of equipment and air cover. For its part, Syria has declared that any forces that enter its territories without prior agreement and coordination would be viewed as an act of aggression that calls for an appropriate response. So, if the two countries that are most afflicted by the terrorist ailment reject the entry of any ground forces into their territories, who will is going to be so eager to deploy such forces, and who can bear the consequences of this sort of decision?

And what about the positions and demands of Syria and Iraq’s Arab and regional neighbors? Jordan is not an appropriate venue for ground forces to enter Syria via its territories. Such forces would have to traverse Syria from its southernmost tip to its northernmost tip to confront the ‘Caliphate State’s’ mujahidin. There are vast logistical, geographical, and military obstacles facing such a move, not to mention Jordan’s ‘sovereign’ political decision.

Lebanon, which is divided over every issue, can offer neither a headquarters nor a passageway for these forces – otherwise security, stability, the government, the parliament, and the national accord in the country would all collapse.

This leaves us with Turkey, which has set a number of impossible preconditions for providing facilities for the international coalition’s war on ISIS, and that no country in the world has accepted so far except for France, which is afflicted with the disease of searching for a role or share in any cake. And as for Ankara’s relations with Cairo (and most of the Gulf’s states to a lesser extent), they do not even allow for the thought of building an Arab/Turkish accord over Syria. Nor do these relations help us to predict the success of the scenario that calls for deploying Arab forces to excise ISIS.

We are therefore facing a case of wishful thinking that seeks to avoid the most awkward scenario of building a strong coalition between the regular Syrian army, the Syrian Kurdish peshmerga forces, the remnants of the moderate opposition and the Sunni clans, similar to the anti-ISIS coalition that exists in Iraq. I suppose that a long time will pass before Washington first, followed by some of its allies in the region as well, will be able to climb down the tree while saving the maximum possible amount of ‘face,’ overcoming the psychological barriers that prevent them from dealing with Assad’s regime and from beginning to build a new military coalition on Syrian territories, to confront the threat posed by ISIS and terrorism.

Over the weekend, most newspapers published a report about the ‘Death of the Syrian Revolution.’ The report contains testimonies and interpretations of Syrian activists who have come to the realization that their peaceful revolution has been turned into its opposite and has been hijacked by extremist forces and regional and international capitals; and that the time has come for a new way of thinking and a different approach.

This new way of thinking has led [former Syrian National Coalition leader] Sheikh Moaz al-Khatib to head to Moscow, and [UN Envoy to Syria] di Mistura to offer his initiative to ‘freeze the conflict in Aleppo.’ These new approaches give the impression that we are heading in this direction. But certain regional and international parties’ intransigence and the Damascus regime’s insistence on blocking the path of dialogue with its opponents have obstructed this approach so far.

But it is most likely that most parties will discover that they cannot avoid the inevitable.