There are growing signs that, starting with Raqqa, the U.S. is implementing a plan to partition Syria into ‘interim autonomy’ areas for the various religious and ethnic groups, maintains the editor-in-chief of Raya al Youm online daily 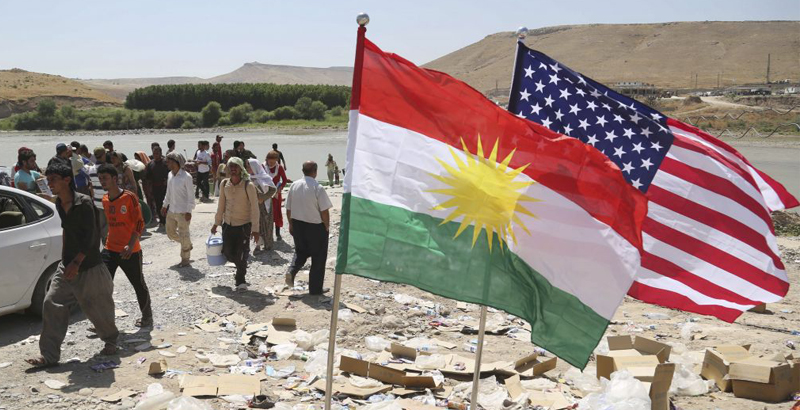 Rome, 30th of March 2017, Nena News – The current tune in Washington and some European capitals, and that is being strongly repeated in the Western media, speaks of Syria’s partition by establishing ‘interim autonomy’ areas for the various ethnic and religious groups as a preliminary solution for the Syrian crisis.

I personally took part in more than one media event and was surprised to hear this proposal repeated, especially by American experts involved in the debate in [last week’s] the international conference on the war on terrorism hosted by Washington.

New U.S. Secretary of State James Tillerson, who is a novice to politics, presented the current plan that is being rapidly implemented on the ground, using moderate terms. He said: ‘We will establish interim autonomy areas, and these are totally different from the safe zones that the Syrian opposition wants; their aim is to allow the Syrian refugees to return to them.’

More succinctly, Syria’s partition may begin from the city of Raqqa and its environs – a circumventing step that leads to regime change. This is exactly what happened in case of the UN Security Council resolution calling for the protection of civilians that was used as cover for bombing Libya and changing its regime.

The capture of Tabaqa dam and airbase by U.S. forces (300 soldiers on the ground) backed by the Kurdish SDF (Syrian Democratic Forces) on the pretext of preventing the dam’s collapse or destruction, the control of the flow of the Euphrates’ waters from Jarabulus into the city, and severing ISIS’s supply routes from the Northeast – are all preliminary steps towards the establishment of the first U.S.-sponsored ‘interim authority’ area in Raqqa Governorate.

U.S. forces have severed the Raqqa/Aleppo road in an attempt to prevent the Syrian army and its allies from advancing on the city and participating in its liberation by any means possible. This was part of the preparations for an all-out offensive that French Defense Minister Jean-Yves Le Drian said will begin next month.

The Americans and their Western allies do not want to repeat in Raqqa what happened in the liberation of Berlin. They do not want a Russian or Syrian partner in the city. British and French forces will therefore head to Tabaqa to join U.S. forces in entering ISIS’s capital and ‘cleansing’ it totally with the help of Kurdish forces.

According to Western reports, Trump is currently setting up marquees to celebrate this expected victory. It is not unlikely for him to head personally towards the city after its ‘liberation’, if all things go according to plan. But we have our doubts.

According to American leaks, the city is supposed to be handed over to local [Sunni] Arab tribes. The ‘leader’ who will be crowned may be [former Syrian opposition head] Mr. Ahmad al-Jarba, one of the sheikhs of the Shummar tribe, who has formed a tribal army of five thousand fighters. He may therefore play a similar role to that of  [Saudi] Prince Khaled bin Sultan, the commander of the Arab forces that entered Kuwait city after Iraqi forces were ousted from it at the hands of American General Schwarzkopf in 1991.

We cannot speak of this plan’s chances of success or failure at the moment. But many questions may be raised, most importantly: Can Mr. Jarba and his army administer this ‘pocket’? Will the other tribes accept his supposed leadership? Will the SDF render him this service – after all, it is expected to suffer extensive casualties – free of charge and without receiving anything in return? And will this be the establishment of a Kurdish belt along the Syrian/Turkish borders?

History has taught us that whenever U.S. forces enter any Arab or Middle Eastern country, they face fierce resistance and suffer many casualties as a result, if only after a short period of time. This is what happened in Beirut in 1982, Mogadishu 1994, and Baghdad 2003. And we do not believe that Syrian cities, and specifically Raqqa, will be any exception. Nor should we forget that it was the U.S. military intervention in Iraq that sowed the first seeds for ISIS, and that it was the U.S. military intervention in Afghanistan in the 1980s that watered the Qa’ida plant.

Military intervention seems easy on paper. But turning Raqqa from being the capital of ISIS to that of a hybrid self-rule authority as part of a scheme to partition Syria may be akin to jumping out of the frying pan into the fire.