Remembering Rachel Corrie, icon of the struggle for Palestinian rights

The American activist was killed by an Israeli bulldozer operator on March 16, 2003, as she protested the destruction of Palestinian homes during the second Intifada 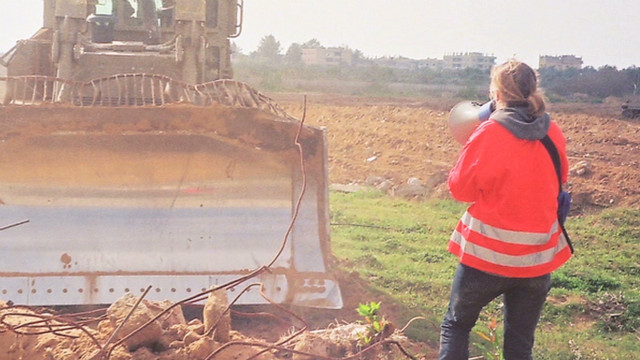 Rome, 20th March 2018, Nena News – On April 10, Rachel Corrie would have celebrated her 39th birthday, perhaps together with friends and family in Olympia, the small town in the state of Washington where she grew up and studied. And she would have probably continued her activism for peace and justice which led her in her youth to join the International Solidarity Movement to support the rights of the Palestinians.

But Rachel, a quiet girl who kept to herself, lost her life on March 16, 2003, only 25 years old, under the tracks of one of the Israeli army’s armored bulldozers while she was trying to prevent the demolition of a Palestinian house in Rafah, in the Gaza Strip. On Friday, her parents and the foundation that bears her name reminded us all of her courage. Commemorations were also held in Gaza, where Vittorio Arrigoni will also be remembered in a month’s time, six years after he was brutally murdered.

So many things have changed in Gaza — and all for the worse — compared with January 2003, when the young American woman left for Rafah. These were terrible months, with the Israeli army committed to demolishing hundreds of homes along the border between Gaza and Egypt during the Second Palestinian Intifada. Death, blood and destruction were the order of the day, but there was no way to tell that just a few years later, Gaza would become a de facto open-air prison, controlled by Israel and Egypt, in which over two million Palestinians are now forced to live.

Even in those tragic moments in 2003, few could imagine that there would be three major Israeli military offensives against Gaza in just eight years — in 2008, 2012 and 2014 — which killed thousands of Palestinians, and, even more, that the Strip would become a battleground in the conflict between the two main Palestinian movements, Fatah and Hamas.

Rachel did not think of herself just as a “human shield”. Most of all, she wanted to document the shootings of civilians, the deliberate destruction of infrastructure and the abuses of all kinds by the Israelis. And she wrote a lot, informing her family, her friends and other activists about what she saw every day, and telling about her emotions and her sense of helplessness before the events.

Her death came on March 16. Together with six other ISM activists, she formed a line in front of the Israeli bulldozers which were ready to advance and destroy several Palestinian houses, including the home of a friend of hers. She was wearing a fluorescent jacket. As she had done on other occasions, she climbed a mound of earth that was in front of one of the bulldozers so that the operator of the machine would see her and have to stop. Suddenly, she fell—perhaps because of the bulldozer pushing against the mound under her, although no one can be certain. She ended up under the machine’s tracks.

Witnesses said that after she was buried under the earth, the military vehicle passed over her a second time. In the following months, the Israeli army disclaimed any responsibility for what happened to Rachel and any other demonstrators. A Haifa court later ruled that the bulldozer driver did not see the American girl, “who should have stayed away from the danger zone,” and that her death was “the result of an accident that she had brought upon herself.” This version of events has been categorically denied by the comrades of the young activist.

But Corrie did get some of the justice she was due from global civil society, who have made her a symbol of non-violent resistance and the struggle for justice. Her diaries have been adapted into a play, My Name is Rachel Corrie, by the British actor and director Alan Rickman, which is being staged nowadays all over the world. Nena News