Palestinian unity may not survive fallout from Israeli youth murders

Both the Palestinian Authority and Hamas leaders are warning the reconciliation deal might collapse, as pressure from Israel mounts after the death of three Israeli teen settlers. 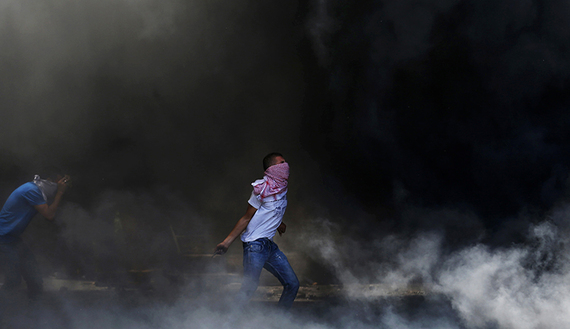 A Palestinian prepares to hurl a stone as he stands in a cloud of smoke from tyres set ablaze during clashes with Israeli police in Shuafat, an Arab suburb of Jerusalem July 2, 2014.(photo by REUTERS/Baz Ratner. Source: al Monitor)

Roma, 3 luglio 2014, Nena News – Palestinians fear that the results of the Hebron operation might affect the future of the reconciliation, with Israel pressuring the Palestinian Authority (PA) to renounce the agreement with Hamas. The operation appears to be a direct result of the consensus government, which was declared on June 2, with both Fatah and Hamas officials warning of unilateral steps that may undo the reconciliation deal.

The comment posted by Mousa Abu Marzouk, deputy head of Hamas’ political bureau, on his Facebook page on June 29 surprised the Palestinians and highlighted bleak expectations for the future of the reconciliation. Abu Marzouk wrote: “Hamas may again rule the Gaza Strip to preserve the security of its people, since a vacuum is unacceptable. The [Gaza] Strip is no longer the responsibility of the previous government, and there is no consensus government. The Gaza Strip is first and foremost under siege from the [Palestinian] Authority. Was the reconciliation torn apart?”

A Palestinian security official told the London-based Al Hayat newspaper: “If it is proven that Hamas abducted [and murdered] the settlers, this will leave a significant impact on the reconciliation. The PA will put its implementation on hold and will freeze it until things become clearer.”

Palestinian media circulated the minutes of the PLO Executive Committee meeting on June 15 in Ramallah, headed by President Mahmoud Abbas. During the meeting, Abbas said, “If it is proven that Hamas kidnapped [and killed] the settlers, we will have a position on the reconciliation.”

One of the meeting’s participants told Al-Monitor over the phone, “Abbas hinted that his expected choices include the dissolution of the consensus government under Israeli and US pressure, since he believes that the Hebron operation was the coup de grace that put an end to the reconciliation. Therefore, he wants to send messages that release him from this responsibility and throw the ball in Hamas’ court in front of Israel and the United States.”

The official stressed that Abbas recalled the statement of Israeli Prime Minister Benjamin Netanyahu, who stated that by allying with Hamas the PA would be liable for the murder of the teen settlers, and called for the PA to renounce the reconciliation as a sign of condemnation of the operation.

“During the meeting, Abbas seemed to be concerned for his political project, fearing Israel will opt for a major escalation in the West Bank. Abbas does not want a repeat of the siege suffered by Arafat in late 2004, and he received threats from Israel that this scenario will be repeated if he fails to put an end to the reconciliation with Hamas,” the official said.

Palestinian concerns over the future of the reconciliation were perhaps increased when Foreign Minister Riyad al-Maliki warned the “reconciliation agreement would be endangered” if Hamas were found to be behind the kidnapping and murder of the three Israeli settlers.

This pushed Hamas spokesman Sami Abu Zuhri to denounce and refuse Maliki’s threats, as they “reflect his suspicious positions.” Zuhri defended “the policy of kidnapping and killing soldiers and settlers,” saying, “It is not an accusation, but rather a source of pride for the Palestinians.”

Moreover, Yahya al-Abadsah, chairman of the Legislative Council’s oversight committee, attacked Abbas for having “placed himself in confrontation with all the Palestinian people and neglected the blood of the martyrs and the suffering of the prisoners.” According to Abadsah, Abbas “only cares about protecting himself, since he defended the security coordination, which represented a coup against the legacy of the Palestinian national movement.”

Al-Monitor obtained a position assessment paper circulating among high-level Hamas circles, which stated that “Hamas’ prevailing impression is that Abbas wants it to bear the entire consequences of the reconciliation. This would make Hamas seem as if it had fully surrendered to [the PA] without effective guarantees and as if it waived its legitimate right to head the government in Gaza. Thus, Fatah will again assume power and manage the crossings, and the ‘Fatahization’ program of ministries and institutions will begin, leading to a monopolization of the leadership of the Palestinian scene.”

Al-Monitor also met with a number of senior government officials in the Gaza Strip, who said that the ministers of the consensus government in Ramallah have not communicated with them, do not answer their phone calls and are disregarding them in a humiliating manner. The government officials added that they started making contact with Fatah civil servants who have been refraining from work for seven years now for arranging the internal affairs of the ministries.

A senior official at the Foreign Ministry in Gaza told Al-Monitor, “The shaky reconciliation with Fatah is a message to Hamas and its supporters that they are weak, trapped and forced to conclude this reconciliation, and that they will bear the consequences, since political action is based on the balance of power and the exploitation of opportunities and interests, not on good intentions. This message has been received by Hamas leaders day after day.”

The concerns over the future of the reconciliation raised the ire of grassroots groups. The Intbah campaign expressed “grave fears of unilateral steps in the West Bank and Gaza contrary to the requirements of efforts to end the division and turn the horrible page on security attacks on the Palestinian freedoms and citizens in the West Best and on the closure of banks in Gaza, which indicates the return of a wave of chaos and fighting.”

On the other hand, a Palestinian official in the West Bank told Al-Monitor by phone, “Hamas wants to reap the fruits of reconciliation on the spot, while this requires time. We have incomplete files, such as the Rafah crossing and the return of the Palestinian Legislative Council, to work on to give confidence to the government — especially after the arrest of most of the Hamas members of parliament in Israel’s recent arrest campaign following the murders of the settlers in addition to the restructuring of the PLO.”

“Hamas is requested to have patience and keep its members calm, since seven years of division cannot be solved with the stroke of a pen from the president, and any reaction by Hamas would harm the reconciliation. And Hamas would be liable for this toward the people,” he said.

Within this context, circles close to Abbas announced that he canceled his planned visit to the Gaza Strip after increasing tensions with Hamas following the crisis of salaries, and that Prime Minister Rami Hamdallah declared he has no effective control over Gaza.

Moreover, Hamas leadership circles told Al-Monitor that they want Hamas to insist on a reconciliation based on a genuine desire by Fatah to turn the page on division, in light of PA practices such as the nonpayment of salaries in the Gaza Strip and the prosecution of Hamas supporters in the West Bank after the Hebron operation.

Furthermore, Quds Press news agency announced the start of consultations between the factions in Gaza and abroad about the future of the Gaza Strip if the consensus government fails. The agency also announced that the factions are searching for suitable alternatives for the Gaza administration, in light of the increasing government failure and its noncompletion of reconciliation files.

One of the participants in the consultations told Al-Monitor that a number of future options were raised such as forming an administrative committee to run the affairs of the Palestinians in the Gaza Strip instead of the paralyzed consensus government, and calling for the formation of a government of technocrats with the participation of businessmen, academics and experts. The options included a gradual withdrawal of Hamas from the management of the affairs of the Gaza Strip in terms of security and government departments. This would be a preliminary action that leads the Gaza Strip into chaos, to put pressure on the PA and Israel for the implementation of a genuine — and not only formal — reconciliation. Nena News