Israel has used the Lgbtq community as a tool to “pinkwash” its colonial policies against Palestinians.  Palestinian Lgbtq organizations refuse to be associated with it 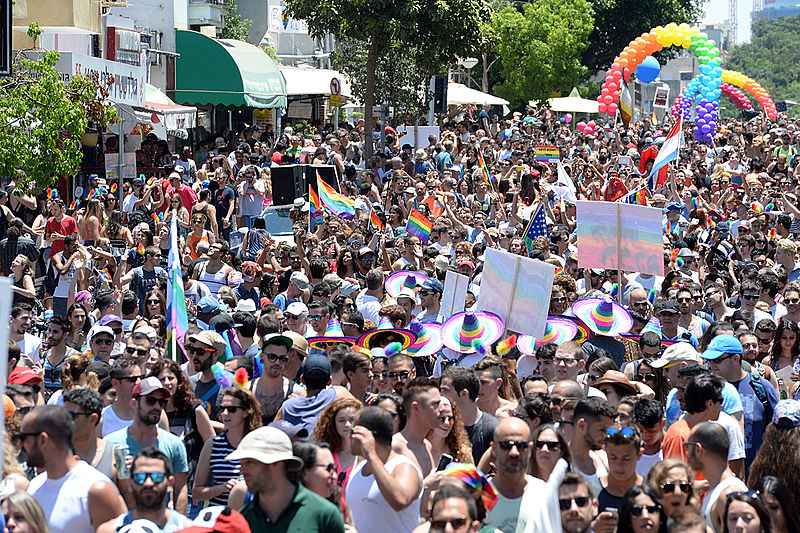 Rome, 20th of July 2020, Nena News – Israel is the best PR state in the world.  To be honest, it has been exceptional at selling itself since its inception, and its amazing PR skills and knack for politicking date back to the 1919 Paris Peace Conference after World War I, when a Zionist delegation lobbied for a Jewish state in Palestine.

Israel is also uniquely able of putting up a mask and making itself look better than it is while making Palestinians look worse than they are; it succeeds in doing so through news stories and in film by using innumerous orientalist stereotypes. It has managed to project the image of it being a bastion of democracy, while perpetrating ethnic cleansing and human rights abuses against Palestinians. This has been possible because Israel understands the value of using all sorts of ammunition, both live and emotional, to advance its interests.

One of its most valuable PR weapons has long been the LGBTQ (lesbian, gay, bisexual, transgender, queer) rights cause, which it uses to promote itself and “pinkwash” its crimes, just as it successfully manages to whitewash the occupation and ethnic cleansing of Palestine. Picking just one cause from the broad spectrum of human rights is nothing but hypocritical and dishonest.

LGBTQ promotion by Israel is part of a broader campaign to rebrand itself. It developed and perfected its campaign, over time, with the aim to erase, eradicate, and dilute solidarity with the Palestinian cause by projecting the age-old narrative of the Jewish people as being the ‘woke’, civilized and modern people that helped turn the desert into a garden.  This is just one of many myths, when in reality we know that Zionist tropes have long been debunked and Israel is not the modern enlightened democracy that it claims to be.

The truth is that Israel has long invested in the large-scale Brand Israel campaign, which started in the early 2000s, and was produced by the Israeli foreign ministry to counter the country’s growing negative reputation as an imperial aggressor. Regrettably, Israel has deliberately used the LGBTQ community as a tool to “pinkwash” its colonial policies against Palestinians, knowing that LGBTQ rights now garner widespread support and where the political empowerment of LGBTQ communities is seen as a key requisite for being considered as a highly modern, developed, and most importantly, democratic country.

Israel has calculatingly chosen to use the LGBTQ movement as cover for its human rights violations against Palestinians.  It realized a long time ago that this would be a good strategy to project a positive image to the world, while distracting from the ongoing occupation of Palestine. Israel has exploited the LGBTQ agenda for propaganda reasons every time its ‘clean’ image is dealt a blow.

At this delicate historical moment, when Israel plans to annex even more Palestinian territory in the West Bank, Israel is using any story it can to spin the narrative in its favor by promoting images of an Israel that appeals to the West; such as being more progressive than the Palestinians and in this case, being a LGBTQ paradise albeit at the expense of Palestinian liberation.

It is ironic that Israel chooses this as one of its most powerful tools, while in reality it denies the homophobic oppression of its own LGBTQ community which is routinely attacked by Orthodox Jews and where same sex marriages are illegal in the country.

The latest story that Israel has used to vilify the Palestinians, and to frame them in the usual stereotypical way – an orientalist, simplistic manner that seeks to justify their superiority over Palestinians and project a positive message about itself  – has to do with food. It is a simple story that has been highly politicized and that has sparked heated debate – and even triggered a boycott of the famous tahina company, the Al-Arz Palestinian-owned company in Israel.

The company announced that it would start funding a hotline to provide support for LGBTQ Arab Israelis (in other words, Palestinians).  However, the company chose to collaborate with an Israeli group called Aguda, which operates for the LGBTQ in Israel. Although it could have seemed like the most logical thing to do, it was not.  Arab Israelis hold that the LGBTQ movement in Israel has been used as a way to attack traditional Arab society and Arabs in general, while defending and supporting the occupation of Palestine.

Moreover, the movement has been used strategically by the Israeli government to help soften the image of Israel, while it commits human rights violations against Palestinians, LGBTQ or not. For this reason, the Palestinian LGBTQ group Al Qaws has adamantly refused connections with the Israeli LGBTQ movements, refusing to participate in Pride parades in Tel Aviv as they consider the Israeli pinkwashing campaign as a way to uphold and entrench Zionism and colonialism, and not about LGBTQ liberation at all.

Nevertheless, several Arab Israeli groups did come out and support the project launched by the female President of Al-Arz, Julia Zaher, condemning the homophobic backlash from conservative Arab circles while disapproving her decision to fund an Israeli organization given the existence of Arab Israeli LGBTQ groups that could have been supported to do the same job. Arab Israelis saw the support for Aguda as yet another form of pinkwashing, because it implied that LGBTQ organizations did not exist in Palestinian society and it denied the existence of Palestinian LGBTQ organizations.

Although Israel can say it has been a champion of the LGTBQ movement – claiming to be the most democratic state, surrounded by undemocratic and intolerant Arab states – Arab Israeli LGTBQ too have become more and more outspoken and empowered, living their sexuality openly despite disapproval and intolerance from conservative sections of Arab-Israeli society. Israel wants to be considered a strong promoter of human rights by advertising its liberal campaigns for LGBTQ communities; the problem is, you cannot just pick and choose the human rights you deem important, especially when you promote them for Jews only and when you step all over them if related to Arab Israeli rights or human rights in the occupied territories.  That’s not how human rights work.

Although Israel advertises itself for LGBTQ tourism, and since its founding has been sold as the only democracy in the Middle East, all one has to do is travel a few kilometers into the occupied territories to see that life in Tel Aviv is a bubble and sheltered from the reality of an apartheid state. Pride in Tel Aviv, for example, is heavily sponsored by the Israeli government and is cynically used to divert attention from the realities of occupation.

Even though it is now more common than ever to hear of Israel as a settler colonial state founded on ethnic cleansing and dispossession, it needs – more than ever – to present itself as a morally redemptive democracy in order to survive. It needs to do so to survive criticism and scrutiny, and to fight back against powerful and threatening movements such as the BDS (Boycott, divestment and sanctions), which has also been embraced by LGBTQ movements inside and outside of Israel.

There is undoubtedly a long road ahead for Palestinians and Arabs on the LGBTQ cause, as well as for Israeli society (outside the small bubble of Tel Aviv). The fact that Israel is set to have a record number of openly gay MPs, for example, does not make it more of a democracy and less of a human rights abuser or colonialist state for Palestinians, in the same way that Iran does not become more democratic if it gives its transexual citizens the right to have their gender identities recognized by law or allow for sex reassignment (and even subsize the process). Human rights are many and they must all be protected in a true democracy; they are inseparable from each other and come as a full package in a broader fight for human and civil rights for all.

Weaponizing the LGBTQ agenda for national PR reasons does not liberate or do the LGBTQ community any justice.  Their fight is a transnational and global one, and therefore inseparable from the universal fight for equality and justice for all. Nena News