Mamilla cemetery does not exist anymore. What exists now is a hotel, a school, a parking lot, a public garden, a nightclub and the US consulate. Also a museum to celebrate tolerance. But the meaning of tolerance in West Jerusalem, a few steps away from the Old City, is surreal — to build the story of a new Jerusalem, the Israeli authorities are erasing its past. 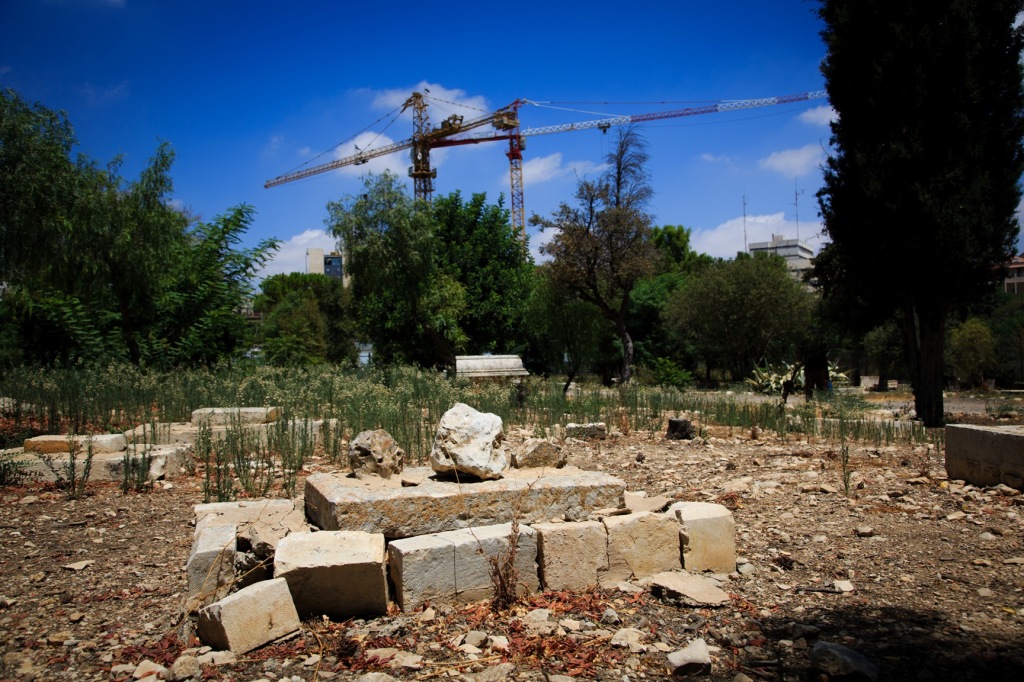 Tombs in the historic Mamilla cemetery in West Jerusalem. In the background the construction site of the Israeli Museum of Tolerance set to open in 2017. (Photo: Pablo Castellani)

Jerusalem, 28th of August 2015, Nena News – Mamilla cemetery does not exist anymore. What exists now is a hotel, a school, a parking lot, a public garden, a nightclub and the US consulate. Also a museum to celebrate tolerance. But the meaning of tolerance in West Jerusalem, a few steps away from the Old City, is surreal — to build the story of a new Jerusalem, the Israeli authorities are erasing its past. Mamilla cemetery is a prominent cornerstone of the Arab, Islamic and Palestinian identity of the city. But today it’s a forgotten place.

Since the creation of the State of Israel, the Israeli government has worked to remove the graveyard from the heart of West Jerusalem. “In 1948, the year of Nakba, the catastrophe of the Palestinian people, the upper part was immediately transformed into a public park, renamed ‘Independence Park’, aimed at celebrating the victory in the ’48 war. They created the garden, uprooting and removing dozens of ancient tombs.” explains Nader Dajani as he walks between what remains of the cemetery of his ancestors. The Dajani family is one of the most ancient and wealthy families in Palestine, several of its members are buried in Mamilla.

“In the Israeli project the only things that deserve to survive in Mamilla are two shrines: one belongs to a famous local scholar, and one to Ahmad Dajani, a well known sheikh. The only reasons behind this decision is the archeological importance of the shrines and also their sizes: it’s easy to remove a small tomb, a stone; it’s harder to uproot a huge one”. 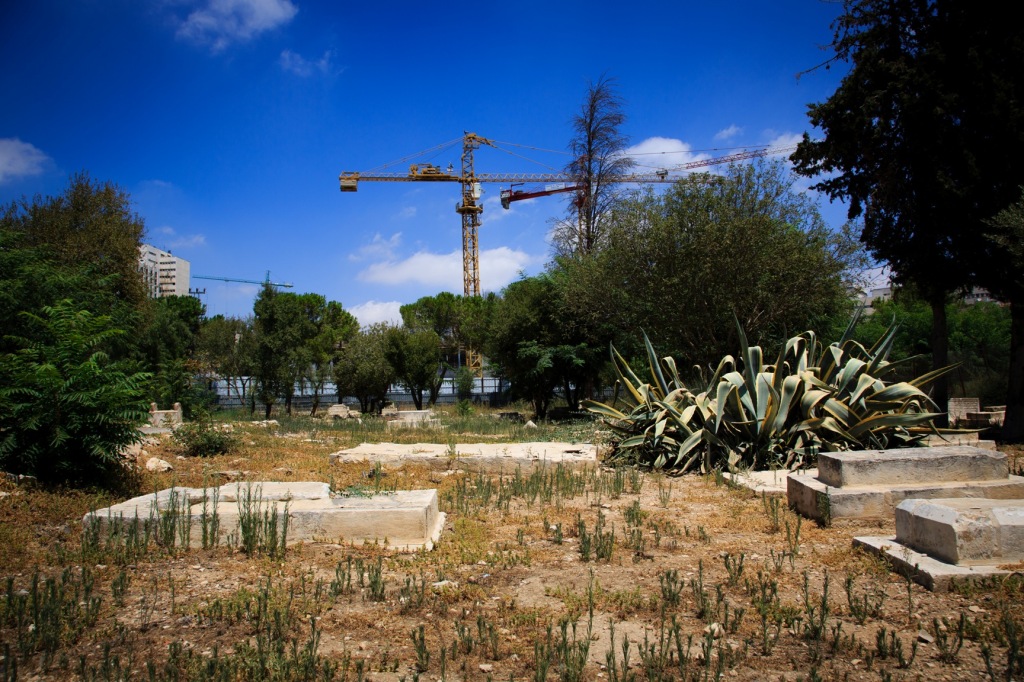 Tombs in the historic cemetery of Mamilla in West Jerusalem, in the background the construction site of the Israeli Museum of Tolerance set to open in 2017. (Photo: Pablo Castellani)

Today, the graveyard has almost disappeared. A few ancient tombstones are relegated into the lower part, covered by grass and trash. It’s not easy to estimate how many gravestones were located there but, according to an investigation by the Israeli newspaper Haaretz, at least 1,500 tombs were removed by bulldozers and the human remains just thrown away. “The Palestinian residents of Jerusalem have to ask the Israeli State for the permission to clean and take care of the cemetery,” Dajani says. “And every time they refuse. If we come and do some work, after a while they destroy what we build to protect the tombs”.

“Even the old pool of the cemetery is abandoned and empty and it will be removed. It’s heartbreaking, this pool was the means in ancient times for the Jerusalemites to distribute water to the city. The water was coming from the Hebron district through a pipe system, collected here and then allocated to the different neighborhoods. Actually the name ‘Mamilla’ originates from that: in ancient Arabic it means ‘water of God’ or ‘benefit from God’. Do you see? They are not just uprooting the gravestone, but also the history of Jerusalem”. 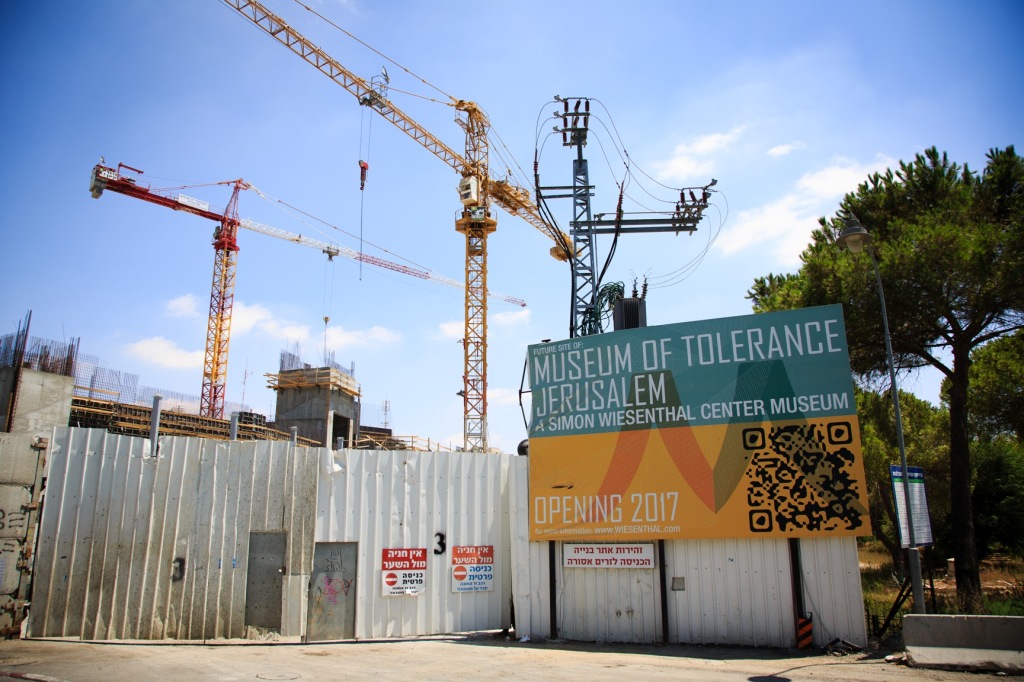 The Israeli Museum of Tolerance is set to open in 2017 and will be build on top of the age-old Mamilla cemetery in Jerusalem’s Old City. According to the Islamic community, some of the Prophet Muhammad’s companions were buried there. (Photo: Pablo Castellani)

Of the 200 dunams (one dunam is 1000 meters square), only 20 still serve as a graveyard. Not for long. Dajani continues, “In July the municipality gave the final green light to a new residential project. The few tombs that survived the destruction, will be removed to give space for a massive complex including 200 apartments, a commercial mall and a 480-room hotel”. The construction of the Museum of Tolerance is still ongoing meanwhile a new pub and nightclub opened one month ago where there had previously been gravestones.

The Israeli project to destroy Mamilla cemetery has deep roots. In 1933 the British Mandate planned the first transformation of the graveyard. Under that project the cemetery was supposed to be divided into four parts: a residential area, a public garden, a commercial area and the remains of the graveyard. This European colonialism laid the foundations for the future Israeli policies: the same project is exactly the one implemented after ’48, when all the public properties owned by the State under the Islamic al-Waqf contracts passed into the hands of the new Israeli Custodian of Absentee Property through the Absentee Law (the Israeli law used to confiscate all the properties owned by Palestinian refugees).

The cemetery was used since the Roman times, until the 7th century when the Persians conquered Jerusalem. In 636 AD it became an Islamic cemetery and it witnessed a bloody massacre during Crusaders time when 17,000 people were brutally killed in the occupation of Jerusalem and laid to rest there. People still say that the prophet Mohammed is buried there; for sure Mamilla is the place of rest for the sahaba, disciples of Mohammed, and later for famous scholars, intellectuals, former governors of Jerusalem. In that way it is a symbolic threat to the biggest Israeli goal of the Judaization of historical Palestine. 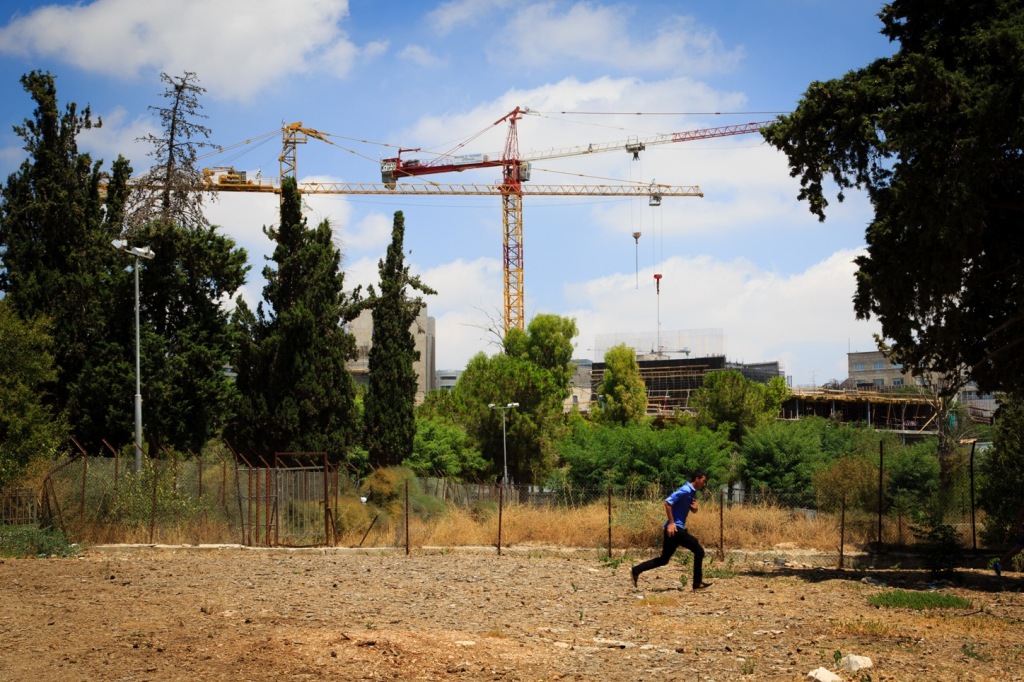 A boy running in the garden next to the cemetery. (Photo: Pablo Castellani)

“The current municipality has the aim to transform Jerusalem into an open air gallery, on behalf of international tourism,” says Sergio Yahni, an Israeli journalist and coordinator of the Palestinian-Israeli organization the Alternative Information Center. Yahni continues, “To reach this goal, it’s erasing the Islamic history and tradition of the city. Jerusalem is built on multiple layers, a unique stage of history, but the municipality is working hard to simplify it. How? Erasing the Islamic layer in order to replace it with the Roman and the Jewish ones”.

“The huge project that is going on in Mamilla is business: they are commercializing the city, selling it as a modern Jewish city, but at the same time as an ancient one. The mayor, Nir Barkat, wants to sell Jerusalem to the world as an opulent tourist attraction, because of this, he is transforming its character and the nature. Who is the victim? The Arab history of the city”.

One of the tools Israel is using to do this is archeology. For decades Israel has used it to justify its policies on the ground. “The scientific archeology was replaced by the ideological archeology: all the Israeli work in this field is based on the Bible and the Old Testament, trying to demonstrate their narrative,” Yahni explains. “And obviously, in this context, there is no space for the Islamic and Arab tradition. Let’s take the example of the Moroccan Quarter, in the Old City, just beside the Wailing Wall: it was built in the 12th century and it was destroyed after 1967 because it was contradicting the Zionist narrative. The same thing is happening in Silwan with the City of David and in Mamilla: the archeology is a tool to justify a personal and self-interested narrative, erasing the real one”.

But the Palestinian residents of Jerusalem aren’t giving up. They have been fighting for 30 years through petitions, legal action and support from outside but with little results. In 1986 the first appeal to the UN agency Unesco to save the site failed. In 2006 the Israeli Supreme Court received and then rejected the first complaint by families and human rights organizations to stop the work in the graveyard. This has been followed by several other petitions to UN and UNESCO. But today the disappearance of Mamilla is still ongoing.