The International Federation of Human Rights (FIDH), Human Rights Watch and EuroMed Droits,, have launched an appeal to the French president that he might consider the question of human rights at a time when 380 Egyptian human rights defenders risk prison terms of 25 years to life 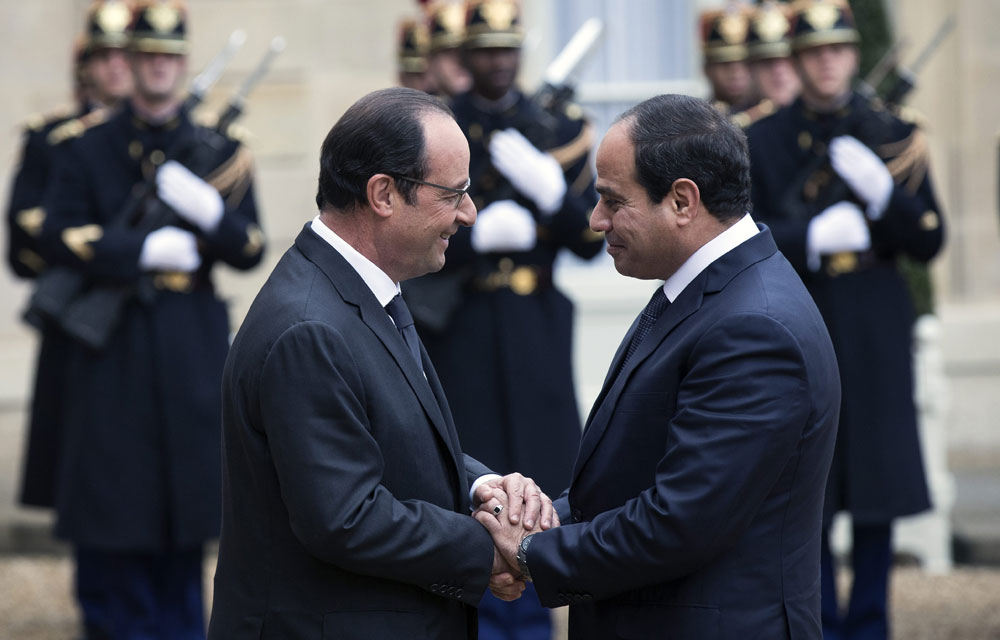 The French ambassador in Cairo, André Parant, said that about 30 contracts are ready to be signed between France and Egypt during the Cairo leg of President François Hollande’s Middle East and North Africa tour this weekend that also stops in Lebanon and Jordan. Hollande arrives in Egypt accompanied by 60 businessmen, with the aim to establish a “strategic partnership” with the regime. In the French view, Egypt is a strategic partner not only for the economy, but also for regional security.

The International Federation of Human Rights (FIDH), Human Rights Watch and EuroMed Droits, however, have launched an appeal to the president that he might consider the question of human rights at a time when 380 human rights defenders risk prison terms of 25 years to life.

The NGOs, which were received by Hollande’s diplomatic adviser on Tuesday, reminded the government of the fate of a Frenchman, Eric Lang, a 49-year-old teacher who was arrested in Cairo for not carrying his passport with him and died in police custody in 2013, beaten to death. The official version from the Egyptian dictatorship is that Lang was beaten to death by fellow inmates, but his family doesn’t believe it. The French Foreign Ministry insists it has “moved to clarify,” but the case has been practically forgotten in France.

Paris remains convinced that the best way to exert some influence over President Abdel Fattah el-Sisi is through secret negotiations (which therefore do not interfere with economic affairs). “We are aware of the commercial strategic interest of relations with Egypt,” said Michel Tubiana, President of EuroMed Droits. “But we are restless: The regime cannot control its own security services.”

Among the major contracts to be signed on April 18 is a telecommunications satellite, built by Airbus and Thales Alenia Space (a Franco-Italian consortium, with 33 percent participation of Finmeccanica), for an amount that could exceed €1 billion. France will sell to Egypt four other warships worth between €500 million and €600 million, naval armament of €300 million to €400 million and in the future a new FREMM frigate. (At the beginning of 2015, Sisi was already sold one FREMM, and of the 24 Dassault Rafale fighter jets sold, six have already been delivered, for a total value of €5.2 billion.

Egypt has also acquired two Mistral warships that France had built for Russia, but whose delivery had been canceled because of the embargo over Ukraine. In this case, it was Saudi Arabia that likely paid for it, but the maneuver remains secret, and no one knows what Paris asked for — in financial as well as political terms.

Among the big arms dealers, there is concern about Egypt’s ability to pay. France, the sixth-largest supplier, also has in its sights a big telecom contract with Orange. Amnesty International reports that Sherpa military vehicles, a product of France, are being used by the regime to repress citizens. It maintains opaque trade in ammunition and anti-riot materials made in France.