The U.S. government continues to turn a blind eye to the medieval forms of torture meted out by its Saudi allies 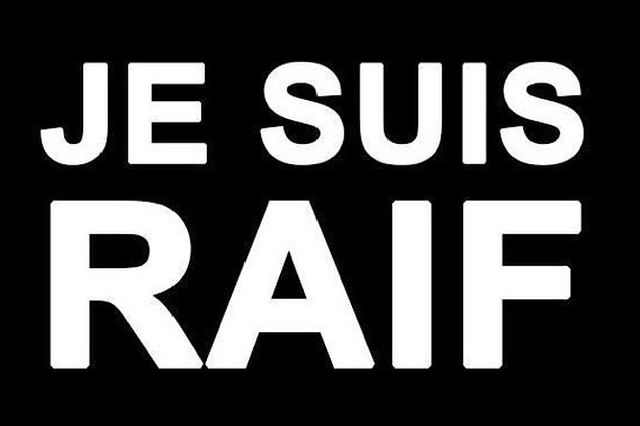 January 16, Nena News – On January 9, two days after the massive Paris march condemning the brutal attack on freedom of the press, a young Saudi prisoner named Raif Badawi was removed from his cell in shackles and taken to a public square in Jeddah. There he was flogged 50 times before hundreds of spectators who had just finished midday prayers. The 50 lashes—labeled by Amnesty International a “vicious act of cruelty”—was the first installment on his sentence of 1,000 floggings, as well as ten years in prison and a fine of $266,000. Badawi’s crime? Blogging.

The father of three young children, Badawi hosted the website known as Free Saudi Liberals, a forum intended to promote a lively exchange of ideas among Saudis. Badawi wrote about the advantages of separating religion and state, asserting that secularism was “the practical solution to lift countries (including ours) out of the third world and into the first world.” He accused Saudi clerics and the government of distorting Islam to promote authoritarianism. Unlike the Saudi rulers, Badawi cheered the Egyptian uprising against Hosni Mubarak, calling it a decisive turning point not only for Egypt but “everywhere that is governed by the Arab mentality of dictatorship.”

In mid-2012, Badawi was arrested for his blogs, including an article in which he was accused of ridiculing the kingdom’s religious police, the Commission for the Promotion of Virtue and Prevention of Vice. He was also charged for failing to remove “offensive posts” written by others. The prosecution originally called for him to be tried for “apostasy”, or abandoning his religion, which carries the death penalty.

If nothing changes, Raif Badawi will be flogged every Friday for the next 19 weeks. And he will not see his wife or children for ten years, who were forced to flee to Canada to avoid public harassment at home.

Badawi’s case is not unique. In 2014, Reporters Without Borders describes the government as “relentless in its censorship of the Saudi media and the Internet”, and ranked Saudi Arabia 164th out of 180 countries for freedom of the press.

Last year, four members of the group Saudi Civil and Political Rights Association, an organization documenting human rights abuses and calling for democratic reform, were sentenced to prison terms ranging from 4 to 10 years. The fourth member sentenced was Omar al-Saeed, who was handed four years in prison and 300 lashes because he called for a constitutional monarchy.

Or look at the case of another human rights lawyer, Walid Abu al-Khair, in prison since 2012. Just this week, on January 13, a Saudi court increased his prison term from 10 to 15 years after he refused to show remorse or recognize the court that handed down his original 10-year term for sedition. Al-Khair, founder of Monitor of Human Rights in Saudi Arabia (MHRSA) and legal counsel for blogger Badawi, was convicted on charges of disrespecting King Abdullah and the Saudi authorities.

Saudi Arabia also remains the only country in the world to maintain a ban on women drivers. According to this law, women are strictly restricted to the passenger seat of vehicles. This ban is so harshly imposed that two women, 25-year-old Loujain al-Hathloul and 33-year-old Maysa al-Amoudi, were not only arrested for driving to the United Arab Emirates, but they were also referred to be tried by a terrorism court. In the past, punishments for women drivers have included loss of jobs, passport revocation, and even floggings.

The US government’s response to these egregious and inhumane punishments from its ally usually takes the form of a US State Department spokesperson expressing “concern.” But there is no major public condemnation. No threats of cutting arms sales. No sanctions against government officials. The US government basically turns a blind eye to the medieval forms of torture the Saudis still mete out.

With the money it receives from oil, the Saudi government purchases vast amounts of weaponry from the United States. In 2010, the US government announced it has concluded a deal to sell $60 billion of military aircraft to Saudi Arabia—the largest US arms sale deal in history. One use of US tanks was seen in Bahrain, where the Saudis intervened to crush a democratic uprising against the Bahraini monarchy.

There’s now Congressional legislation being introduced to declassify a 28-page section of the 9/11 Senate report which allegedly exposes the direct role of the Saudi government in the Twin Tower attacks on 9/11. After all, Saudi Arabia supplied 15 out of the 19 9/11 hijackers and was the home of Osama bin Laden. Saudi Arabia exports the radical version of Islam, Wahhabism, that fuels extremism throughout the Middle East. Saudi Arabia treats its women as second-class citizens. Saudi Arabia is the capital of beheadings, with the government carrying out 87 public beheadings in 2014 and nine already this year.

Being the world’s top oil provider does not give a country the right to dehumanize its own people. The US is certainly no model for respecting freedom of expression – as we saw in the streets of Ferguson where peaceful protesters were teargassed and beaten – but it shouldn’t overlook the human rights abuses carried out by a country that imprisons, tortures and executes its citizens simply for speaking their minds. This Friday, when Raif will once again be subjected to 50 lashes, take a moment to call the Saudi Embassy in Washington DC (202-342-3800, then press “3” for the Public Affairs office) and tell them “Free speech is not, and should never be, a punishable crime. Je suis Raif!”. Nena News
* Medea Benjamin is the co-founder of the peace group CODEPINK and the human rights organization Global Exchange. She is the author of Drone Warfare: Killing by Remote Control.