Pragmatic engagement, not principles, likely to be the order of the day in dealings with Cairo for foreseeable future 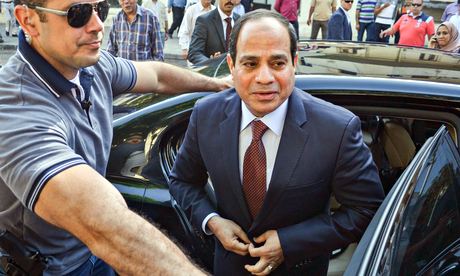 Abdel Fatah al-Sisi at Cairo polling station to cast his vote in the Egyptian presidential election (Source: The Guardian)

Roma, 28 maggio 2014, Nena News – Western governments will have to come up with some tortuous language when Abdel Fatah al-Sisi becomes Egypt‘s president. No one doubts that the former field marshal will win this week’s election by a handsome margin, thanks to a combination of genuine support, boycotts by Islamists who have been banned and persecuted, and the absence of credible rivals. Victory is no less assured than it is for Bashar al-Assad, facing his date with Syria’s destiny next month – though that exercise has been widely condemned as a parody of democracy.

Washington, London and Brussels are already finalising carefully-crafted statements about the will of the Egyptian people and pressing forward with the promised “democratic transition”. There will be euphemistic calls for “inclusiveness” and widening the country’s “political space”. There may even be some critical words about justice and human rights. But there will be congratulations for Egypt’s new strongman.

Behind these circumlocutions and evasions lie the unmistakable reality that this republican coronation puts an end to the hopes that were generated by the biggest upheaval of the Arab spring. Sisi is able to claim the mantle of Gamal Abdel-Nasser and other soldiers-turned-presidents because he and his fellow generals removed the democratically-elected Mohamed Morsi last summer in a move that was undoubtedly popular but was still a coup by any definition.

The US never used that C-word, because under congressional rules it would have meant an automatic cut-off of aid. Britain fretted about the dangers of military “intervention” and hoped for better times. For a few weeks there was a slight chill in relations with Cairo. EU aid and UK arms export licences were suspended. US military aid was frozen, though some sales resumed when Russia stepped in to fill the gap in the market.

Ambassadors who had embraced the Muslim Brotherhood uncritically during Morsi’s unhappy year in office – to the fury of Egyptians who loathed him – accepted that things had changed overnight. Business as usual did include condemnation of repression under the military – 1,000 people killed and many thousands imprisoned could hardly be ignored. The outlawing of the Brotherhood, mass trials and death sentences and a media crackdown have drawn fire too. Still, the announcement of a UK investigation into the Brotherhood and Tony Blair’s warm endorsement of Sisi sent very different messages about Egypt’s lurch back to pre-2011 authoritarianism.

In private, western government ministers and officials admit that Sisi’s “road-map” cannot include the aspirations that accompanied the fall of Hosni Mubarak. But in the battle between interests and values, interests win hands down: these include fighting jihadis in Sinai, keeping the peace with Israel, and economics. The UK is Egypt’s biggest source of foreign direct investment. Huge Egyptian debts to British companies are unlikely to be paid if London is at loggerheads with Cairo for the foreseeable future. The US defence industry needs pragmatic engagement, not principles. Counter-terrorism may turn out be Sisi’s trump card – just as it was for Mubarak.

The Muslim Brotherhood has been at the forefront of the campaign against Sisi, but Islamists are not alone in fearing for Egypt’s future. The now-outlawed secular April 6 movement, in the vanguard of the 2011 revolution, appealed to the EU not to send observers to grant the election a spurious legitimacy. After some dithering, the mission went ahead.

“Even if every ballot box is perfectly pristine and voter turnout more than middling, the grim backdrop … means the observation mission can hardly claim it was a free and fair exercise,” commented Fatima Ayub of the European Council on Foreign Relations thinktank. “Neither can the final report assert the ugly truth – that the election is a limp punchline to a bad joke – without begging the question of why the EU made itself a midwife to the rebirth of autocracy in a neighbourhood where it had ostensibly committed itself to supporting new democracies.”

Normalisation will be the order of the day for Egypt’s new era: “It’s a question of holding your nose but being prepared to engage with them so that you can influence the direction of travel,” argues one former Cairo-based diplomat.

“Sisi is going to win and Egypt is an important country. You can either say ‘we’re not going to talk to you’ or you can say ‘we are going to get with on with dealing with the world as we find it.'” Nena News