Doomed from the start

Arab and international meetings designed to push forward the Palestinian-Israeli peace process have little, if any, chance of success, writes Dina Ezzat 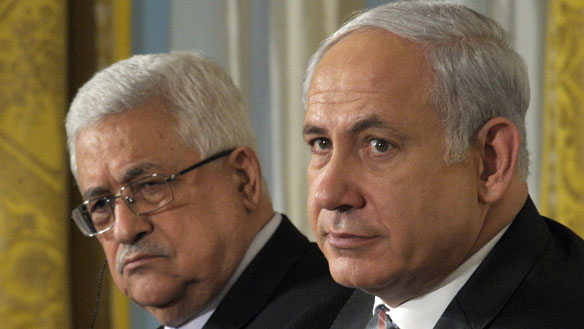 Il Cairo, 3th of June 2016, Nena News – Delegates from 20 countries began arriving in Paris on 1 June to explore ways to push forward long-stalled Palestinian-Israeli negotiations. As Al-Ahram Weekly went to press, informed diplomats said all 20 countries and organisations invited by France had confirmed their participation in what Paris hopes will be a pre-Middle East summit meeting at foreign minister level on 3 June. They include the foreign ministers of Saudi Arabia and the United Arab Emirates. Diplomats say both countries are supportive of the French initiative.

While neither the Palestinians nor the Israelis will take part in the talks a high-level Palestinian delegation is expected to be in Paris for the duration of the conference. Israel has turned down French Prime Minister Manuel Valls’ request that it support the initiative and there are no signs Israeli Prime Minister Binyamin Netanyahu will change his mind. Any consultations with the Israeli side will have to be conducted by telephone or through the Israeli Embassy in Paris.

“No one is putting pressure on Israel to engage — not the Europeans, not the Arabs and certainly not the Americans. Washington could not be more disengaged. US Secretary of State John Kerry will make it to Paris, but only to send Netanyahu a message of clear discontent over his choice of Avigdor Lieberman as minister of defence,” said a Palestinian diplomat.

The swearing in as minister of defence of ultra-rightist Lieberman fanned fears in many world capitals about the direction the Netanyahu-Lieberman coalition will take. “We think it is very disturbing. Our concern is compounded by the fact there is very little serious political will in most concerned capitals to take the actions necessary to remind Lieberman and Netanyahu that the world will not accept any mad actions,” said a northern European diplomat. “We cannot talk about a firm stance from the international community against Israel,” she said, adding that because of this the most important thing now is to show support for the Palestinians.

Palestinian leader Mahmoud Abbas might possibly meet with French President François Hollande ahead of 3 June, according to the Palestinian diplomat. “We are not hoping for much out of the Paris meeting, and even less from the Israeli government, which had no qualms about shrugging off the French initiative even during French Prime Minister Manuel Valls’ visit to the region last week. Even so, we are determined to be as positive as possible,” he said.

On Saturday the Arab League announced its support for the French initiative. “Abbas was reluctant to engage because he knows it has few chances of picking up, but with collective Arab support he adopted a positive stance,” said an Arab League source. He added that Arab support for the Paris initiative is inspired by a wish to re-establish the position of the Palestinian issue on the agenda of international diplomacy. “The Palestinians have been all but forgotten in leading world capitals. For the world now the Middle East is all about IS [the Islamic State group] and the refugee crisis.”

A resolution adopted at the Cairo headquarters of the pan-Arab organisation expressed hope that the Paris meeting might open the way for an international summit on Palestine. Paris had been hoping its proposed summit would take place on the sidelines of the UN General Assembly in New York during the last week of September at the latest. Those hopes have now been dampened to the point of extinction by Netanyahu’s attitude to his French counterpart last week and by the inclusion of Lieberman in his government.

This lowering of expectations is why the resolution adopted by Arab foreign ministers in Cairo last week expressed support for “other Arab and international efforts” to find a settlement to the Palestinian issue alongside the French initiative, according to the Arab League source.

“Yes, this means equal support for the Egyptian effort to mediate between the Palestinians and Israelis, though honestly we don’t think that this will work either. Israel is not willing to accept any talk about a [viable] Palestinian state. They may agree to an extended Palestinian Authority but this is the maximum Israel’s current government will give,” said the Arab League source.

This week, Israel adopted a new set of measures to reduce the presence of Arab Israeli citizens in Jerusalem, confiscating their residence permits or simply expelling them. “They are making random and unqualified accusations against Arab Israelis living in Jerusalem against the backdrop of recent outbursts of Palestinian anger in the West Bank. It is part of the Israeli government’s ongoing of creating new realities on the ground, and let the world decry and denounce all it wants,” said the Palestinian diplomat.

“I think the status quo on both the inter-Palestinian and the Palestinian-Israeli fronts is likely to persist for a long time. Yet we must still try and shake the stagnation. And that, basically, is what everyone is trying to do,” he said.

One possible outcome of diplomatic activities designed to resume Palestinian-Israeli peace talks might be a more open Arab-Israeli engagement, he added, including delegations from Arab Gulf countries attending meetings with their Israeli counterparts. “Yet even these meetings will not prompt Israel to be less intransigent. As far as the Israelis are concerned closer rapprochement with the Arabs is all about the Saudi wish to create a front against Iran, not to help find a settlement for the Palestinian issue,” said the Arab League source.