Haytham Khalayleh, a Palestinian citizen of Israel, was one of the three finalists of “Arab Idol” and though he did not win the singing contest, it provided an opportunity to break through the isolation Palestinians with Israeli citizenship have faced since 1948. 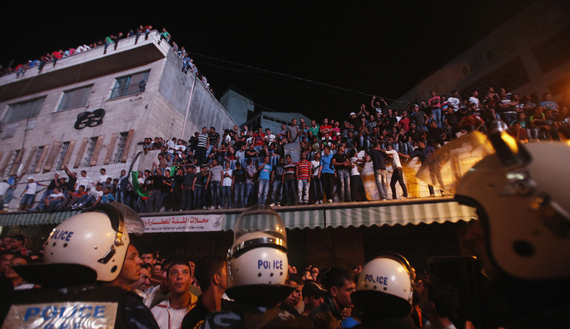 Roma, 16 dicembre 2014, Nena News – Palestinians of the village of Majd al-Krum were glued to their TV sets Dec. 13. One of the villagers, Haytham Khalayleh, was a finalist in the most popular TV show in the region — “Arab Idol.” The interest of a community in stardom of one of their own is not unusual, but the situation of Majd al-Krum is unique. This Palestinian village in the Galilee is part of the State of Israel and its entire population holds Israeli passports and participates in Israeli elections.

Khalayleh and fellow contestant Manal Musa participated in “Arab Idol” and reached the MBC studios in Beirut thanks to the assistance of the Palestinian government in Ramallah. Palestinian passports were issued to the two Israeli citizens, which allowed them to enter Lebanon and compete in the singing contest.

Makbula Nassar, a Palestinian activist from the Galilee town of Arabba al-Batouf, told Al-Monitor that by appearing on the leading Arab talent show every week for over three months, the Palestinian contestants set a record. “They broke decades of isolation and allowed us Palestinians to connect with our natural Arab surroundings,” she said.

Barhoum Jarisa, a cultural critic, agreed to the importance of the event, but insisted in an interview with Al-Monitor that every period has its accomplishments. “Politicians had their achievements, TV and cinema talents had their day in the sun and now in the age of the Internet and social media, Haytham and Manal were able to make a breakthrough,” he said. Jarisa recalled iconic figures such as poets Mahmoud Darwish and Samih Qassem, as well as writer Emile Habibi and film directors Elia Suleiman, Hany Abu-Assad and Michel Khleifi as some Palestinian talent with Israeli citizenship.

Nassar argued that the majority of talented Palestinians from Israel made it big in Europe, not the Arab world. “In the Emirates, our poets were called Israelis and disqualified. In Egypt film directors were not allowed to compete for prizes because they were Israelis. This is the first time that Palestinians from Israel appeared alongside Arab talent and were given the respect they deserve,” she said.

Both Nassar and Jarisa credit the 1993 Oslo Accord for the initial break in the isolation felt by Palestinians who chose to stay in their homes during the 1948 Nakba when the State of Israel was created. Nassar remembers busloads of Palestinians from the Galilee going to the West Bank, and even some going as far as the Gaza Strip for vacations.

Soon thereafter in October 1994, Jordan signed its peace treaty with Israel and became a mecca for many Israelis, including political leaders, college students and talented artists. Hundreds of Palestinians who are citizens of Israel received scholarships after Arab members of Knesset asked the Jordanians to provide university places for them. Hotels and tourism sites hosted Palestinian citizens of Israel, who are often referred to as 1948 Arabs, as a reference to the date that Israel was established.

Despite these developements, the average Arab citizen had little information about those Palestinians who had remained steadfast in their villages and towns in what is now Israel. Until “Arab Idol.”

Last year, “Arab Idol” helped Palestinians break the Gaza isolation and turned Mohammad Assaf into a household name. But this year, the constant coverage of “Arab Idol” has done more to introduce Palestinians living in Israel than any politician could ever have.

Khalayleh didn’t win the top prize; he was one of three finalists. The ultimate prize this year went to another talented Arab who lives in a troubled land. Hazem Sharif from Aleppo was crowned, but unlike Assaf’s victory, which was accompanied by the iconic kaffiyeh and the Palestinian flag, Sharif didn’t wave any flag so as not to anger those on either side of the conflict in Syria. But he sang his victory song for all of Syria.

Nassar, who has been researching abandoned Palestinian villages in Israel, told Al-Monitor that over the years she has seen so much talent gone to waste because of the isolation of Palestinian citizens of Israel. “I now hope Arabs will be able to differentiate between Israeli Jews and Palestinian Arabs, irrespective of the passport we are forced to carry,” she said.

Palestinian citizens of Israel face a difficult challenge. They have held on to their Arabic language, culture and Palestinian identity, even when the Arab world has turned its back on them. Now with the 2 million Palestinians holding Israeli citizenship getting a new Arab identity push, the sky is the limit as far as the goals they can accomplish at home or in the wider Arab world. Nena News