What is behind the Hamas-Fatah Reconciliation?

Hamas-Fatah reconciliation is giving Egyptian President Abdel Fattah el-Sisi a window of opportunity to rebrand his country’s image which has been tarnished by brutal crackdowns on his country’s opposition and his miscalculated military interventions in Libya, Yemen and elsewhere 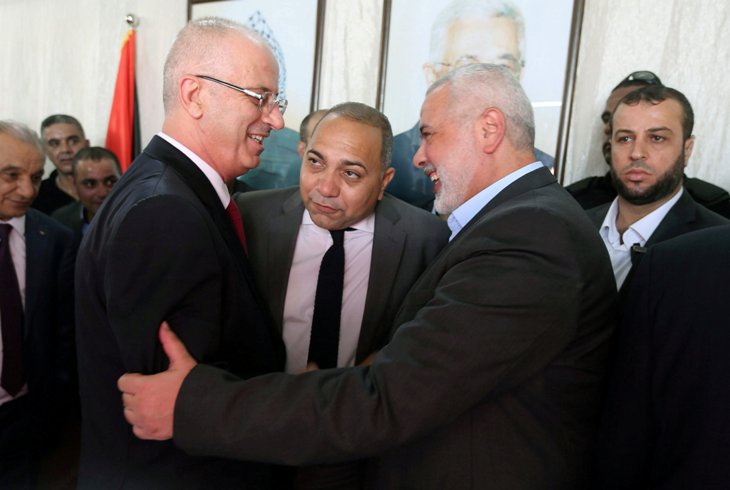 By Ramzy Baroud – The Palestine Chronicle

Ramallah, 13th of October 2017, Nena News – Egypt’s enthusiasm to arbitrate between feuding Palestinian factions, Hamas and Fatah, is not the outcome of a sudden awakening of conscience. Cairo has, in fact, played a destructive role in manipulating Palestinian division to its favor, while keeping the Rafah border crossing under lock and key.

However, the Egyptian leadership is clearly operating in coordination with Israel and the United States. While the language emanating from Tel Aviv and Washington is quite guarded regarding the ongoing talks between the two Palestinian parties, if read carefully, their political discourse is not entirely dismissive of the possibility of having Hamas join a unity government under Mahmoud Abbas’ direction.

Israeli Prime Minister Benjamin Netanyahu’s comments in early October validate this assertion. He did not categorically reject a Hamas-Fatah government, but demanded, according to the Times of Israel, that “any future Palestinian government must disband the terror organization’s (Hamas’) armed wing, sever all ties with Iran and recognize the State of Israel.”

Egyptian President, Abdel-Fattah el-Sisi, too, would like to see a weaker Hamas, a marginalized Iran and an agreement that puts Egypt back at the center of Middle East diplomacy.

Under the auspices of the Egyptian dictator, Egypt’s once central role in the region’s affairs has faded into a marginal one.

But the Hamas-Fatah reconciliation is giving el-Sisi a window of opportunity to rebrand his country’s image which has, in recent years, been tarnished by brutal crackdowns on his country’s opposition and his miscalculated military interventions in Libya, Yemen and elsewhere.

In September, on the sidelines of the United Nations General Assembly conference in New York, el-Sisi met Netanyahu publicly for the first time. The exact nature of their talks was never fully revealed, although media reports pointed that the Egyptian leader has attempted to sway Netanyahu into accepting a Hamas-Fatah unity deal.

In his speech at the UNGA, el-Sisi also made a passionate, impromptu appeal for peace. He spoke of an ‘opportunity’ that must be used to achieve the coveted Middle East peace agreement and called on US President Donald Trump to “write a new page of history of mankind” by taking advantage of that supposed opportunity.

It is difficult to imagine that el-Sisi, with limited influence and sway over Israel and the US, is capable of, single-handedly, creating the needed political environment for reconciliation between Palestinian factions.

Several such attempts have been tried, but failed in the past, most notably in 2011 and in 2014. As early as 2006, though, the George W. Bush Administration forbade any such reconciliation, using threats and withholding of funds to ensure Palestinians remained divided. The Barack Obama Administration followed suit, ensuring Gaza’s isolation and Palestinian division, while it also supported Israel’s policies in this regard.

Unlike previous administrations, Donald Trump has kept expectations regarding the brokering of a peace agreement low. However, from the outset, he took Israel’s side, promised to relocate the US embassy from Tel Aviv to Jerusalem and appointed a hardliner, David Friedman, a Zionist par-excellence, as US ambassador to Israel.

No doubt, last June, Trump signed a temporary order to keep the US embassy in Tel Aviv, disappointing many of his pro-Israel fans, but the move is by no means an indication of a serious change of policies.

“I want to give that (a plan for peace) a shot before I even think about moving the embassy to Jerusalem,” Trump said in a televised interview recently. “If we can make peace between the Palestinians and Israel, I think it’ll lead to ultimate peace in the Middle East, which has to happen.”

Judging by historical precedents, it is quite obvious that Israel and the US have given a green light to Palestinian reconciliation with a clear objective in mind. For its part, Israel wants to see Hamas break away from Iran and abandon armed resistance, while the US wants to get ‘a shot’ at playing politics in the region, with Israeli interests being paramount to any outcome.

Egypt, being the recipient of generous US military aid, is the natural conduit to guide the Hamas-Fatah reconciliation component of the new strategy. What strongly suggests that powerful players are behind the reconciliation efforts is how smooth the entire process has been so far, in complete contrast with years of failed efforts and repeated agreements with disappointing outcomes.

What primarily seemed like another futile round of talks hosted by Egypt, was soon followed by more: first, an initial understanding, followed by a Hamas agreement to dissolve its administrative committee that it formed to manage Gaza’s affairs; then, a successful visit by the National Consensus Government to Gaza and, finally, an endorsement of the terms of national reconciliation by the two most powerful Fatah bodies: The Fatah Revolutionary Council and the Central Committee.

Since Fatah controls the Palestinian Authority (PA), the latter endorsement advocated by Mahmoud Abbas was an important milestone needed to push the process forward, as both Hamas and Fatah readied themselves for more consequential talks in Cairo.

Unlike previous agreements, the current one will allow Hamas to actively participate in the new unity government. Top Hamas official, Salah Bardawil confirmed this in a statement. However, Bardawil also insisted that Hamas will not lay down its arms, and resistance to Israel is not negotiable.

US-Israel-Egyptian power play aside, this is, indeed, the crux of the matter. Understandably, Palestinians are keen to achieve national unity, but that unity must be predicated on principles that are far more important than the self-serving interests of political parties.

Moreover, speaking of – or even achieving – unity without addressing the travesties of the past, and without agreeing on a national liberation strategy for the future in which resistance is the foundation, the Hamas-Fatah unity government will prove as insignificant as all other governments, which operated with no real sovereignty and, at best, questionable popular mandates.

Worse still, if the unity is guided by tacit US support, an Israeli nod and an Egyptian self-serving agenda, one can expect that the outcome would be the furthest possible one from the true aspirations of the Palestinian people, who remain unimpressed by the imprudence of their leaders.

While Israel invested years in maintaining the Palestinian rift, Palestinian factions remained blinded by pitiful personal interests and worthless “control” over a militarily occupied land. It should be made clear that any unity agreement that pays heed to the interest of factions at the expense of the collective good of the Palestinian people is a sham; even if it initially ‘succeeds’, in the long term it will fail, since Palestine is bigger than any individual, faction or a regional power seeking Israel’s validation and US handouts.

Ramzy Baroud is a journalist, author and editor of Palestine Chronicle. His forthcoming book is ‘The Last Earth: A Palestinian Story’ (Pluto Press, London). Baroud has a Ph.D. in Palestine Studies from the University of Exeter and is a Non-Resident Scholar at Orfalea Center for Global and International Studies, University of California Santa Barbara. His website is www.ramzybaroud.net