While Turkey’s parliament has passed an authorization to send troops into Syrian or Iraqi territory, the country’s plans may not dovetail with those of the anti-Islamic State coalition’s. 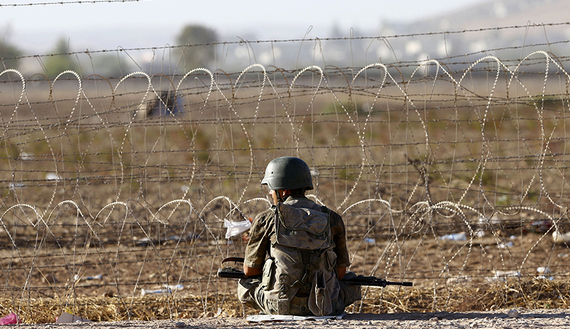 A Turkish soldier sits on the Turkish-Syrian border near the southeastern town of Suruc in Sanliurfa province September 22, 2014. (REUTERS/Murad Sezer. Source: al-Monitor)

Roma, 3 ottobre 2014, Nena News – Unexpected support from the ultra-nationalist and fervently anti-Kurdish Nationalist Movement Party (MHP) authorizing the government to send troops into Syrian or Iraqi territory comforted the President Recep Tayyip Erdogan-Prime Minister Ahmet Davutoglu duo and prevented a repetition of the notorious “March 1 motion” that the Turkish parliament aborted on that day in 2003. The 2003 vote effectively closed all chances the United States had to open a “second front” on the eve of its war against Saddam Hussein’s Iraq.

In 2003, even though the ruling Justice and Development Party (AKP) backed the motion, opposition parties combined with some AKP defections defeated the measure by four votes. While many quarters in Turkey lauded the result as a turning point salvaging Turkey’s foreign policy from being mortgaged to the West and as a source of national pride for the country and the AKP government by bestowing upon Turkey great prestige in the Middle East, the reality was that it caused serious damage to US-Turkey relations that needed a long time to repair. This placed Turkey in a bystander position vis-à-vis developments in its immediate neighborhood.

That wasn’t the case this time. The motion needed a simple parliamentary majority to pass. Although about 50 ruling party legislators were in Saudi Arabia on a pilgrimage, the vote deficiency that could have jeopardized the outcome was offset by equal numbers of the arch-nationalist opposition deputies of the MHP.

The AKP has 312 and the MHP 52 members in parliament. The main opposition Republican People’s Party (CHP) and the pro-Kurdish People’s Democracy Party (HDP), which had announced their decision to vote against the motion, have total of 157. The 14 independent members of parliament also were in no position to play a crucial role in the vote determined by the AKP-MHP combination, which also could be referred to as the Islamists plus the Turkish nationalists’ rightist bloc.

The parliamentary authority that is valid for one year, that is for three months beyond 2015 general elections, has two vital elements:

The motion went sent to parliament immediately after Erdogan’s return from New York, where, according to Turkish media, he came under “US pressure.” This connection could be interpreted by those who don’t follow developments very closely and without access to behind-the-curtain information to mean that Erdogan bowed under American pressure and thus committed Turkey to participate in the US-led coalition against the Islamic State (IS) in Syria.

But this is far from reality. A few hours before the vote in the parliament, at a reception for the inauguration of the legislative year, Erdogan spoke to journalists and emphasized Turkey’s readiness “for any cooperation in the fight against terrorism.” However, as accurately observed by Washington Post correspondent Liz Sly — reporting from the Turkish border village right across from Kobani (Ayn al-Arab) where IS has been mounting attacks against the Kurds — the motion presented by the government to parliament approved a bigger Turkish military role in Syria and Iraq, but not on American terms.

In her report, she wrote that Erdogan “spelled out his reluctance to become embroiled in a military campaign in Syria that does not prioritize the removal of Syrian President Bashar al-Assad and relies on airstrikes to achieve its goals.” Erdogan’s comments suggest Turkey is in no hurry to join the military effort against the Islamic State, despite intensifying US pressure to do so.”

Such an observation was made earlier by an European Turkey expert, a former ambassador of the EU in Ankara, Marc Pierini, who said, “As much as Turkey enjoys the protection of NATO’s Patriot missiles against the Syrian regime, Ankara is perhaps not willing to appear an active member of a war operation against what was initially a Sunni insurgency movement in Syria.”

The resolution authorizes the Turkish government to send troops into Syrian or Iraqi territory but that does not necessarily suggest that the military action is imminent or will ever be taken. Two earlier similar resolutions on Iraq expired without any Turkish military action.

Nevertheless, Turkish officials, in private conversations, do not rule out taking unilateral action in Syria, mainly for the purpose of establishing buffer zones within Syrian territory. This is what lies at the heart of Kurdish suspicions of Turkey’s ulterior motives concerning the situation in Syria and led to vehement Kurdish accusations that Turkey is offering covert aid to IS in its efforts to cleanse the Kurdish population of Syria from areas adjacent to Turkey’s borders.

Turkey’s sitting by idly while Kobani, labeled “Stalingrad of the Kurds,” which has become a symbol for most Kurds in Turkey and Syria, naturally gave credence to the Kurds’ fears and accusations. Even imprisoned Kurdistan Workers Party (PKK) leader Abdullah Ocalan, who has been silent for a long time and whose support for the salvation and survival of the peace process is essential, yesterday released a statement that warned the fall of Kobani would mean the end of the peace process.

The military situation in Kobani aside, the wording of the preamble of the parliamentary authority did not point to the objective of joining the anti-IS coalition but to the existence of a newly escalated PKK threat.

The preamble said: “Risks and threats against our national security along Turkey’s southern land borders have seriously escalated with recent developments. Armed PKK terror elements continue to operate in Iraq’s north. Moreover, significant increases in the number of other terror elements and the threats they pose have been observed in Syria and Iraq.”

Although here the plural used in “other terror elements in Syria” appears to be covering IS, it also covers the PYD, which is identified as PKK-affiliated in the self-rule it has declared in three Syrian Kurdish region locations. The HDP, considered to be the Kurds’ main political representative in Turkey and sharing the same political philosophy and constituency of the PKK and the PYD, therefore voted against the government proposal. Davutoglu said CHP and HDP members who voted against the government motion were declaring themselves “allies of IS.”

He asserted that the HDP, by voting against the government proposal, would forfeit any legitimacy when asking for help for Kobani from the Turkish government.

Such developments involving the vote in the Turkish parliament authorizing the government for the right to “declare war” confirms the following observation from Marc Champion in the National Post: “Erdogan is clearly torn between US pressure to join the military coalition against Islamic State and his own desire to see two adversaries crushed: Syrian President Bashar al-Assad and the Kurdish guerillas running a de facto statelet in northern Syria. Standing by as Islamic State vanquishes fighters from the Kurdish Democratic Union Party, or the PYD, serves one of those goals. His proposal to impose a buffer zone in northern Syria would serve both.”

Hence, it is not surprising to hear from a number of Turkey analysts that Turkey has more to gain by covertly supporting IS, while trying to placate the Americans through various subterfuges.

Following the approval of the government proposal by the parliament thanks to the AKP-MHP votes overcoming the CHP-HDP opposition, these two possibilities could be true: