The hostage crisis in Mosul is the boomerang effect of Ankara’s policy of opening its borders to jihadists. 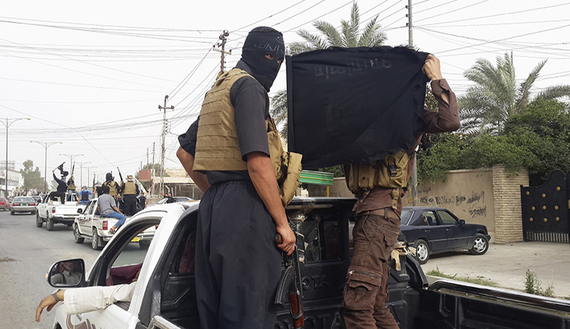 Fighters of the Islamic State of Iraq and al-Sham (ISIS) celebrate in vehicles taken from Iraqi security forces in the city of Mosul, June 12, 2014. (Source: al-Monitor photo by REUTERS)

Roma, 16 giugno 2014, Nena News – After capturing Mosul in Iraq’s north, the Islamic State of Iraq and al-Sham (ISIS) raided the Turkish consulate, the only diplomatic mission in the city, and took 49 people hostage, including Consul General Ozturk Yilmaz. When added to the 28 Turkish truck drivers ISIS took hostage a day before in Mosul, the number of Turks in ISIS hands has reached 77.

As I write this article, it has been 48 hours since the raid, and there is no concrete indication of how this hostage crisis might end. The hard fact is that ISIS is capturing Sunni towns in Iraq one by one, also taking hostage Turkey’s Syria and Iraq policies.

So long as this hostage crisis continues, Turkey might have to think twice before developing measures with its Western allies against international jihadists, who have been moving back and forth between Europe and Syria.

The ISIS hostage-taking immediately followed Ankara’s belated signals that it was reverting to realist policies to ensure the security of Turkey and Western allies.

On June 3, the Turkish Council of Ministers added al-Qaeda-affiliated Jabhat al-Nusra to the list of terrorist organizations. A week later, the council added Nigerian terror outfit Boko Haram to the list. Four days before the raid on our consulate, Turkish media reported that Ankara was evaluating intelligence received from Western allies on European jihadists, who pass through Turkey to Syria, and was henceforth taking measures at its borders.

This was followed by reports that Feridun Sinirlioglu, the number-two man at the Foreign Ministry, was going to Washington to hold meetings with his American interlocutors on June 9 and 10 about foreign jihadists in Syria.

These reports were indicators of how Turkey was trying to control the massive damage caused by its bankrupt Syria policies, after being forced by the heavy pressure of Western allies to take such steps. It was obvious that Syrian President Bashar al-Assad was staying for an indefinite period, and there was no point in allowing jihadists to cross Turkey to Syria so they could topple the regime.

But, just then, ISIS took over Mosul and the rest followed. We observed how the damage caused by Turkey’s wrongly conceived Syria policy had expanded, extending to Iraq and then boomeranging and hitting Turkey.

Yes, the hostage crisis is a boomerang effect — Turkey’s Syria policy has played a major role in fomenting the conditions that allowed ISIS to capture Mosul. Ankara, by ignoring its own border security, had allowed its Syria border to become a two-way “jihadist highway.” Thousands of international jihadists used this highway to reach Syria. Though al-Qaeda outfits did not topple the Damascus regime, they made a “jihadist bonanza” of northern Syria thanks to this highway. From there, they linked with al-Qaeda in Iraq, advancing along the Euphrates Valley. This is how they created synergy between the vacuum caused by the US withdrawal from Iraq and escalating sectarian clashes, allowing them to control Iraq’s Sunni-populated major cities.

Now, with the hostage crisis in Mosul, Ankara might have to pay multifaceted costs of its faulty Syria policy, in effect since 2011. We can view these costs from the narrow perspective of Ankara’s incompetence and shortsightedness of not evacuating the consulate in time.

When we look at Iraq from the wider perspective of Ankara, we see a country coming apart along ethnic and sectarian lines, and what a civil war might entail for Turkey.

We have to accept one reality: Ankara subscribed to the idea of fragmentation of Iraq long before these current events. Ankara’s strategic relations with the Kurdistan Regional Government (KRG) is proof, with Kurdish oil a central pillar of these relations. This oil-centered relationship was pursued despite US opposition and fervent objections from Baghdad, and the risk of growing forces that might lead to splintering of Iraq.

In the meantime, since 2009, Ankara’s Iraq policy had assumed visibly sectarian features. Ankara wouldn’t really mind if the Shiite Nouri al-Maliki government loses control of the Sunni regions of western Iraq. Actually, if those Sunni regions coming under al-Qaeda control had not led to a civil war environment with the potential to draw in a neighboring country and had not caused an increase in oil prices, Ankara might have welcomed such a development. But Turkey is now under direct threat of an al-Qaeda spin-off.

We mentioned a two-way jihadist highway. This highway has also transported many al-Qaeda elements to Turkey. But not only that. There are now reports that many Turks have joined al-Qaeda’s ranks in Syria, just like other European jihadists. A June 13 report in the daily Milliyet said ISIS has 3,000 Turks in its ranks.

In the meantime, Kurds took over Kirkuk, considering their traditional, historic capital was taken. Until recently, such a development would be seen by Ankara as violating a red line and would have been met with a stiff response. After all, Ankara has opposed an independent Kurdish state in favor of the territorial integrity of Iraq, and hoped to see Turkmen under the control of Baghdad, not the Kurds.

It should not be difficult to see Ankara now thinking, “Instead of al-Qaeda or a Shiite Baghdad government taking over Kirkuk, it would be better for our friend and strategic ally Massoud Barzani to rule it​.”

Paradoxically, a Kirkuk under Kurdish sovereignty is a Kirkuk that is accessible to Turkey. Kirkuk’s full domination by Kurds is a development Ankara will have to digest.

The linking of Iraq and Syria by al-Qaeda via the Sunni Arab-populated Euphrates Valley is the last nail in the coffin of Ankara’s bankrupt Syria policy.

The rational response to this new situation would be for Ankara to forget its impossible obsession with toppling the Damascus regime, and work with its Western allies to prioritize security measures to protect its citizens from al-Qaeda terror. Nena News