The dark side of Libya’s stability

The EU-Ankara agreement on migration may create a precedent for Libya. Tripoli asks for foreign military intervention and a joint plan on migrants, while Brussels prepares to seal off its borders 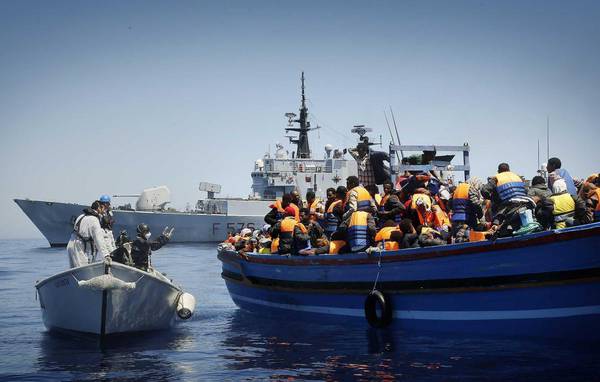 Rome, 1st May 2016, Nena News – As the new-born government of Fayez al-Serraj struggles to impose its political and economic authority on Libya, a Brussels-Tripoli agreement on migration – along the lines of the EU-Turkey joint action plan – seems closer than Libya’s national unity itself. The Italian Foreign minister, Paolo Gentiloni, made clear on Thursday that repatriations will not occur through Tripoli, “since Libya is not Turkey”. Yet, the inauguration of Frontex’s new siege in Catania – on April 27th – provided the minister of Interior, Angelino Alfano, with the opportunity of toying with the idea of a similar solution with Al-Serraj, “whenever conditions shall permit it”. Such hypothesis had already been touched upon by Angelino Alfano a week ago in Luxemburg; and repeated by the Libyan vice-president, Ahmed Maetig, in Rome the following day.

When it comes to the Libyan issue, referencing the Brussels-Ankara axis has two meanings. On the one hand is the belief that – beyond criticisms – a UE-Turkey agreement represents the very first step of a joint European policy on migration. To be imitated in its choral fashion, but not necessarily in its functioning scheme. On the other, is the idea of replicating with Tripoli what previously achieved with Ankara; including refoulements towards a ‘third country’. On this second option – quite unrealistic due to Libya’s precarious stability – also looms the uncomfortable legacy of the bilateral agreements between Rome and Tripoli. Signed back in 2009 by Muhammar Gaddafi and Silvio Berlusconi’s government – within which Angelino Alfano served as minister of Justice – and repeatedly accused of infringing international law.

According to the 18 March joint action plan, in exchange for € 6 billions over two years and visa liberalization for Turkish citizens by June 2016, Ankara shall receive the rejections implemented by Greek authorities; alleviating the burden of a Balkan route which put a serious strain on Schengen in the last months. Turkey will thus represent the ‘third country’ which both ‘economic migrants’ and asylum-seekers will be rejected to; with a rationale of one Syrian refugee accepted in Europe for each Syrian refugee deported to Turkey. The agreement, which Brussels sees as a “solution for illegal migration”, met harsh criticism from the United Nations and various NGOs committed to protection of refugees and Human Rights.

Three major doubts lay on the EU-Ankara joint action plan. The first revolves around rejections; which, according to many commentators, violate the asylum norms signed by EU members. The second questions Turkey’s definition as a ‘safe third country’. Both Human Rights Watch and Amnesty International defined Turkey as not apt for rejections; while at least 20 Syrian refugees were shot death in April by Ankara’s border guards as they tried to escape from Syria. The third issue of concern relates instead the difference between the asylum norms enforced by Europe and those implemented by Ankara; to the detriment of non-Syrian refugees – often labelled as ‘economic migrants’ – risking deportation once they are re-settled in Turkey. This is for instance the case of Pakistani migrants, as on April 8th the Turkish parliament approved an agreement to repatriate them.

3 million refugees are currently settled in Turkey. 2,7 millions among them are Syrians, while the remaining are divided among Iraqis, Afghans, Somalis, Pakistanis and Palestinians. As the barter of ‘one Syrian in Europe for each Syrian relocated in Turkey’ proves, precondition for an agreement with Ankara was the Syrian humanitarian emergency. Indeed, Syrians have in Turkey a temporary refugee status, waiting either for their return to Syria or for their relocation to Europe.

If we imagine to apply a similar scheme on the Libyan context – leaving aside the issues of refoulements and security –, migrants’ different provenience would probably make rejections much higher. Indeed, although it is safe to admit that the Balkan route’s closure will deviate the flow towards Italy – also thanks to better sailing conditions in summer – a joint action plan with Libya would inevitably deal more with sub-Saharan migrants than with Iraqis or Syrians. Moreover, since the distinction between so called ‘economic migrants’ and refugees is more and more drew according to nationality – rather than on a case by case evaluation as it should be – a large number of asylum seekers coming from Libya would be rejected. With the likely exception of Eritreans, Iraqis and Syrians; as they enjoy an easier access to international protection.

Within this framework, the migration compact – a document Italy presented at the European Commission and EU Council on April 15th – seems to suggest rejections to the country of origin; on the basis of bilateral agreements between Brussels and the sub-Saharan country where the migrants come from. However, continuous references to a joint plan with Libya, following the Turkish precedent, do not clarify the Libyan role; especially concerning repatriations. Moreover, the US decision to side European units in Libyan waters – as it already occurs in the Aegean Sea – for a possible naval blockade to begin next summer, makes Tripoli’s potential role even murkier. Especially since president Fayez Al-Serraj is as dependent on foreign support as willing to ask Europe whatever Europe tells him to ask for. From a military intervention against Isis to a joint action plan on migration. Nena News