The nuclear agreement and the lifting of sanctions open the Middle East’s gates to Iranian weapons. The Islamic Republic, which reached military self-sufficiency in 2012, may take advantage from declining political tensions to impose itself on the market 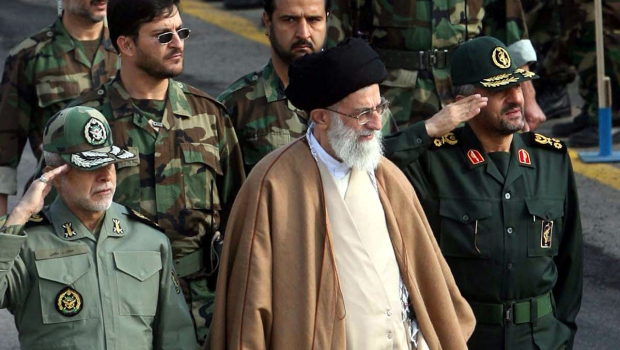 Rome, 20th April 2016, Nena News – “If tomorrow your capitals face danger from terrorism or Zionism, the power that will give you a positive answer is the Islamic Republic of Iran”. With these words, the Iranian President Hassan Rouhani accompanied the military parade that took place in Tehran on Sunday, as a part of the annual celebrations for the Military Day. The President also clarified that his country’s military power is not aimed at any of Iran’s neighbors, but that functioning as active deterrent it rather has a defensive role. The manifestation, during which Iranian army also unveiled the new Russian S-300 – delivered by Moscow earlier this month amid Israeli and American criticisms – offered a new opportunity to show off the results achieved by the Iranian arms industry.

Until autumn 2015, when both the arms embargo and economic sanctions were lifted, the Iranian army was forced to exclusively rely on its domestic production; which, from the mid-1990s’ onward, experienced an unprecedented growth. Back in 2012 – highlighting how, differently from Western powers, the Islamic Republic never veiled its achievements – Gen. Hassan Seifi announced Tehran’s full autonomy from foreign arms, explaining how domestic production’s standards and innovations had managed to fully match the army’s demands.

In the Nuclear Agreement’s aftermath, although arms imports and exports will keep on being supervised and approved by the UN Security Council until 18 October 2020 – unless AIEA will not certify the Iranian nuclear project’s peaceful nature -, the Islamic Republic already exports weapons to 57 countries, in addition to a wide variety of non-state actors – from the Lebanese and Iraqi Shiite militias to the Houthi rebels in Yemen – to which Tehran guarantees ideological, economic and military support. Within this framework, the eventuality that, in the wake of renewed commercial and economic ties with Europe and the US, Iran will gain a leading role in the war industry shall have two major destabilizing outcomes.

The first, more glaring, revolves around the unregistered arms traffics; and mainly regards the rivalry with Riyadh, as long as the strategic consequences that an increased spread of Iranian weapons in the region may trigger. The second, less evident, relates the deterioration of diplomatic and economic relations linking Israel and Saudi Arabia to Washington. Hence a possible upheaval of existing power structures. Indeed, as previously observed by the British journalist Jonathan Cook – before that the Nuclear Agreement was reached and international sanctions lifted -, more than the real development of nuclear weapons, Israel and Saudi Arabia are worried for their privileged relations with Washington.

The Saudis – who are already nervous due to the plummeting oil prices and the US growing energetic self-sufficiency – see Iran as the main threat to their power and vent their anger on a devastated Yemen. From Riyadh’s perspective, an Iran freely trading in arms would obviously constitute a security threat – due to Tehran’s support to various Shiite militias in the Middle East -, but also a political-economic one; as the Islamic Republic’s come back in the international community would offer a good commercial and energetic alternative to Europe and the US. European delegations to Tehran and President Rouhani’s diplomatic journey to Europe just corroborate these concerns.

On the other hand, Israeli preoccupation is linked instead to the monopoly on armaments industry, and to the eventuality that an internationally more accepted – and acceptable – Iran shall weakening Washington’s unconditioned support to Tel Aviv, as long as the latter’s occupation of Palestine. Between 2014 and 2015, sales of Israeli military products to European countries increased from $ 724 millions to $ 1,63 billion; while in May 2015, few months earlier than the Nuclear Agreement was reached, Washington delivered $ 1,9 billion of weapons to Israel. Many analysts saw that as an attempt to calm down Tel Aviv’s opposition;quite a likely hypothesis if considered that a similar delivery was made to Riyadh in the same period.

Moreover, every major arms producer requires adequate fields of experimentation. If East Jerusalem, the West Bank and Gaza have always offered a privileged laboratory for Israeli and US weapons; the Syrian civil conflict, the war against Islamic State and Yemen’s destabilization provide the Iranian arms industry with a crucial test bed. In other words, Iran is both responsible and beneficiary of a wide belt of instability, serving both its strategic and economic interests.

Within this framework, if the AIEA should certify the absence of a hostile nuclear program before 2020, the limitation imposed by the UN Security Council on Tehran’s arms sales – already violated by Moscow with the delivery of S-300 – will automatically collapse. And the Islamic Republic of Iran may fully enter the Army market with relatively cheap products able to preoccupy Israel, and with a renovated international legitimacy already worrying Riyadh. Nena News

The original version of this article can be found here