Syria’s Valley of the Christians Under Fire

The battles between the Syrian army and armed extremist groups in Zara, surrounding the Krak des Chevaliers, are echoing throughout Wadi al-Nasara. Each day, the villages in the valley bury new victims. 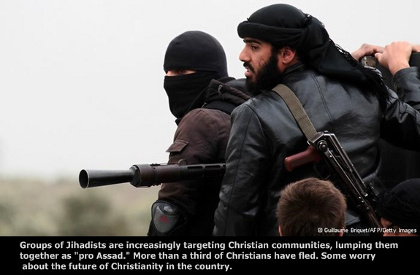 The driver’s voice mixed with the sound of the snowy wind pounding our speeding car as it traversed the Hawash-Zara road, in Wadi al-Nasara, west of the city of Homs. “This road is dirty at night,” the man remarked.

There were two men in the back, sticking their rifles out the window. You feel fear, but you try to pull yourself together.

It was pitch black outside, and the Syrian opposition militants holed up in the Krak des Chevaliers crusader castle are known to target this road. But according to the driver, the situation is now safer, after the Syrian army established new positions and stepped up its security measures. The minutes passed heavily, with the images of gratuitous death and beheadings in Wadi al-Nasara playing over and over again in your head.

Those fighting alongside the Syrian army have made their peace with death. They talk about their comrades who have been killed in a sad, matter-of-fact tone. The residents sheltered in their homes in the valley might not be facing certain death like them, but the odds of being killed from random shelling and the almost daily sniping by the militants remain high. And while army reinforcements in preparation for the liberation of Krak Des Chevaliers improved conditions along the road in the past two weeks, travel by night is still risky.

The cold weather is not the biggest concern behind the sand barriers. Nizar, a pro-regime fighter, adjusts his wooly hat and blows warm air into his palms, as he divides his gaze between his night vision scopes and us. “You can’t afford to be cold or to close your eyes. The militants are trying to sneak in every hour. I hope they do, so I can show them to you on the scopes.”

The fighters stationed here include Syrian army soldiers, National Defense Forces members, and fighters from the Syrian Social Nationalist Party (SSNP). But the majority of them are in truth residents of nearby villages.

The Scourge of Beheadings

Most of the Christians who remain in the region are not banking on salvation to come from Western Christendom. Those who have not fled say they now prefer to die here as opposed to receiving the “White Man’s charity,” anyway.

Tony, who works at a shawarma restaurant in the village of Hawash, does not want to leave. Like him, the mother of Hossam, from the village of Hanbara, who was killed in the conflict, wants to stay close to his grave so she can visit him every day. Countless others like them want to stay, too. Syria is the only home they have.

During a January 29 attack on a National Defense checkpoint in the town of Ammar al-Hosn, the militants took great joy in mutilating the bodies of the troops who had been manning the checkpoint. They gouged the eyes of one corpse and beheaded another, taking the head with them.

Over the past several weeks, the militants beheaded many others, including fighters from the National Defense Forces, an SSNP fighter named Hanna Karam, and also civilians, most recently a young man named Fadi Matta, from Marmarita.

Our guide, during a tour of Syrian army checkpoints during the day, reckoned that the goal of the beheadings was having the opposite of its intended effect among the residents of the valley, who are now more adamant about taking up arms against the militants. Indeed, with the increasing attacks against the residents, a new batch of fighters has been arriving almost every day from surrounding villages like Bahzina, Hanambra, Shallouh, and Hawash to the sand barriers, to enlist against the militants.

Some come from universities, others from their jobs in restaurants, farming, and various other professions. One of the fighters said, “Life on the battlefield robs you of everything. You only think about killing militants or imagining yourself dead.”

Those fighting alongside the Syrian army do not deny that some of the militants are highly experienced, especially sharpshooters. In Zara, it is all about “who shoots first?” When army snipers, who are also professionals, find it hard to take out a sniper from the armed extremists’ ranks, for example, Syrian army soldiers use guided missiles for the job, because one sniper can slow down the advance of dozens of soldiers for several days.

Those in foxholes and along the front lines are not mindless rifles. Many of them can handle themselves well in political conversations. Abu Joseph, from Marmarita, said, “The war is not between Sunnis and Shia, or Alawis and Sunnis. It is between backwardness and all Syrians, including us, the Christians.”

Hanna Karam’s funeral was held on January 31 in Bahzina. The procession was permeated by as much anger as sorrow. The young man was killed in an attack on Zara farms. When his comrades were finally able to retrieve his body, the takfiris had already severed his head.

It was a closed-casket service. The coffin was carried while the town’s scouts performed the Syrian national anthem. Hanna’s bereaved mother walked behind the coffin, calling his name like he was still there, drinking coffee with his brothers near the church and the cemetery.

They Haven’t Tried the Tank Yet

For the residents of Wadi al-Nasara, Krak des Chevaliers is now a monster made out of stone, perched in the high mountain, spoiling their lives day and night, with the corpse-obsessed ghouls it shelters. Facts, rumors, and outrageous myths intermingle among the residents about the medieval castle and the militants hiding inside.

While some locals claim that 5,000 to 7,000 militants are inside the crusader castle, military sources assert that the real number does not exceed a thousand, though they admit that the militants are in possession of huge quantities of arms and ammunition. Recently, the militants were able to seize a tank, a 37-mm gun, and a mortar from the army.

Suddenly, the residents turned into military experts, and panicked ones at that. But even days later, there has been no shelling from the tank on the village. “They didn’t try the tank yet!” quipped one patron at a small shop in the village. He continued, “They tried the 37-mm. Two days ago, they fired at Marmarita, but thank God, no one was hurt. Let’s see when they will use the tank. Yesterday, they tried the mortar.”

The military sources said that the militants are saving the tank for the “major battle,” and are hiding it from the Syrian air force.

Marmarita is the largest Christian town in Wadi al-Nasara, alongside the town of Hawash. The majority of its residents are Greek Orthodox Christians. Before the conflict, they numbered 7,000. Today, more than 30,000 people live in the town, including many Christians displaced from the Bustan al-Diwan district of Homs, as well as from Hamidiyeh and the city of Qusayr.

The road to Marmarita from Hawash takes longer than usual. Before the war, the road passed through Krak des Chevaliers and did not take more than 10 minutes. Now, the road has been diverted to the town of Daghleh, and it takes around half an hour. Half an hour is okay, if it means avoiding sniper fire – or an extremist waiting to slit your throat.

At night, it is possible to encounter some patrons at the town’s restaurants, but even so, they are only a handful. Before the conflict, Marmarita was one of the most important summer resorts in Syria.

In the daytime, one can see Krak des Chevaliers to the southwest. On a clear day, one can also see the LebaneseCedarMountains and a good part of the Western Lebanon Mountain Range.

Residents of Marmarita took up arms to defend their areas a while ago under the leadership of Bashar al-Yazigi. They joined the Popular Committees first, and then the National Defense Forces, in addition to the SSNP. Eight fighters from Marmarita have been killed in action, in addition to two civilians and a number of Syrian army soldiers and officers.

In the afternoon, when the shops start to close, one will be able to see an interesting sight: all the shutters have been recently painted with the colors of the Syrian flag.