There is growing talk of the U.S.’s responding to its defeats on the Syrian soil by arming the opposition with shoulder-carried anti-aircraft missiles, in a repetition of what happened in the Afghan war. Any advanced American missiles delivered to the Syrian opposition could lead to them being used against Russian – and not only Syrian – warplanes 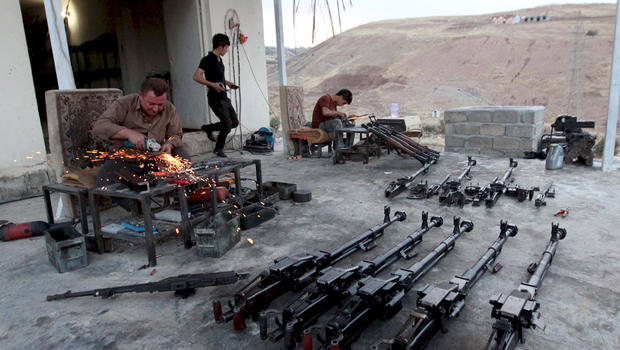 Rome, 29th of September 2016, Nena News – When UN Syria Envoy Staffan de Mistura agrees with Hizbollah’s leader Sayyid Hassan Nasrallah that a military solution is now much more likely than a political solution, whose chances have dwindled to almost nil, this is one of the most palpable ironies in the latest chapters of the Syrian scene.

On Monday, de Mistura said that ending the war has become impossible due to the collapse of the truce and the escalation of the bombardment. For his part, Sayyid Nasrallah was reported by Tuesday’s Lebanese daily al-Akhbar (that is close to his party) as saying: ‘there is no horizon for a political solution and the final word belongs to the battlefield'; and that ‘there is no moderate opposition, since all opposition groups are either with Nusra or ISIS.’

The battle in Aleppo is at its fiercest. Since last Thursday, Russia has adopted the military option and has relentlessly begun to implement the ‘Grozny scenario': that of an intensive bombardment from the air as a prelude to the advance of ground forces. Meanwhile, Syrian forces have begun to advance towards eastern Aleppo making some progress, including recapturing Farafra neighborhood northwest of the historic fortress of Aleppo. According to some predictions, recapturing the rest of the city’s neighborhoods is now a matter of days, or weeks at most.

Meanwhile, the U.S.’s attention is focused more on the TV debate between presidential candidates Hillary Clinton and Donald Trump than on what is happening in Aleppo, despite the clamor of its Arab allies and the intensive media coverage of the scale of the destruction and the growing number of people killed, especially civilians and children.

U.S. UN Ambassador Samantha Power, acted like her Arab League counterparts when she told the Security Council that ‘what Russia is doing in Aleppo today is not counterterrorism; it is barbarism.’ She and her British counterpart, Matthew Rycroft, confined themselves to withdrawing from the Security Council’s hall when Syria’s UN Ambassador Bashar al-Ja’fari began to speak. He stressed that ‘the war on terrorism has not yet begun and Syrian victory is now inevitable and certain.’

Russia maneuvered cunningly when, in order to gain time, it joined the negotiating process in Geneva and Vienna under the banner of searching for a political solution. It lured U.S. Secretary of State John Kerry into a trap when it dragged him towards signing a week-long truce to be followed by a joint Russian/U.S. offensive aimed at eradicating Fateh ash-Sham (the former Nusra). But when Kerry awoke from his coma and found himself behind the bars of this cage, it was already too late.

Russian President Putin has clearly realized that the U.S. has neither the desire nor the ability to do anything in favor of its allies in Syria, especially in military terms. Perhaps the Syrian activist who embarrassed Kerry at the London Conference [last year] and got him to ‘admit’ that ‘the U.S. will not go to war for your (the Syrians’) sake’ was much more effective and indicative that all the Syrian opposition’s discourse and military posturing. He exposed the true nature of U.S. policy and its intentions towards his country, and revealed the U.S.’s true face that many know well.

If the Syrian army manages to recapture Aleppo, that would count as a major psychological and political achievement for the Syrian government. For this would confirm that all the major Syrian cities, with the exception of Idlib – such as Hama, Homs, and Damascus, as well as Latakia and the coastal cities – were under its control.

The Syrian opposition wanted to make Aleppo its capital just as it allies in Yemen did when they made Aden the alternative capital for Mansour Hadi’s government and its supporters. But the U.S.’s lack of will to fight, the preoccupation of its major Saudi ally with its financial crises and war in Yemen, and the change in the priorities of its other ally Turkey, which has focused on the establishment of a buffer zone so as to foil the Kurdish secessionist project and resettle Syrian refugees in it – all these factors have made it difficult if not impossible to realize this wish.

Surprises are possible, and there is growing talk of the U.S.’s responding to its defeats on the Syrian soil by arming the opposition (via its Arab allies) with shoulder-carried anti-aircraft missiles, in a repetition of what happened in the Afghan war that ended in the Soviet forces’ defeat and withdrawal. Any advanced American missiles delivered to the Syrian opposition could lead to them being used against Russian –and not only Syrian– warplanes. That would transgress all red lines, leading us closer to a direct Russian/U.S. collision, something that certainly neither superpower wants. [UN Envoy] De Mistura and [Hizbollah leader] Sayyid Hassan Nasrallah were certainly correct in predicting that the prospects for a political solution are now nil, and that the final word belongs to the battlefield

“The coming days or weeks may be the most dangerous in the five years of the Syrian crisis so far; but only God knows best!” concludes ‘Atwan.