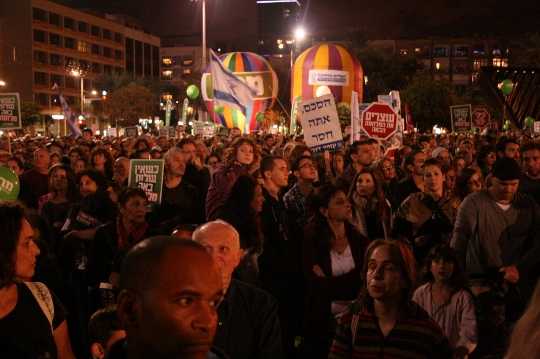 Roma, 4 novembre 2014, Nena News – At the opening of Saturday night’s rally marking 19 years since the assassination of Yitzhak Rabin, a video of the slain prime minister’s final speech was aired on giant screens, alongside shots of the protesters from that same night in November 1995. At the end of the segment, the screens showed an aerial view of last night’s actual protest. Were the protest not significantly smaller than the one in 1995, it would have been difficult to tell the two apart.

The opening symbolized the general atmosphere of the rally. The speeches, the crowd, the chants, the messaging – everything looked like it had been frozen in time since that fateful night. It was as if it wasn’t yet clear to the crowd how much damage the Oslo Accords had caused. As if those same people who led these rallies both then and now didn’t go along with the concept that “we have no partner.” As if they didn’t participate in a coalition of death and war or support thedisastrous Gaza disengagement. As if we didn’t just participate in a war that ended with 2,300 deaths. As if Jerusalem isn’t burning. None of these issues were even mentioned.

One after the other, the speakers (Shimon Peres, Haim Yalin, Gilead Sher and Yuval Rabin) got up and recycled the same old slogans: peace is made with enemies, being Jewish means searching for peace, we must separate from the Palestinians so as to preserve the Jewish character of the state, negotiations are the only way to peace, etc. Not one bit of introspection regarding the error of their ways. Not a sign that 20 years have changed their minds even in the slightest, or even raised the need to start talking about the details of a proposed peace plan that goes beyond the same statements that even Netanyahu and Liberman know to declare by now.

The only speaker who presented a concrete vision was Gilead Sher, a political ally of Rabin and Barak, who today leads the organization “Blue White Future.” Sher was the only person who spoke about setting a clear border for the country. And which border? The separation barrier. For years Sher has championed the annexation of lands and settlements that are located “by chance” to the west of the barrier, which itself was established solely for security reasons – as per the state’s promise to the High Court – but unsurprisingly ended up as the border that most in the center-left think is worth living with.

Thus, Sher’s vision of peace starts with the annexation of ten percent of the West Bank, as well as its bifurcation into two parts through a barrier that would swallow the Mishor Adumim area near Jerusalem. Thankfully he didn’t speak about Jerusalem, the Jordan Valley or Palestinian refugees.

Twenty years after Oslo, and the logic of separation has remained the dominant mode of thinking among Rabin’s successors. As if the state can simply be “Jewish and democratic” with a large Palestinian population that does not intend on giving up on the struggle for equality.

As if the economic system, the infrastructure, the resources and the regime of both societies haven’t been so deeply intertwined after nearly 50 years of occupation, that it is simply possible to disconnect the two. As if a real Left can only be Jewish, without cooperation with the occupied who are struggling for independence. One protester who came to the rally with a Palestinian flag was stared down by those around him, as well as some of the organizers.

There were, however, two moments of hope. One was a performance by “Women for Peace.” Nineteen women, Jews and Palestinians from different backgrounds and different areas of the country, got up on stage. Together, with a range of voices and opinions, they spoke of the need to stop the war and take the power from the men who have a monopoly over the state. This is a new group – neither political enough nor unified enough. But something in their presence on stage gave a feeling of change and hope.

The second moment was when Michael Biton, who heads the Yeruham local council, got up to speak. Biton described the social aspect of peace, which somehow has almost always absent from the Zionist left’s peace events. Biton spoke about social gaps as a security threat, and talked about his mother, a cleaner, who once enjoyed excellent health benefits. Today, no cleaner can even dream of those kinds of conditions, Biton said, emphasizing that the struggle for a just society must be more clearly connected to the struggle for peace – that one cannot exist without the other.

The crowd was rather quiet during most of the rally. The only moments of excitement came when people spontaneously yelled “Bibi, go home!” during Sher’s portion, when the Women for Peace spoke, and of course during Shimon Peres’ ceremonious speech. The lack of enthusiasm only emphasized a lack of direction, as well as the feeling that the rally was actually more of a journey into the past, from which it could not return.

I believe that many of the attendees came with good intentions. Most of them probably would say that they oppose the occupation, and maybe even the siege on Gaza. And there is value in talking about peace and about a vision for ending the occupation – a word that was not uttered even once in all the speeches I heard.

But without going beyond the boundaries of Rabin Square, without Jewish-Arab partnership, without fighting for social justice, without actively opposing useless wars, and without proposing a detailed and clear alternative based on the need for full equality, freedom and democracy for all residents of this land, including a solution for Palestinian refugees, this peace camp will remain stuck in 1995 forever. Nena News