The people of the Golan return to the ‘Shouting Valley’

In Ain al-Tineh, opposite the occupied town of Majdal Shams, Syrians are back to commemorate the time when the residents of the occupied Golan Heights refused to take up Israeli citizenship. 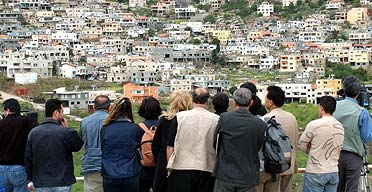 A person standing opposite the occupied town of Majdal Shams for the first time, in the occupied Syrian Golan Heights, may experience an accelerating heartbeat – not very much unlike what happens during a person’s first kiss. But the barbed wire surrounding the town disrupts the serenity of the stones and golden-brown hills.

To the right stands majestic Mount Hermon, remnants of snow still lingering in the distant summits. An Israeli army post lurches on Hermon’s slopes, like a heavy rock on your chest.

To the left, the hills and plains of Quneitra run parallel to the occupied Golan Heights. Immediately behind it stands the village of Hadar. From this vantage point, the homes in Majdal Shams appear like clusters of grains sprinkled on the orange and brown hill.

The last stretch of the liberated Golan is situated right here, at Ain al-Tineh, and has come to be known as ShoutingValley. After the 1973 War, residents of liberated Hadar and occupied Majdal Shams were separated into “two banks,” and since then, they would meet, converse, and share news and concerns by shouting in megaphones, giving the area its name.

The battles raging between the Syrian army, and armed extremist groups and the remnants of the Free Syrian Army (FSA) in the villages and towns of the Quneitra governorate, made it impossible in the past two years to observe the annual festival on February 14, which commemorates the day the people of the occupied Golan Heights rejected Israeli citizenship in 1982.

This year, the Syrian army, bolstered by the National Defense Forces (NDF) and the Popular Committees, was able to make considerable progress on the ground. This has encouraged residents to revive the commemoration with people from Hadar, Arna, and some refugees from the towns of Jbatha al-Khashab, Khan Arnbeh, and other areas of Golan to gather and communicate with the people of occupied Majdal Shams, Baqaatha, Masaada, and Ain Qanya. However, difficult circumstances have prevented many others from Suweidaa, Daraa, and refugees from the Golan who now live in the Damascus governorate to reach the area and participate.

Youssef Hassoun, 16, wraps himself in the Syrian flag, and runs down the rocks and hills in the direction of the valley. He is wearing a taqiyye, a head cap typically worn by members of the Druze community.

But Hassoun will not be able to get too close to the occupied territories: one hundred meters or less away, there is a field of old mines laid by the Syrian army a long time ago. Beyond it, there is another field of mines that the Israeli army has re-laid, after the last gathering held here to commemorate the Nakba three years ago, when Palestinian and Syrian youths crossed over the barrier. The Israeli soldiers shot and killed several of them.

For the first time since the October War and the subsequent War of Attrition, the villagers have come to their annual gathering heavily armed. The locals now never let down their guard, after militants from al-Nusra Front and the Islamic Front threatened to attack the commemorators, including with mortar shells, or by means of sniper attacks against people travelling in the area.

But neither Syrian opposition militants, on the liberated side, nor the Israeli army, on the occupied side, were able to dissuade the residents from gathering near the Majdal Shams crossing.

Several meters below Jawad and his father, armed men and women stand watch along the railing of stone-made steps that the Syrian government built specifically for the annual event, most of whom wearing the Syrian flag. Beyond the steps, there is an open hall surrounded by flags and banners, and popular music and the Syrian anthem could be heard from under its roof.

Youssef returns from the bottom of the valley, panting, with a broad smile on his face. Clans like Hassoun, Tawil, Abdallah, Mustafa, al-Aawar, and others have many relatives in the occupied villages. Youssef said, in a shy tone, “We chat via WhatsApp,” in reference to the mobile phone Internet-based service.

What the young man says shatters the romanticized image about how separated families in the occupied territories go about their lives and relationships, as seen in Lebanese director Randa Chahal Sabag’s 2003 film The Kite . Social media has eliminated the need for megaphones, which the residents have now replaced with Internet messaging to communicate with their relatives.

Through the lenses of the binoculars, it was possible to see that the people of the occupied villages across had put up chairs around a small platform to make speeches, with two huge Syrian flags hanging behind them. Men and women, old and young, and even children gathered in the surrounding fields, donning binoculars too, and pointing towards the gatherers on the liberated side.

Not all the gatherers at Majdal Shams are local residents. Many of them are Palestinians from the territories occupied in 1948. If the occupation did not impose a ban on the residents of the West Bank to enter the Golan, many more would have also come, according to former prisoner of war Sudqi al-Maqt, who spoke to Al-Akhbar.

The villages of Majdal Shams, Baqaatha, Masaada, Ain Qanya, and al-Ghajar are in truth the only villages in the Golan still inhabited by their native residents. In the 1967 War, the Israeli occupation ethnically cleansed two cities and more than 300 villages and farms in the Golan, using systematic massacres, bombardment, demolition of homes, and arrests, completely leveling existing villages.

The invading army had not yet reached the mountains where the remaining villages are located when the UN peacekeeping forces arrived. The Israelis could not forcibly displace the residents of these villages, who insisted on remaining in their homes.

Today, around 23,000 Syrians live in the Golan Heights, and reject Israeli citizenship. They inhabit an area that is no bigger that 7 percent of the total area of the Golan Heights, which represents the primary source of water for occupied Lake Tiberias (Sea of Galilee). Meanwhile, 10,000 Jewish Israeli settlers live in 45 settlements built atop the ruins of Syrian villages, the largest of which is the settlement of Katzrin, which was built on the ruins of the Syrian town of Qisrin. Recently, the Israeli government officially declared the settlement an Israeli city.

The Road to Ain al-Tineh

From Lebanon, it would have been possible to cross into the area from the Lebanese Shebaa farms, for example, in 15 minutes, were it not for the Israeli occupation – and the divisions of the Sykes-Picot Agreement. Now, because of the conflict in Syria, it is not possible to take the Salam Expressway linking Damascus and Quneitra, because of the ongoing fighting on the outskirts of the Khan al-Shih and Jdeidet Aratouz, and pockets of militants in the city of Qatna. Although the Syrian army has full control of the expressway, armed opposition snipers and mortars still target the road, without distinguishing civilians from combatants.

Instead, we had to take a road that runs parallel to the highway, through bases of the Syrian army 10th Division that is not open to civilians. The 30-minute trip across the 10th Division territory, with the artillery and tanks heavily deployed there and the awesome fortifications, helps explain why the 17th Division has been able to stand its ground in the Raqqa governorate for more than a year and a half.

On both sides of the road, the political department of the division that is specifically trained to fight the Israeli army has put up banners warning soldiers against collaborators, and others to lift their morale. One of the memorable banners declared, “Artilleries are the gods of war.”

Beyond the 10th Division zone, the road continues through the town of Saasaa, where the army is fighting against small pockets of militants. After that, we reach the turn to the town of Hadar before the city of Quneitra, the headquarters of the UN forces operating in the Golan Heights.

Sumac trees on the side of the road to Hadar are still dry this time of year. The roads that were until recently off-limits to the residents, who number more than 10,000, are now 80 percent secure, after the army and the Popular Committees were able to push back the militants and keep them confined in pockets along the buffer zone with the occupied Golan Heights.

Minutes from Hadar, we arrive to Ain al-Tineh, through the checkpoints of the Syrian army 90th Brigade. What was always a dream is now a reality: We finally see the Golan, and Majdal Shams.