Various reports highlight a worrying increase of arms sale in the region. US and Saudi Arabia champion exports and imports respectively, UAE and Turkey follow. Arms race and its vicissitudes explain current polarization 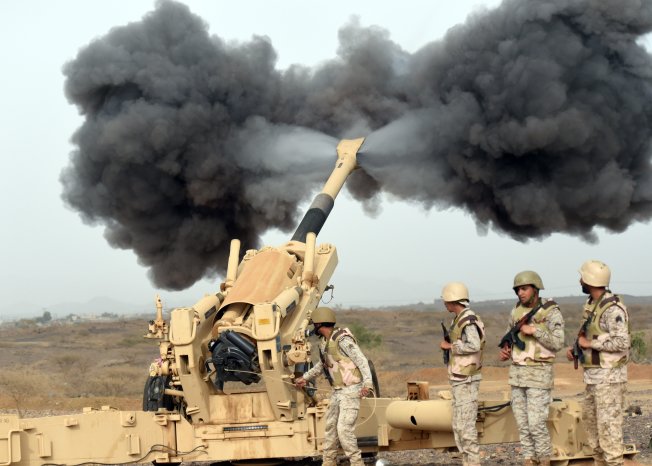 Rome, February 29th 2016. Nena News – Arms market in the Middle East have seen a 61% increase over the last five years and Saudi Arabia, along with the more and more markedly Sunni coalition it encourages, was the undisputed key player. Indeed, according to a report published last month by the Stockholm International Peace Institute, Riyadh is the second largest importer in the world after India, and first client of Washington and London; from which it receives 9,7% and 46% respectively of their exports in the military sector. Since 2011, the kingdom’s imports have thus experienced a 275% increase compared with the previous five years, while a study produced by ATTmonitor reveals how, only in the last 12 months, Riyadh purchased $ 25 billions of military supplies from Canada, France, Germany, the Netherlands, South Africa, Spain, Sweden, Swisse, Turkey, United Kingdom and United States. These weapons were both transferred to Syria – supporting anti-Assad Islamists militias -, and in Yemen, where they’ve been indiscriminately used since March 2015.

From this perspective, the request of embargo voted by the EU parliament last week, with the purpose of stopping arms sale to Riyadh due to its misconduct in Yemen, couldn’t avoid raising criticism among many commentators, both due to the timing with such a decision saw the light, and its dubious effectiveness. Formalised on February 25, with 359 to 212 votes, the measure won’t indeed be binding for the Union’s member states, and although Richard Howitt – the Labour MEP who drafted the key amendment – defined it as a “clear humanitarian appeal to end the bloodshed in Yemen”, it is legitimately believable that it won’t have an impact on the on-going conflict.

Bombings against the Houthi rebels in Yemen have been continuously proceeding from March 2015, when a Saudi-led coalition of 9 Arab states – with the International Community’s tacit approval – intervened in the country siding with President Abd Rabbuh Mansour Hadi. Over this year, the conflict has been producing at least 7,000 human causalities, 35,000 wounded and 2 millions of displaced persons, in addition to almost irreparable damages to an historical-architectural heritage among the oldest of the Islamic world.

Within this context, at least 3 allies of Riyadh in Yemen have been increasing their military imports, both since 2011 and over the last 12 months. The UAE – purchasing in Washington, Paris and Rome and importing great amounts of arms since 2001 – rose their military spending by 35%, but they are the second largest importer in the region after Saudi Arabia. Even Egypt, already benefiting from generous US funding under Mubarak, experienced a more modest increase over the last five years (37%); yet, only in 2015, it imported up to $ 1,47 billions of arm supplies. Quite a considerable gap compared with the previous year’s $ 368 millions. Finally Qatar, already very active in funding the Syrian revolt since its outbreak, augmented its military expenditures by 279% in five years: proportionally more than Saudi Arabia.

The data registered by the Stockholm International Peace Institute – which makes five-years surveys on the arms market – take into exam a period running from 2011 and 2015, namely between the political instability following the Arab Uprisings and Iran’s international rehabilitation after the nuclear deal. Over these five years, the collapse of State entities in Libya, Syria, Iraq and Yemen – matched by the US progressive withdrawal from the region – opened new spaces for Saudi Arabia and Iran’s ambitions and was conducive to a proxy-war that is more and more taking a sectarian hue. From Syria to Iraq and from Lebanon to Yemen.

Such polarization is hence reflected by an arms race, started in the aftermath of 2011, which has never been so intense in the region’s history since the early 1980s’. In other words, although Riyadh keeps on stressing its coalition’s Pan-Arab character, it is not accidental that it includes 8 Sunni-Arab countries – Morocco, Egypt, Sudan, UAE, Qatar, Kuwait, Bahrain, Jordan -, and 3 Sunni African ones – Senegal, Mauritania and Somalia – deploying ground troops in Yemen in exchange for economic aids from Riyadh. And it’s even more significant that when King Salman asked Pakistan to contribute – request than refused by Islamabad -, he precisely asked for Sunni soldiers.

On the contrary, if the Iranian support to Houthi militias – belonging to a Shiite sect – was never explicitly acknowledged by Tehran, various shipments of weapons has been intercepted since March 2015; the last was denounced few days ago by US forces. And it’s not accidental that the Houthi spiritual leader, Abdel-Malek Al-Shami – wounded in battle at the beginning of the conflict – died in a hospital in Tehran and was buried in Lebanon in the Garden of the Two Martyrs, together with Hezbollah’s past leading figures. To this regard, the announcement made by Riyadh last week, according to which Saudi Arabia could stop paying for French arms to be delivered to the Lebanese Army ($ 3 billions) if Hezbollah won’t withdraw its support to the Houthis in Yemen and President Bashar al-Assad in Syria, just corroborates this scenario.

Within this framework, although the vote at the EU parliament and Saudi threats to Lebanon shed light on the conflict in Yemen, the main dispute is indeed fought in Syria in which, passing by Turkey, a major part of the US, French, German, Spanish and Italian arms delivered to the Gulf countries between 2011 and 2014 flown. Where the presence of Iranian arms and soldiers, alongside Hezbollah and other Iraqi Shiite militias, is now candidly declared by Tehran. And where, in defiance of the precarious ceasefire agreed upon by Washington and Moscow, Riyadh seems more and more intentioned to intervene, together with Turkey. Turkey that – for completing the circle -, while appearing less influenced by its ally’s sectarian logics, equally shows increased restlessness and interventionist bents; besides being the second largest army within NATO and the third arms importer in the region. Nena News