A survey of the local and international military forces currently deployed in the region provides an idea of how intense the ‘Great Game’ that is unfolding in the region has become, especially the Fertile Crescent. The Arabs’ lands have become the arena where this struggle for hegemony is being played out 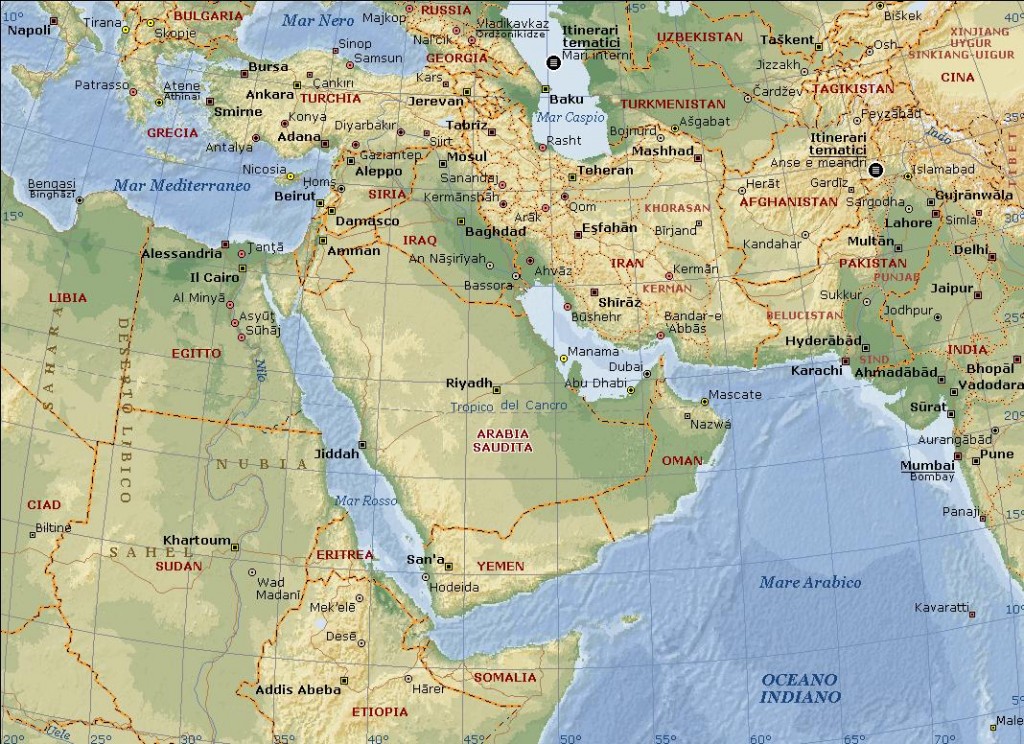 In order form a picture of the complexity of the current Middle East scene, a simple survey of the various conflicting powers’ military presence on its countries’ territories would suffice. In doing so, one may understand the ‘Great Game’ whose chapters are unfolding in the region. The deployment of foreign forces on the ground reflects the various parties’ priorities, strategic and historic readings of the situation, as well as their interests. And this may help to predict the course of the international and regional conflicts, and allow us to speculate concerning the likelihood of a settlement.

Two Russian bases are now located on the Eastern shores of the Mediterranean, with the American Sixth Fleet deployed behind them. Russian and Iranian forces are deployed within Syrian territories, as well as fighters from Iraq and Lebanon who are helping the Syrian army in its war against its opponents. These allies fight alongside the Syrian army’s forces wherever there is need for them, and they are currently concentrating their operations in the area Southwest of Aleppo and in Damascus, Deir az-Zour, al-Quneitra, and Der’a’s countryside. Meanwhile, Russia is planning to deploy observers in the ‘de-escalation zones.’

In addition to the forces fighting on the Syrian army’s side, American, French, German, British, and Turkish troops are backing the various groups deployed in the country’s East and West. This Western presence in Syria is one result of the Spring 2016 Hanover summit hosted by German Chancellor Angela Merkel in the presence of then British PM David Cameron, then U.S. president Barack Obama and then French president Francois Hollande.

These leaders agreed to exclude Ankara from the war’s major operations against ISIS in both Iraq and Syria. They also established bases for the deployment of Western Special Forces to help the SDF (Syria Democratic Forces) led by the YPG (Kurdish People’s Protection Units) in the war on ISIS. German and American troops deployed in the Manbij area in Aleppo’s Northern countryside, while soldiers from France and the U.S. deployed in ‘Ain al-Arab in Aleppo’s Northeastern countryside. Finally, British and American forces deployed in Tanaf camp in the Easternmost parts of Syria.

Meanwhile, Ankara responded to its exclusion from the Hanover summit by deploying Turkish military forces North of Aleppo, as part of its Operation Euphrates Shield on which agreement had been reached during the St. Petersburg summit between Russian President Vladimir Putin and Turkish President Recep Tayyip Erdogan in early August last year.

If we are now to shift our focus a little to Iraq, we would find an Iranian, Western, and Turkish military presence in the entire area even if it varies from country to country. In the central parts of Iraq, where ISIS grew and turned into a mini-state threatening the stability of the region and the world, there are Iranian military advisors. Meanwhile, Washington is working on consolidating its military presence, as well as deploying troops and building bases in Northern Iraq. For their part, the Turks are present in Ba’shiqa camp in Iraqi Kurdistan Province in the North; but it seems that no one wishes to talk about this now.

In Jordan and the Arabian Gulf, the Western presence is at the forefront. There is British and American military presence in the Hashemite Kingdom, while Qatar and the UAE host French and American military bases. The Turks also have a strong military presence on Qatari soil, which was further strengthened after the Gulf crisis. And in the Arabian Gulf itself, Washington has its Fifth Fleet permanently deployed, while the number of its soldiers in the Gulf stands at more than 30 thousand, which is the same number of soldiers that Washington deploys in Southeast Asia.

And, finally, there is Israel, which former U.S. vice-president Joseph Biden described as the cheapest aircraft carrier in the world.

The above survey clearly suggests that the current deployment of competing military forces in the Fertile Crescent – primarily including Iraq, Syria, and Lebanon – indicates that this will be the main arena where the fate of the ‘Great Game’ will be decided.

And one may summarize the military scene in the Fertile Crescent as follows: Western forces, primarily relying on U.S. Special Forces, are deployed in Western and Northern Iraq, as well as in the areas East of the Euphrates in Syria, and in Tabaqa, Tanaf, and Manbij; Turkish forces are deployed in a narrow strip between Jarabulus and A’zaz in Aleppo’s Northern countryside, and in some areas in the Idlib Governorate, especially those overlooking the ‘Afrin area; and Iranian advisors are deployed in the South and center of Syria, and South of the city of Aleppo, as well as in Baghdad and in the central Iraqi governorates, in addition to advisory Iranian units in Lebanon to back the Lebanese Hezbollah.

This tapestry of military deployments reflects the various parties’ priorities and how they read history: Washington is working on the restructuring the Fertile Crescent by strengthening the weight of Kurdish factor in the equations governing the region’s states. Moscow, on the other hand, wants to reach a political settlement for the Syrian crisis and secure a permanent access to warm [Mediterranean] waters. Turkey is devoting its main efforts to containing the activities of the PKK (Kurdistan Workers’ Party) and its extensions in the region, and depriving the West of a new ally in the region that would enable them to do without relying on the Anatolian Peninsula – the former ‘strategic anchor of the Free World against the Soviet Union’. While Iran’s declared aim ever since its revolution in the 1980s has been to end the foreign military presence in the Arabian Gulf and Middle East, and create an alliance that spans the Fertile Crescent and works in a coordinated manner that helps to consolidate Iran’s say across the entire region.

And as if the conflicting aims of the powers active in the Fertile Crescent were not enough to ensure that conflict and tension would persist, a Saudi Arabia that is obsessed by Iranian power and its effect on the balance of power in the Arabian Gulf, and an Israel that concerned about worried of its regional hegemony have added further fuel to the raging fire of the conflict.

As a result, the chapters of the ‘Great Game’ have continued to unfold, one after the other.