He is not talking about the Arabs’ freedom of movement between their states, but that of the Israelis and their goods. As for Israel’s borders they will remain as they are – shut down, tightly locked and secured even in the face of the Palestinians, the most prominent victims of this American “deal” 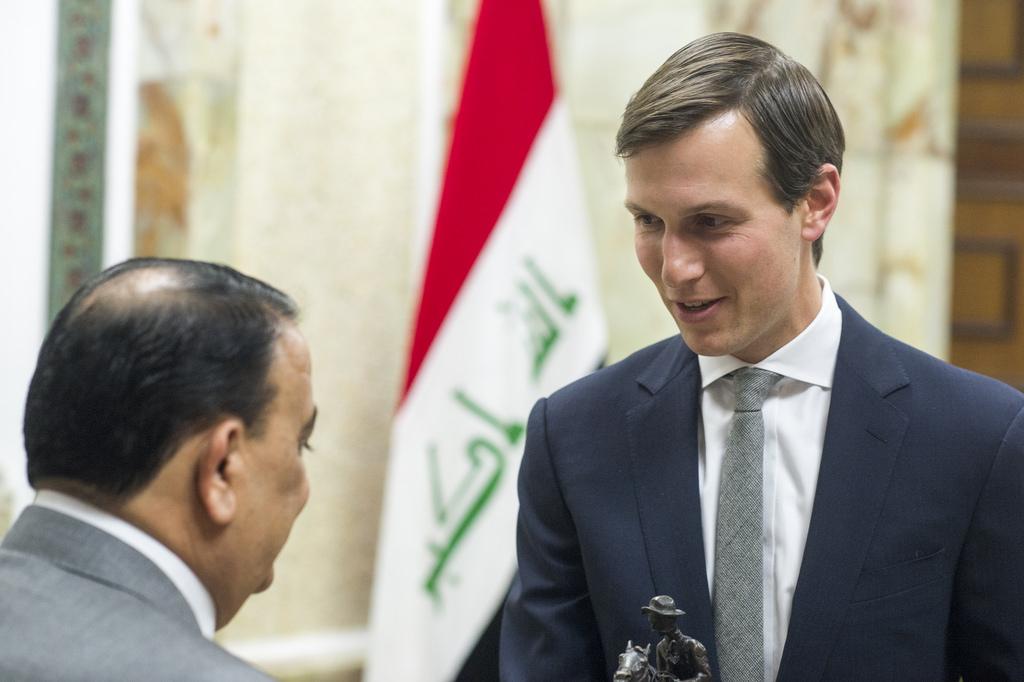 The ‘brief statements’ made by the U.S. president’s son-in-law and special advisor Jared Kushner to Sky News Arabia during his stop in Abu-Dhabi at the start of his Gulf tour reveal that the ‘deal of the century’ that he is promoting is based on four basic principles: ‘Freedom, dignity, security, and economic prosperity’. He added what we believe are the most important factors, namely, the Israeli people’s ability to merge into the region, the free flow of goods and people, and a resolution of the border and final status issues. But he said nothing about occupied Jerusalem throughout his interview, not even in passing.

The choice of five Gulf countries to visit– the UAE, Oman, Bahrain, Qatar, and Saudi Arabia – reveals the true aim behind this tour, which is to exert pressure on these governments to provide two-tier financing of this deal, whose details are supposed to be revealed as a final resolution of the Palestinian issue after the April 9th Israeli elections:

– The first tier consists of compensation to the Palestinian refugees in return for them fully ceding their right to return, directly or indirectly. And because the Gaza Strip hosts the largest number of refugees, who constitute 80% of its population, the U.S. president’s son-in-law wants the Gulf states to inundate the Strip with billions of dollars to finance economic projects that will create job opportunities for unemployed youths and ensure that they would forget the essence of their cause, which is the right of return, and drop resistance from their agenda. At the same time, these funds are supposed to provide an incentive to the neighboring countries to resettle the refugees in return for financial inducements.

– The second tier consists of some $250 billion to be paid to the Arab Jews who emigrated to occupied Palestine after 1948 in support of the Zionist project. For, from Kushner’s point of view as Netanyahu’s good student, there can be no final settlement without compensating them. In fact, an international accounting firm has been hired to come up with the details for this compensation in light of Israeli documents.

We do not know how the Gulf governments that Kushner and his accompanying delegation, consisting of the U.S. Middle East envoy Jason Greenblatt and Brian Hook, the U.S. State Department’s Special Representative for Iran, will respond to the demands and financial and investment projects that he is bringing with him. The inclusion of a U.S. advisor on Iranian affairs suggests that he may speak of the dire consequences and perhaps even threaten in case of noncompliance, brandishing the Iranian threat to regional security and stability, as happened in the recent Warsaw Conference.

Yesterday (Tuesday) Reuters quoted Gulf officials saying that Saudi King Salman would not accept any peace plan that does not include a Palestinian state with Jerusalem as its capital and the right of return. But public statements and leaks to the media are one thing, while what is said behind closed doors is another. We hope we are wrong, because the Kingdom’s negative or positive attitude towards this ‘deal’ will be of great importance in light of its powerful financial standing and its special relations with the current U.S. administration, which are experiencing some tension against the background of the journalist Jamal Khashoggi’s assassination, and that have placed the Kingdom in a weak a position to reject the U.S. demands.

Kushner’s four principles – freedom, dignity, security, and economic prosperity – are for the Israelis and not for the Arabs. After all, what value and credibility do they have if their sponsors, Kushner and his president, have taken occupied Jerusalem off the table and stopped financial aid to UNRWA in an attempt to put an end to everything having to do with the right of return?

Judging by Kushner’s words, the deal of the century not only entails normalized relations between the Arabs and Israel, it also means moving on to a phase of a political and military alliance based on the pretext of confronting the Iranian threat. This is what the American president’s son-in-law meant by ‘freedom of movement’ and eliminating borders. He is not talking about the Arabs’ freedom of movement between their states, but that of the Israelis and their goods. As for Israel’s borders, they will remain as they are – shut down, tightly locked, and secured even in the face of the Palestinians, the most prominent victims of this ‘deal’ should it be allowed to pass.

Despite intense Arab and American pressures, the PA in Ramallah’s refusal to receive any American envoy, including Kushner, in protest against this deal, the annexation and Judaization of Jerusalem, and moving the U.S. embassy to it reflects a positive patriotic position, provided that it continues and deepens. We are saying this because the PA’s stance is not so reassuring in light of its persistent security coordination and contacts with the Israelis.

The deal of the century cannot pass if it is strongly rejected by the Palestinians and if this is backed by genuine resistance in all its forms. This leads us to place our hands on our hearts in worry because of the embarrassingly timid official Palestinian reaction to the Arab states’ normalization with the occupation state, and these states’ willingness to open their doors to Netanyahu, his ministers, and his sports teams, and the recent Warsaw Conference. Not even one thousand-person-strong demonstration took place in Ramallah or Gaza against this normalization – which would have been the weakest manifestation of patriotism.

The fact that Kushner added Ankara to his itinerary at the last moment before his tour begins gives the impression that this meant is to pressure President Recep Tayyip Erdogan into agreeing to the aspect of this deal that has to do with Jerusalem – i.e., to consolidating it as the eternal Jewish capital of the occupation state. In return, Kushner will offer Erdogan certain financial and political rewards, some of which may have to do with the Syrian file. The hope is that Turkey’s rejection of this deal will offer a model to be emulated to some colluding Arabs, especially since President Erdogan adopted a firm position against moving the U.S. embassy to occupied Jerusalem and convened an urgent Islamic conference in Istanbul against that step.

The Arab and Islamic peoples, headed by the Turkish nation, must say a big ‘No’ to Kushner and his deal, because its passage would mean that the Arabs and the Muslims would have no dignity left and the occupation and Jerusalem’s Judaization would be consolidated forever, crowning Israel as the leader of the region.

We do not want to rush to making judgments. But we will continue to wager on the Arab peoples and their living national conscience and deep-rooted beliefs. And this allows us to be confident that this deal will not pass. For this nation has been stung twice, once from the [1979] Camp David snake pit and another time from the [1993] Oslo snake pit.

But it has only reaped disappointment, insults, and all forms of humiliation at the Israelis’ hands in return.