After a year of political deadlock, Netanyahu forms a new governing coalition that prioritizes annexing of the West Bank above all else — including the fight against the coronavirus. 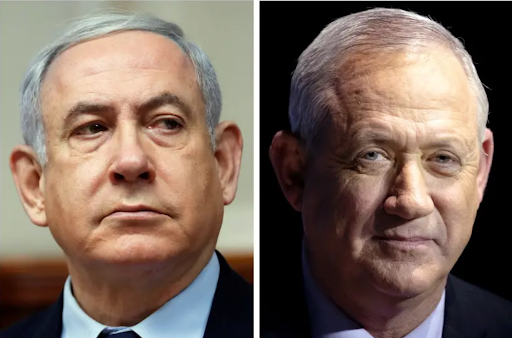 The coalition agreement signed between Likud and Blue and White on Monday night, which ushered in a new government following three elections and a political deadlock that has lasted over a year, is a strange sight to behold. The agreement, which will see Benjamin Netanyahu prime minister for 18 months before being replaced by Benny Gantz as alternate prime minister, is 14 pages long and goes into excruciating detail about the divvying up of ministerial portfolios and jobs. It also covers issues as wide-ranging as decisions about who will serve as ambassador to Australia and what will happen should there be an impediment to appointing Netanyahu or Gantz as prime minister.

One thing is missing entirely from the document, however: the new government’s policy goals and plans.

After a very general opening statement, according to which the government would “take all measures to curb the epidemic” (as if we thought for a moment Netanyahu and Gantz would outsource the management of the coronavirus crisis), formulate a plan to “come up with responses” to various issues, and deploy an ambiguous “economic and social safety net,” the reader finally happens upon a small yet significant sentence. “After the establishment of the government, a team will be established to formulate the basic principles of the government.” In other words, we will set up a government first, and only then will we decide exactly what its platform will consist of.

There are two notable exceptions to the government’s plan to come up with a plan. The first relates to the law to enlist ultra-Orthodox Jews into the IDF, while the second deals with the “application of sovereignty,” or in other words, annexation. While the clause on ultra-Orthodox conscription appears to be based on an agreement by both sides and effectively adopts the status quo vis-à-vis enlistment, annexation is a dramatic upending of the status quo in Israel-Palestine.

According to Israeli journalist Barak Ravid, Netanyahu’s intention of annexing the Jordan Valley and other parts of the occupied West Bank was one of the main sticking points in the negotiations to form a new government. Yet the deal removes from Gantz any veto power over decisions regarding annexation. As per the agreement, the government will be able to bring legislation to annex large parts of the West Bank to the cabinet or the Knesset starting on July 1. Yet this detail is provided within a clause that directly contradicts itself and, to a degree, the one preceding it, while also torpedoing any semblance of power balance between Netanyahu and Gantz.

The article that immediately follows, however, explicitly states that despite the fact during the first six months of its existence the government will be considered an emergency government and thus will not be able to promote “primary and/or secondary legislation” on issues unrelated to the fight against COVID-19, and despite the fact that the Knesset’s Ministerial Committee on Legislation will not be allowed to propose any legislation not previously agreed upon between the committee chairman headed by Blue and White and his/her deputy from Likud, Netanyahu can still ram annexation through without Gantz’s consent.

In fact, Article 29 allows the prime minister to “be able to bring the agreement reached with the United States on the application of sovereignty to a debate in the cabinet and the government for approval by the government or the Knesset” beginning on July 1. Moreover, it says that Netanyahu can bring the annexation proposal via one of his own MKs from Likud, effectively writing Gantz out of the process.

In other words, annexation overrides all other clauses in the coalition agreement, most perniciously the balance of power between Netanyahu and Gantz and the “state of emergency,” the very raison d’être for the formation of this government. It is as if annexation is the prime minister’s personal whim to be obeyed so as not to upset him, rather than the most significant political move that Israel has made since June 1967 when it occupied the West Bank, Gaza, and East Jerusalem.

Much can happen by July 1, so it is difficult to prophesize whether Netanyahu goes through with annexation, or just how much of the West Bank will be annexed to Israel. Much of this will depend on President Trump’s political situation and how much pressure Jordan and potentially Egypt exert on him — as well as pressure from Israel’s security establishment, which fears that annexation could lead to the collapse of its security coordination with the Palestinian Authority, and possibly Israel’s peace agreement with Jordan. Barring opposition from the White House, however, the way the coalition agreement was written means Netanyahu will find it very difficult to explain to his supporters any course of action that does not end with the annexation of the West Bank. In a sense, this section almost forces him to annex.

If that happens, it could create an absurd situation in which Gantz, who will spend the first 18 months of his term as defense minister, and future Foreign Minister Gabi Ashkenazi will have to defend a decision with the impact of a political nuclear bomb without any way of stopping it or even influencing its timing and scope. It is not unreasonable to assume that annexation will profoundly change Israel’s security situation and foreign relations, casting its shadow over the length of this government’s term. When Gantz takes over the Prime Minister’s Office in October 2021, it is very likely that the chain reaction caused by annexation will be the first issue he is forced to deal with. That very well may be Netanyahu’s sweet revenge against his political rival.