Is the EU legitimising Sisi’s coup?

Does monitoring presidential elections support a stable Egypt at the expense of human rights and democratic values? 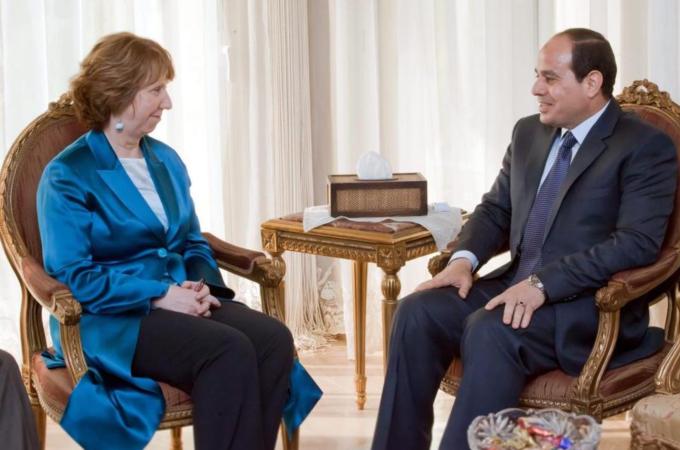 Rome, 22 aprile 2014, Nena News – Ten short months since the coup in Egypt and the European Union’s positioning towards the new Egypt gets more cynical by the day. Gone are the appeals in favour of victimised Muslim Brotherhood supporters. Gone even are the meetings – when Catherine Ashton, the EU’s most senior foreign policy chief, visited Cairo recently, she met only with Abdel Fattah el-Sisi and a leftist politician running against him.

Ashton attributed not meeting the Brotherhood to “logistical difficulties”, but a source within the Brotherhood confirmed she did not even contact the group before her trip. The Anti-Coup Alliancedescribed her visit as “evil”.

Many observers now believe this not only shows EU support of the government’s June 30 road map, but it also highlights the willingness of the government to ensure that the elections are seen as free from fraud and fair. The concern is that this will boost the legitimacy of the election results and will be used as a means to show that the new president was elected through a corruption-free democratic process. In sum, EU monitoring of the elections legitimises the coup.

Election monitors in Brussels take a different view. An official I recently spoke to said they want to ensure a new president is chosen fairly. They claim to still advocate on behalf of Brotherhood supporters, although Ashton’s refusal to meet with Brotherhood politicians on her latest trip suggests enthusiasm for their cause is waning fast.

It has not always been this way. Ashton had been the first foreign diplomat to visit former President Mohamed Morsi post-coup. Many other world leaders had requested meetings, and it was a testament to Ashton’s diplomatic abilities that only she had been able to secure a visit.

Ashton travelled to a secret location where Morsi was being held. She found him in good spirits, glad to see a friend and had a well-stocked fridge. She advised him it was unlikely he would return to power. Just after he’d been arrested, she’d tacitly given her approval for his ousting, urging the military to quickly organise new elections.

Ashton’s public statements after her secret meeting with Morsi now seem naive. In an interview with The Guardian shortly afterwards, she described how Egypt’s democracy needed to evolve.

“It means that the police work for the state. It means the judiciary operate independently, that the administration is not corrupt, that people’s rights are respected, that their views can be heard, and that people have the right to say no and the right to challenge governments respectfully.”

How little of that has been proven to be true? The police, and military, in no way worked for their elected president, instead orchestrating a coup against Morsi. They did so with a brutality that surpassed even former President Hosni Mubarak’s treatment of protesters in Tahrir Square.

Ashton herself said: “I condemn [their] use of violence.”

The judiciary, either at the behest of Sisi or playing out their own vindictive power-plays, have abandoned due process and fair treatment in favour of politically motivated charges against the Brotherhood.

The people no longer have the right to say “No”: Most of the anti-Sisi press has been shut down, and those who tried to vote against the new constitution were hounded off the streets, their posters ripped down. The Muslim Brotherhood has been falsely labelled a terrorist organisation. Those who played a key role back in Tahrir Square, activists like those in the April 9 Youth Movement, have also been detained. The more docile politicianshave dropped quietly into step with General Sisi.

In August, as the military demonstrated they were happy to use excessive force against Morsi supporters, we were told the EU was “urgently reviewing” its relations with Egypt. EU diplomats warned Egypt’s interim rulers that the people’s calls for democracy “cannot be disregarded, much less be washed away in blood”.

“The violence and the killings of these last days cannot be justified nor condoned,” said Ashton’s boss, Hermann von Rumpoy, in the same week over a thousand Brotherhood members and sympathisers lay dead in the streets.

Now all the bloodshed seems forgotten. Perhaps Ashton is simply a realist. The EU and Egypt are each others biggest commercial partners. Egypt buys machinery, pharmaceuticals and chemicals from Europe, and sells textiles and agricultural products. Since 2010, the two trading entities have also had a fisheries and agriculture agreement.

This bilateral trade reached a massive 24bn euros ($31.4bn) in 2012 – accounting for 23 percent of Egypt’s trade volume. The next biggest partner, China, accounts for less than half that. In short, returning Egypt to political stability will shore up bank balances in both Cairo and in the impoverished southern states of Europe.

Many ordinary people in Egypt also yearn for a return to political stability. The tourism industry has been all but destroyed. Sharm al-Sheikh, a holiday destination for Europeans and Americans, ducks behind a ring of steel, secured by the military against worsening jihadist activity in the Sinai.

The announcement that the EU would monitor the elections shouldn’t be a surprise. In February, EU trade negotiators called for discussions on a wider free-trade agreement to reopen. The month before, while other international observers refused to monitor a referendum over Egypt’s new constitution, the EU happily played their part.

The Carnegie Endowment for International Peace, refused to join EU monitors on grounds that assisting the new government would legitimise “an undemocratic process“. Michael Dune, Carnegie’s Middle East Programme senior associate, argued that post-coup “the Egyptian transitional governments [wanted] to focus attention on the technicalities of the post-coup political road map while diverting attention from a deeply troubled context”.

Another potential observer to the vote, the National Democratic Institute, described the coup in Egypt as “misguided”. The Transparency International Observation Mission observed that media coverage of the referendum had been one-sided, the state had used “violence, intimidation and repression”, that political party observers had not been allowed access to polling stations, and that “electoral violations” had not been investigated properly.

These criticisms still apply. Ashton’s decision to help the interim government – in place not because of democracy but because of violence – will in all likelihood be a boon for Sisi’s propaganda. It is unlikely that even if observers flag problems with the election, that they will be recognised or acted upon. Instead, the EU is putting trade above human rights.

The Brotherhood remain in jail, in court, or in exile. Morsi may have made serious errors during his time in power, but he does not deserve the show trial he is now enduring, nor do his family members, nor do his colleagues in the party, nor do the supporters in the streets who have died in support of the Brotherhood. An EU diplomat, close to Ashton, told me recently that the EU had not changed its stance on political transition in Egypt.

Apparently Sisi’s violence, and lack of respect for democratic principles, is not a problem for the EU.

Alastair Sloan is a London-based journalist. He focuses on injustice and human rights in the UK, and international affairs including human rights, the arms trade, censorship, political unrest and dictatorships.

The views expressed in this article are the author’s own and do not necessarily reflect Al Jazeera’s editorial policy.